Corals cozy up with bacterial buddies

Corals may let certain bacteria get under its skin, according to a new study by researchers at Woods Hole Oceanographic Institution (WHOI) and King Abdullah University of Science and Technology (KAUST) and soon to be published in the journal Applied and Environmental Microbiology. The study offers the first direct evidence that Stylophora pistillata, a species of reef-building coral found throughout the Indian and west Pacific Oceans, harbors bacterial denizens deep within its tissues.

“We have evidence that other species of coral also host these bacteria, and that they may play an important role in keeping a coral healthy,” says Amy Apprill, a WHOI assistant scientist who co-directed the study along with KAUST Assistant Professor Christian Voolstra. KAUST post-doctoral scholar Till Bayer was the lead author of the study.

Researchers have known for decades that most corals don’t like to live alone. Reef-building corals are known to have symbiotic, or mutually beneficial, relationships with single-celled algae. More recent evidence has suggested that bacteria, fungi, and viruses are also part of the mix—especially a group of bacteria called Endozoicomonas, which has been associated with a number of coral species around the world. But scientists haven’t been able to pinpoint where exactly Endozoicomonas lives—in the coral’s tissues or on its surface layer—or what it does there. 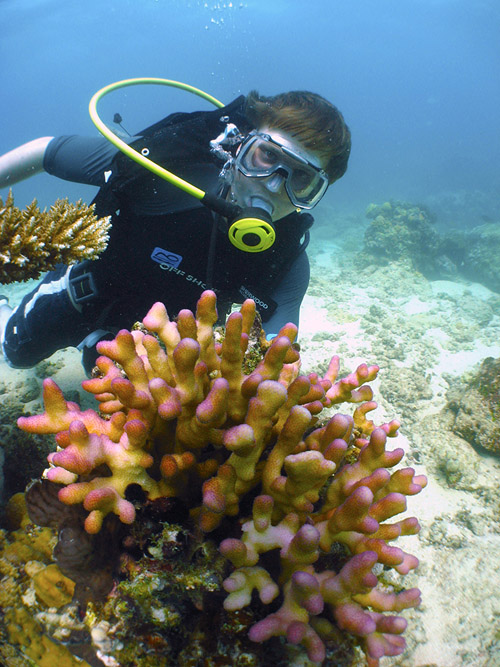 KAUST-based coral scientist Christian Voolstra gathered samples of the coral species Stylophora pistillata. Earlier sampling methods ground up and mixed together the coral’s surface, tissue, and skeletal layers to obtain genetic information, making it impossible to tell where exactly the genetic information came from. This time, Voolstra and the researchers used a microscopy-based technique and were able to determine that Endozoicomonas lives within the tissue layer. (Photo by Michael Berumen, Woods Hole Oceanographic Institution)

Through a research partnership between WHOI and KAUST in Saudi Arabia, Apprill and a diverse team of WHOI and KAUST researchers were able to gain access to the pristine coral reef colonies of the Red Sea. There, they used DNA-based techniques to uncover an abundance of Endozoicomonas genes associated with the coral Stylophora pistillata. The team then created a DNA “probe”—a fragment of DNA designed to fit into the bacterium’s genetic code like a missing puzzle piece—that would light up when it connected with Endozoicomonas genes. Guided by the probe’s fluorescence, the researchers were able to spot Endozoicomonas living deep within the coral’s tissue.

“These weren’t single cells—they were living together in a clump, like a bunch of grapes on a stem,” says Apprill. “That was pretty exciting, because we had not thought about them living like this before.”

Although Endozoicomonas bacteria had previously been linked to coral colonies throughout the world’s oceans, as well as to some species of sponges and sea slugs, this study is the first to directly show the bacteria living within any marine animal. Now, Apprill says, the real mystery is what it’s doing there.

“When we look at healthy corals, we see these really well-established microbial relationships,” says Apprill. Voolstra further adds: “Endozoicomonas make up a good portion of the bacterial biomass which further tells us that they must be doing something important.” Both researchers agree that the next task is to figure out what they’re doing—why the coral lets them in at all—to understand how they benefit the coral. 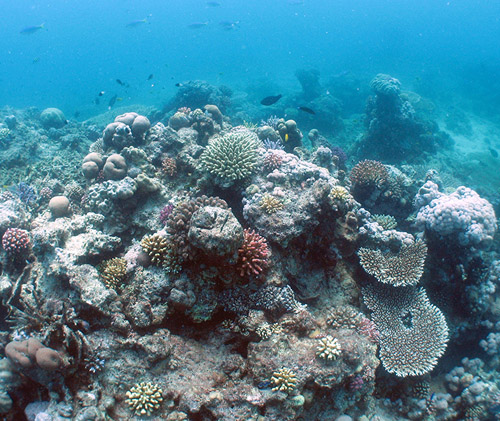 The reef-building coral Stylophora pistillata, commonly known as the smooth cauliflower coral, lives alongside other coral species in the reefs of the Red Sea. Past studies have linked this and other species to a group of bacteria called Endozoicomonas, but were unable to determine whether the bacteria lived within the coral. Now researchers have found that it resides deep within the coral’s tissues and may help protect the coral from disease. (Photo by Christian Voolstra, KAUST)

Apprill suspects the bacteria may help the coral recycle nutrients to stay healthy. She and her colleagues are currently designing new experiments to determine how the coral’s relationship with its bacterial companions works.

“This is not an easy task,” says Apprill, who plans to draw from studies of the human bacterial microbiome to explore the role of the coral’s bacterial communities. Future studies will focus on searching the Endozoicomonas group’s genetic code for bits of DNA that are associated with particular functions in other bacteria, and looking at other coral species to see if the bacteria lives inside them as well.

Understanding the bacteria’s relationship with Stylophora pistillata and other reef-building species could prove critical as corals face a growing number of threats to their health and survival.

“Corals are highly susceptible to the impacts of climate change, coastal development and overfishing,” says Apprill. “In order for scientists to predict the future success of corals, we need to understand their basic biology, including how their microorganisms may aid in keeping them healthy.”

As the team works to shed light on coral’s symbiosis with bacteria, it’s strengthening another mutually beneficial partnership: the multi-year collaboration between WHOI and KAUST, a new world-class, graduate-level scientific research university opened in 2009 along the shores of the Red Sea. Apprill worked closely with a number of KAUST researchers, including marine scientist Christian Voolstra, Syrian-born graduate student Areej Alsheikh-Hussain and WHOI-KAUST joint postdoctoral scholar Matthew Neave, to gather Stylophora pistillata samples, to extract and to analyze the genetic data it contained.

“This study wouldn’t have been possible without this collaboration,” says Apprill. “Working with people from different institutions who think differently from you leads you to think about things in new ways, and in this case to make new discoveries.”

The research was supported by a KAUST-WHOI Special Academic Partnership Fellows award, the WHOI internal funds, and a grant from the National Science Foundation.