In recent years it has been established that copper plays an essential role in the health of the human brain. Improper copper oxidation has been linked to several neurological disorders including Alzheimer’s, Parkinson’s, Menkes’ and Wilson’s. Copper has also been identified as a critical ingredient in the enzymes that activate the brain’s neurotransmitters in response to stimuli. Now a new study by researchers with the U.S. Department of Energy (DOE)’s Lawrence Berkeley National Laboratory (Berkeley Lab) has shown that proper copper levels are also essential to the health of the brain at rest.

“Using new molecular imaging techniques, we’ve identified copper as a dynamic modulator of spontaneous activity of developing neural circuits, which is the baseline activity of neurons without active stimuli, kind of like when you sleep or daydream, that allows circuits to rest and adapt,” says Chris Chang, a faculty chemist with Berkeley Lab’s Chemical Sciences Division who led this study. “Traditionally, copper has been regarded as a static metabolic cofactor that must be buried within enzymes to protect against the generation of reactive oxygen species and subsequent free radical damage. We’ve shown that dynamic and loosely bound pools of copper can also modulate neural activity and are essential for the normal development of synapses and circuits.”

Chang , who also holds appointments with the University of California (UC) Berkeley’s Chemistry Department and the Howard Hughes Medical Institute (HHMI), is the corresponding author of a paper that describes this study  in the Proceedings of the National Academy of Sciences (PNAS).  The paper is titled “Copper is an endogenous modulator of neural circuit spontaneous activity.” Co-authors are Sheel Dodani, Alana Firl, Jefferson Chan, Christine Nam, Allegra Aron, Carl Onak, Karla Ramos-Torres, Jaeho Paek, Corey Webster and Marla Feller.

Although the human brain accounts for only two-percent of total body mass, it consumes 20-percent of the oxygen taken in through respiration. This high demand for oxygen and oxidative metabolism has resulted in the brain harboring the body’s highest levels of copper, as well as iron and zinc. Over the past few years, Chang and his research group at UC Berkeley have developed a series of fluorescent probes for molecular imaging of copper in the brain.

“A lack of methods for monitoring dynamic changes in copper in whole living organisms has made it difficult to determine the complex relationships between copper status and various stages of health and disease,” Chang said. “We’ve been designing fluorescent probes that can map the movement of copper in live cells, tissue or even model organisms, such as mice and zebra fish.” 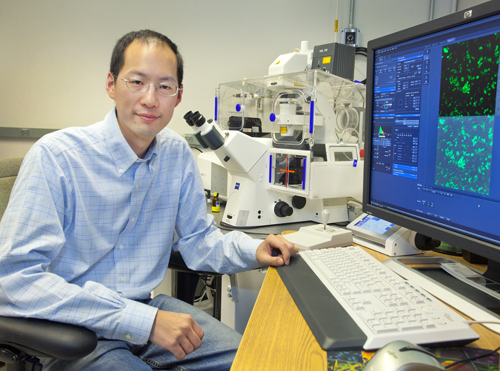 Chris Chang is a faculty chemist with Berkeley Lab and UC Berkeley, and an HHMI investigator. (Photo by Roy Kaltschmidt)

For this latest study, Chang and his group developed a fluorescent probe called Copper Fluor-3 (CF3) that can be used for one- and two-photon imaging of copper ions. This new probe allowed them to explore the potential contributions to cell signaling of loosely bound forms of copper in hippocampal neurons and retinal tissue.

“CF3 is a more hydrophilic probe compared to others we have made, so it gives more even staining and is suitable for both cells and tissue,” Chang says. “It allows us to utilize both confocal and two-photon imaging methods when we use it along with a matching control dye (Ctrl-CF3) that lacks sensitivity to copper.”

With the combination of CF3 and Ctrl-CF3, Chang and his group showed that neurons and neural tissue maintain stores of loosely bound copper that can be attenuated by chelation to create what is called a “labile copper pool.” Targeted disruption of these labile copper pools by acute chelation or genetic knockdown of the copper ion channel known as CTR1 (for copper transporter 1) alters spontaneous neural activity in developing hippocampal and retinal circuits. 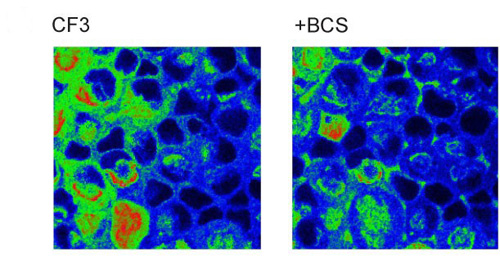 “We demonstrated that the addition of the copper chelator bathocuproine disulfonate (BCS) modulates copper signaling which translates into modulation of neural activity,” Chang says. “Acute copper chelation as a result of additional BCS in dissociated hippocampal cultures and intact developing retinal tissue removed the copper which resulted in too much spontaneous activity.”

The results of this study suggest that the mismanagement of copper in the brain that has been linked to Wilson’s, Alzheimer’s and other neurological disorders can also contribute to misregulation of signaling in cell−to-cell communications.

“Our results hold therapeutic implications in that whether a patient needs copper supplements or copper chelators depends on how much copper is present and where in the brain it is located,” Chang says. “These findings also highlight the continuing need to develop molecular imaging probes as pilot screening tools to help uncover unique and unexplored metal biology in living systems.”

This research was supported by the National Institutes of Health and the Howard Hughes Medical Institute.

For more information about the research of Chris Chang’s lab, visit his Website here.