The ‘Breaking Bad’ Syndrome? UCLA anthropologist exposes the moral side of violence

To the extent that their heinous behavior can be understood, murders, wife beaters, gang bangers and other violent criminals are acting out of a breakdown of morals, right? Not so fast, say social scientists from UCLA and Northwestern University.

In a new book, Alan Page Fiske and Tage Shakti Rai ascribe most acts of violence to a truly surprising impulse: the desire to do the right thing.

“When someone does something to hurt themselves or other people, or to kill somebody, they usually do so because they think they have to,” explained Fiske, a UCLA professor of anthropology and lead author of “Virtuous Violence,” which is being published Jan. 15 by Cambridge University Press. “They think they should do it, that it’s the right thing to do, that they ought to do it and that it’s morally necessary.”

Co-author Rai said killings and physical attacks are often committed in retribution for wrongs — real or perceived — or as an effort to teach lessons and instill obedience or, amazingly, an attempt to rectify a relationship that in the perpetrator’s mind has gone awry and cannot be corrected in any other way.

“We’re not talking just about the way perpetrators excuse or justify their behavior afterwards,” said Rai, Fiske’s former graduate student at UCLA and now a postdoctoral fellow at Northwestern’s Kellogg School of Management. “We’re talking about what motivates them to do it in the first place. 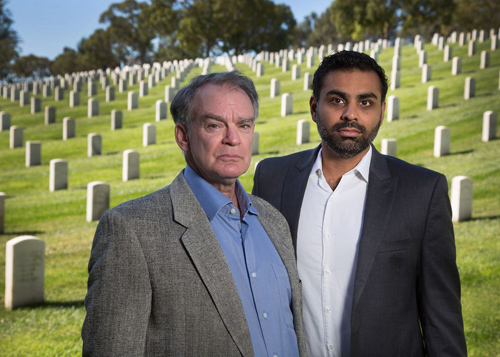 Fiske and Rai arrived at their startling conclusion after analyzing a wide array of scholarly research on violence, including thousands of interviews with violent offenders. Their book quotes from real-life perpetrators as well as those from works of fiction, ranging from “The Iliad” to “Huckleberry Finn.”

“When we started writing this book, we thought, ‘We’ll never figure out what really motivates perpetrators of violent acts,’” Fiske said. “But actually it turned out not to be that hard.”

They even uncovered moral motivations behind suicide, war and rape, and the authors say the finding transcends modern and historical cultures.

The authors admit there are exceptions — people who don’t have such virtuous motivations for their violent acts. But those exceptions typically are psychopaths, who make up just a small fraction of the general population and account for a small portion of violence. And when people with other mental illnesses commit acts of violence, they often do so believing they are doing the right thing.

Probably the most familiar example in the book is beating children. Increasingly frowned on today, the spare-the-rod-spoil-the-child approach to child rearing was once widely condoned by parents and educators as a disciplinary tool. Fiske and Rai quote parents from days gone by expressing fear of shortchanging a child’s moral development on occasions when they withheld corporal punishment.

While the impetus is slightly different for spousal abuse, the perpetrator also is convinced he or she is in the right. Fiske and Rai found that many abusers feel entitled — even obligated — to use violence to redress wrongs that they perceive themselves to have suffered, and to sustain what seems to them to be the right kind of relationship.

Indeed, using violence to redress wrongs has been ubiquitous throughout history, they point out, citing burning of witches, killing of adulterers and honor suicides by those who believed they had failed to do their duty.

Fiske is best known for developing “relational models,” a widely cited theory of behavior that describes all human interactions in one of four simple kinds of relationships. He and Rai argue in the new book that it is often a terribly misguided impulse to rectify a perceived violation of one of those relationship structures that compels someone to commit a violent act. For example, they explain, a perceived breach of the “hierarchical relationship” is often at the root of rape.

Violent acts might usually appear unjustifiable to outsiders, but peers, family members or other members of the perpetrator’s social circle likely view them as necessary measures. Indeed, close relations accuse the perpetrator of being weak and cowardly if he doesn’t act. An example is the gang member who retaliates for an attack on of one of his own.

“Social workers and newspaper readers don’t think gang members should be killing each other, but within the gang they do,” Fiske said.

The authors emphasize that they do not condone violence, but they believe that stemming violence requires that we first understand what motivates it. They note that successful gang and spousal abuse intervention programs concentrate on convincing perpetrators that, contrary to their beliefs, their actions are widely viewed as immoral and unacceptable.

“All you have to do,” Fiske said, “is convince the people who are violent that what they’re doing is wrong.”