ANN ARBOR, Mich.—The first of nine rock reefs is under construction in the St. Clair River delta northeast of Detroit. The goal of the project, which is led by Michigan Sea Grant, is to boost populations of lake sturgeon and other rare native fish by providing river-bottom rock structures where they can spawn.

The rock reefs are designed to assist several native species that are considered threatened or endangered in Michigan, including lake sturgeon, mooneye, the northern madtom catfish and the river redhorse sucker. Walleye, a popular sport fish, and commercially important lake whitefish should also benefit. 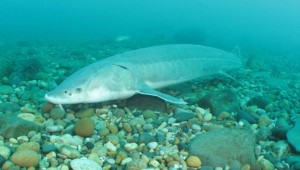 The new reefs will be constructed in the Middle Channel of the St. Clair River delta, near an existing lake sturgeon spawning site. The $1.1 million St. Clair project is a follow-up to rock reefs built on the Detroit River in 2004 and 2008.

“We’ve been working together on these reefs for more than 10 years now, and over the course of time we’ve really figured out what kinds of physical characteristics the fish are attracted to,” said project leader Jennifer Read, acting director of Michigan Sea Grant, a cooperative program of the University of Michigan and Michigan State University. Michigan Sea Grant is a Center of Excellence at the U-M School of Natural Resources and Environment.

“A long-term goal of this team is to create enough fish-spawning habitat in the river so that we have really robust, self-sustaining populations of lake sturgeon, whitefish and walleye,” Read said. “We’re not sure yet how much is enough. That’s something that the team is really thinking hard about.”

Each of the nine rock reefs in the Middle Channel will be 120 feet long, 40 feet wide and 2 feet high. They will be 25 to 30 feet below the water’s surface – deep enough to prevent plant growth or interference with boat traffic. Two hundred boulders will be placed downstream of the nine reefs to provide a safe place, out of the current, for fish to gather before spawning. 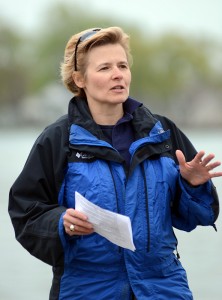 The reefs are composed of 4-to-8-inch chunks of angular limestone and rounded fieldstone. Crevices between the loosely piled rocks are designed to protect fish eggs from being washed downstream or consumed by predator fish.

Beginning in the early 1900s, the rivers connecting lakes Huron and Erie were straightened, widened and deepened to create shipping channels for large freighters. Dredging and blasting of the channels eliminated many natural fish-spawning sites, contributing to population declines in several species, including lake sturgeon.

Even so, the Huron-Erie connecting channels – the St. Clair River, Lake St. Clair and the Detroit River – continue to provide enough spawning habitat for growth of the largest remaining population of lake sturgeon in the Great Lakes, according to Michigan Sea Grant. Lake sturgeon can grow up to 6 feet in length, weigh up to 100 pounds, and can live more than 100 years.

The new Middle Channel reefs will be built near an existing lake sturgeon spawning reef that was inadvertently created more than a century ago when steam-powered freighters dumped coal cinders into the river.

“The sturgeon are here in great numbers to spawn at that little reef, and the problem is there’s not enough room there for all of them,” said Bruce Manny, a U.S. Geological Survey fishery biologist who has worked on the reef-building projects for more than a decade.

“The reefs that we are building now are probably 10 to 20 times the size of the little spawning ground that’s already here, so they should produce a lot more fish than that little postage stamp,” Manny said during a recent tour of the reef construction site. “We expect to get success here immediately with lake sturgeon, and that should really give them a boost in the St. Clair River.”

An illustration showing the dimensions of the rock reefs under construction on the St. Clair River. Image courtesy of Michigan Sea Grant

The St. Clair River delta project is part of a long-term collaboration between federal, state, provincial and private groups interested in restoring lake sturgeon productivity in the Huron-Erie Corridor. Taken together, the Detroit River and St. Clair River reef-building projects represent the largest effort to date to restore a primitive, wild fish within a major urban area in the Great Lakes region.

Detroit River rock reefs were built near Belle Isle in 2004 and near Fighting Island in 2008. At least 14 fish species now spawn on the Belle Isle reefs, and spawning lake sturgeon were documented at the Fighting Island site in 2009 and 2010, said James Boase, a U.S. Fish and Wildlife Service fishery biologist and member of the project’s science team.

In addition to being close to a known lake sturgeon spawning site, the new St. Clair River delta reefs will be just upstream from wetlands that should shelter many species of newly hatched fish, allowing them to mature, Boase said. 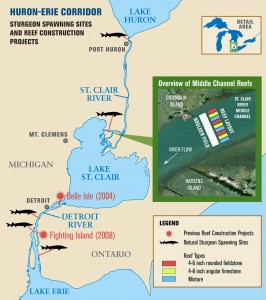 Map showing location of the St. Clair River reef project, along with similar reef projects built on the Detroit River in 2004 and 2008. Image courtesy of Michigan Sea Grant

“This location is in close proximity to very good real estate for lake sturgeon and other native species of fish,” he said. “Fish larvae are going to drift downstream and end up in either the deep channels or backwater delta areas, which are going to be very good nursery grounds that will help those fish survive and make it to adulthood.”

Construction of the nine St. Clair River rock reefs is expected to be completed this month. Funding for the project was provided by an $880,233 National Oceanic and Atmospheric Administration grant through the federal Great Lakes Restoration Initiative, $75,000 from the U.S. Fish and Wildlife Service Coastal Program and $162,807 in non-federal matching funds.

Two more large spawning reefs for native fish are being planned for the St. Clair River in 2013 and 2014, with funding from the Great Lakes Restoration Initiative.