In 2010, China mined the record amount of gold in the world. The production volume of nonferrous metals in China amounted to 340.88 tons, which is 8.57% higher than a year earlier, and continues to grow. In recent years, China has consistently increased the amount of its gold reserves. Nevertheless, experts believe that China has a long way to go to reach the level of the world leading economies.

According to the China Gold Association, in 2007 China ranked first in terms of gold mining. It outran South Africa and is holding this position to this day. Starting 2004, the volume of production of the precious metal in China has been steadily growing. In 2009 it amounted to 313.98 tons. The volume of the gold imported by China within ten months of 2010 amounted to 209.72 tons, which is six times more than the year before, Rosbalt reported. 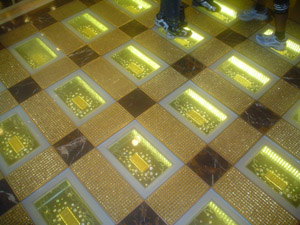 China has discovered the precious metals market only in the last decade. In 1949 the country started the production of the metal and produced 4.07 tons of it. As reported by Jewelport.net, in 2008 China consumed 395.6 tons of gold. Gold mining first crossed the threshold of 300 tons in 2009. Almost 60% of total output in 2009 came from five provinces – Shandong, Henan, Jiangsu, Fujian and Yunnan. Statistics show that as of 2009 there were over 700 producers of gold in China, 500 fewer than in 2002.

In December, consulting agency GFMS reported that China will outrun India and become the world’s largest consumer of gold. The country’s leadership believes that the increase in gold production has enhanced China’s ability to withstand the crisis risks. In addition, it has a significant meaning in ensuring economic and financial security of the country, Interfax quoted local media news agencies.

During the last few years China has been experiencing a period of economic prosperity and rapid expansion of the capital. The country’s economy unexpectedly grew by 8.7% in 2009, while the GDP in the last quarter has reached 10.7%. In addition, the country has increased the volume of direct foreign investment, long-term investments, new loans and monetary supplies. During the same period the Western world has faced a deep recession and is only now beginning to recover. It is expected that the continuous improvement of quality of life, increase of savings rates for individuals and rising incomes will help to create sustainable demand for gold in China, Goldenfront.ru stressed.

It should be also noted that last year Russia ranked fifth as the world’s largest gold producer after China, Australia, USA and South Africa, producing 205.2 tons. It is easy to explain, because the interest of central banks of various countries to gold has grown during the global financial crisis, since gold is considered a low-risk asset. Last year the prices rose by nearly 30%, reaching a historic high of $1,430.95 per ounce.

Deputy Chairman of the Central Bank of Russia, Georgy Luntovsky, previously reported that the bank’s gold reserves have increased by 280 tons over the past two years and continue to grow at similar rates, and annual purchases will amount to no less than 100 tons. Gold sales by central banks of the Eurozone amounted to less than 1 ton in late September of 2010, in the beginning of the second year of the Agreement of the Central Banks on gold, WGC report stated. Under the agreement, the central banks cannot sell over 400 tons of gold per year to avoid pressure on prices. Overall, since the end of September, central banks have sold 52.2 tons of gold, including the sales by International Monetary Fund, which has not signed the agreement. During the first year of the agreement total sales amounted to 136 tons.