Further establishing the studio as a market leader in mobile marketing, Universal, through the Tag campaign, will enable smartphone users to interact with full-page ads that will run in several magazines, including Cosmopolitan, InStyle, People StyleWatch and Us Weekly. When the Tags are scanned by the free Tag Reader app, users will be able to watch the “Bridesmaids” trailer and access additional movie information and content. With this campaign, Universal becomes the first major film studio to use Tag technology to promote a first-run, nationally released movie.

In “Bridesmaids,” Kristen Wiig leads the cast as Annie, a maid of honor whose life unravels as she leads her best friend, Lillian (Maya Rudolph), and a group of colorful bridesmaids (Rose Byrne, Melissa McCarthy, Wendi McLendon-Covey and Ellie Kemper) on a wild ride down the road to matrimony. 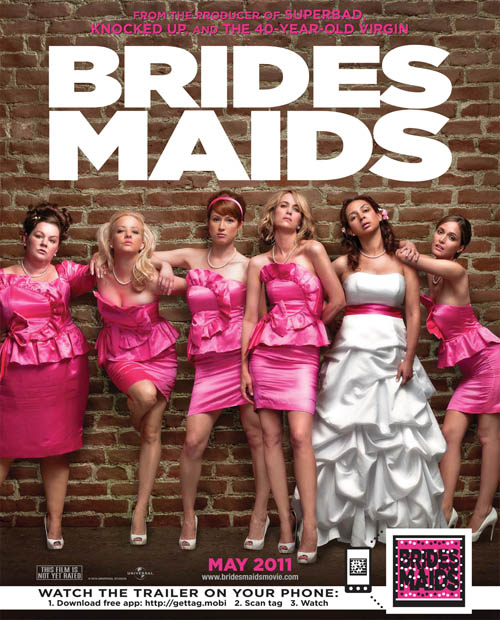 The Microsoft Tag campaign will enable smartphone users to interact with full-page ads for "Bridesmaids" in several major magazines, watching a trailer for the film and accessing additional movie information and content. Image credit: Microsoft

“We’re excited to use Microsoft Tag and this new form of mobile tagging technology to reach our audience,” said Doug Neil, senior vice president of digital marketing for Universal Pictures. “We look forward to incorporating Tag to extend our marketing for ‘Bridesmaids.’”

Microsoft Tag has already seen traction in print materials as a way to link consumers to information, entertainment and interactive experiences on mobile phones. With Tag, Universal Pictures will engage the audience for “Bridesmaids” by offering a highly scalable, branded mobile experience that goes beyond the printed page to generate interest and excitement around the comedy. The simple yet powerful Tag dashboard enables next-generation mobile tagging functionality, including the ability for studios and marketers to scale or change the user’s mobile experience with behind-the-scenes movie footage, interviews with the talent and director, fun contests, trivia, and much more.

“We’re excited that Universal Pictures is using Tag to reach its target audience and promote ‘Bridesmaids,’” said Bill McQuain, director of Tag product management at Microsoft Corp. “Microsoft Tag engages users when and where they’re most interested, and we’re thrilled with the way Universal Pictures chose to implement our technology to offer a richer, interactive brand experience for moviegoers.”

The “Bridesmaids” official site may be found at https://www.bridesmaidsmovie.com.