A chemical signature recorded on the ear bones of Chinook salmon from Alaska’s Bristol Bay region could tell scientists and resource managers where they are born and how they spend their first year of life.

This bone, called an otolith, accumulates layers as a fish grows, similar to trees. These “growth rings” are produced throughout a salmon’s life. Scientists can tell where the fish lived by matching the chemical signatures of the otolith with the chemical signatures of the water in which they swim, according to a study published May 15 in the online, open-access journal Science Advances. 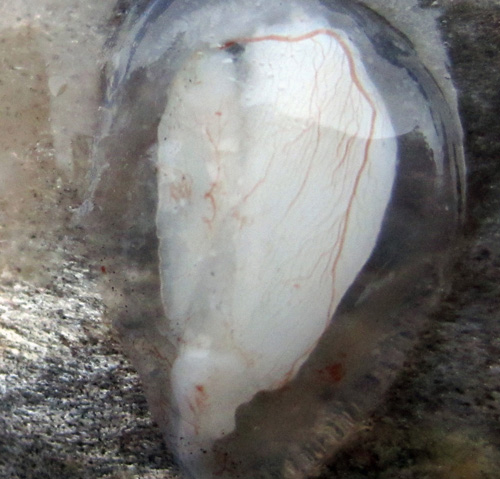 This otolith has been extracted from a fish. It is still within its fluid sac which is surrounded on the outside by blood vessels. Image credit: Sean Brennan, UW

“Each fish has this little recorder, and we can reveal the whole life history of the fish from the perspective of the otolith. Each growth ring is a direct reflection of the environment the fish was swimming in at the time it was formed,” said lead author Sean Brennan, who completed the study as a doctoral student at the University of Alaska Fairbanks. He is now a postdoctoral researcher in the University of Washington’s School of Aquatic and Fishery Sciences. 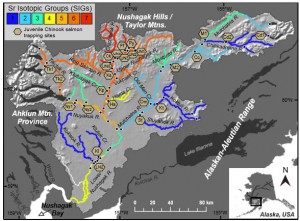 This chemical signature comes from isotopes of the trace element strontium, found in bedrock. Strontium’s chemical makeup varies geographically. As rushing water weathers the rocks, the element is dissolved and released into the water. The dissolved strontium ions get picked up by fish, either through the gills or gut lining, then are deposited onto the otolith.

As strontium makes its way from rocks into the otoliths of fish swimming in the rivers, its chemical signature does not change, and so it serves as a robust tag that can tie each fish as being in a specific location in the river at a specific time.

“This particular element and its isotopes are very strongly related to geography,” said Matthew Wooller, director of the Alaska Stable Isotope Facility at University of Alaska Fairbanks and a co-author of the paper. “It is a really good marker for where animals have been and whether they move around in their environment.”

This process relies on a river system that has been mapped extensively for its strontium isotope variation. In general, watersheds that are diverse in the types and ages of rocks will also have a lot of variation in strontium isotope signatures – and thus are good candidates for using this technique, Brennan said.

“Alaska is a mosaic of geologic heterogeneity,” he added. “As long as you can look at a geologic map and see rocks that are really different, that’s a good potential area.” 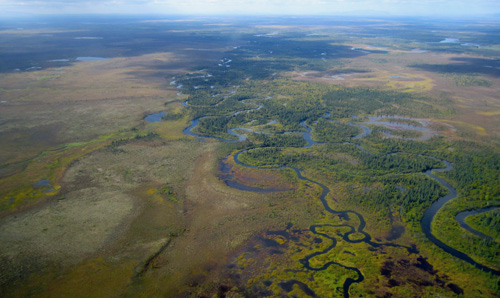 One of the many tributaries to the Upper Nushagak River. Image credit: Sean Brennan, UW

The Bristol Bay region in Alaska produces some of the last remaining wild salmon runs in the world. The area is perhaps best known for its sockeye salmon commercial fishery, but Chinook salmon, particularly those in the Nushagak River where this study took place, supply important subsistence and sport fisheries for the region. The Nushagak Chinook salmon are also the third biggest run in Western Alaska, ranking it as one of the largest worldwide.

About 200,000 Chinook make their way each summer from the ocean to spawn in the river’s upper tributaries and streams. When their eggs hatch in the spring, young Chinook salmon spend a whole year in the river, feeding and growing before migrating to the Bering Sea and the Pacific Ocean. 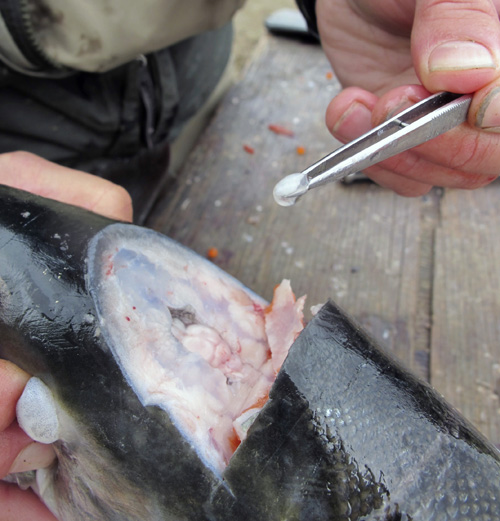 An otolith is pulled out from inside the brain cavity of a Chinook salmon.Image credit: Britta Retzlaff Brennan

Scientists need a way to determine the birth streams of adult Chinook when they are caught in coastal fisheries. Once they have that information, they can begin to understand how freshwater habitat, the movement of fish and environmental factors can affect fish survival. Alaska’s Chinook salmon populations have declined dramatically in the past decade, and scientists are still trying to determine why.

“This is science responding to a societal issue and need,” said co-author Christian Zimmerman, U.S. Geological Survey ecologist and chief of water and interdisciplinary studies at the USGS Alaska Science Center in Anchorage. “Using this approach, we will be able to map salmon productivity and determine how freshwater habitats influence the ultimate number of salmon. With declines in Chinook salmon in Western Alaska, fishery and land-use managers need better information about freshwater habitats to guide conservation.”

Using data collected from adult salmon in 2011, the researchers not only determined which parts of the river produced the most fish but also found that the majority of Chinook salmon in the Nushagak watershed stayed in the same place for their entire first year before they migrated to the ocean. About 20 percent left their birthplace for short forays in the river’s lower main stem before swimming to the ocean. 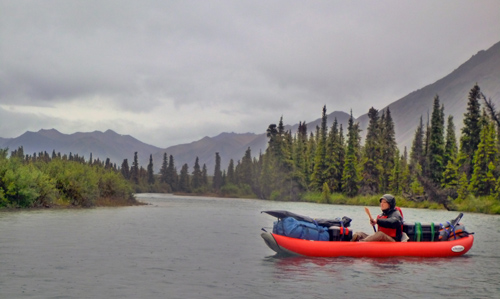 Brennan now works with Daniel Schindler at the UW, where they will expand this work to include sockeye salmon in the same river. They will collect three years of Chinook data and two years of sockeye by end of the project, which will help determine whether birth and life history patterns in Alaskan rivers vary across years, or remain consistent.

The techniques used in Brennan’s study can also help scientists understand the behavior of other animal populations. Strontium also accumulates in things like bird feathers and teeth and also survives even after being fossilized. This allows researchers to study the movements of a wide range of animals including seals, whales, bison, ancient human populations and even dinosaurs.

This research was funded by Alaska Sea Grant and the U.S. Geological Survey National Institute of Water Resources program.