A new study reorders the timing and reveals the climate impact of nearly 300 major volcanic eruptions worldwide, dating back to the early Roman period.

The analysis, published July 8 in the journal Nature, resolves longstanding inconsistencies between historic atmospheric sulfate data taken from ice cores and corresponding temperature data derived from tree rings and other sources. The new chronology of volcanic eruptions reveals that such eruptions had a significant and repeated impact on global climate.

“Previously, there seemed to be a big delay between the dating of eruptions and big dips in tree-ring growth, so that researchers were forced to infer that either the eruptions didn’t actually impact climate, or that there must have been an error in the dating of tree-ring records,” said co-author Francis Ludlow, a postdoctoral fellow at the Yale Climate & Energy Institute.

“We also show in the paper that a lot of quite dramatic accounts in ancient records of weakened or discolored sunlight from ancient Babylon to China now match the dates of big eruptions, so that these historical records are really recording high-altitude volcanic sulfuric aerosols and dust,” Ludlow said. 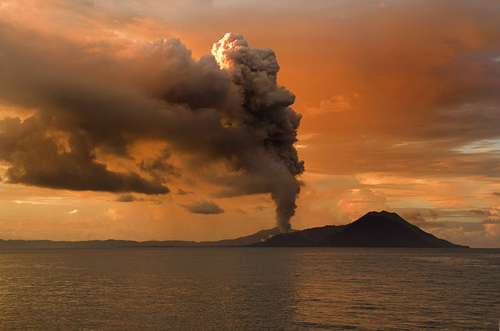 An international team of researchers contributed to the study, which was led by scientists from the Desert Research Institute (DRI) in Nevada. The researchers analyzed multiple, deep ice cores taken from ice sheets in Greenland and Antarctica.

The study found that 15 of the 16 coldest summers recorded between 500 B.C. and A.D. 1,000 followed large volcanic eruptions. Previous ice-core timelines were off by five to 10 years in the first millennium A.D., with discrepancies beginning to accumulate from the mid-1200s. This prevented scientists from connecting volcanic eruptions with many major human events such as famine and plague.

“Using new records we are able to show that large volcanic eruptions in the tropics and high latitudes were the dominant drivers of climate variability, responsible for numerous and widespread summer cooling extremes over the past 2,500 years,” said lead author Michael Sigl, assistant research professor at DRI and a postdoctoral fellow with the Paul Scherrer Institute in Switzerland.

Ludlow co-designed the study and led its analysis of historical sources. The work included identifying, translating, and interpreting cryptic human observations from China, Babylon, and Europe from as early as 255 B.C., a year in which an observer in Babylon noted that the disk of the sun resembled that of the moon, indicating the presence of high altitude volcanic dust and sulfate.

Ludlow said the new timeline helps resolve the origin of one of the most dramatic climatic downturns in recent human history: A period of unusually cold summers from A.D. 536-550 in the Northern Hemisphere that likely contributed to crop failures, famines, and plague.

“Before the new chronology, there were no eruptions that could have convincingly caused such a prolonged period of climatic and social disturbance,” Ludlow said, “but with the new dating we can now identify a major eruption in the high latitudes of the Northern Hemisphere in 536, followed by another huge eruption in the tropics around c. 540. It was this double-whammy that led to such severe and prolonged impacts.”