The amount of carbon dioxide escaping from rivers and streams into the atmosphere is much larger than previously thought, according to a new study that maps for the first time the flux of CO2 from inland waters worldwide. Published in the journal Nature, the research reveals the major role these waterways play in the global carbon cycle, the authors said.

“This study solidifies the significance of inland waters as conduits of exchange and provides a framework for inclusion of this exchange in regional and global studies,” said lead author Peter A. Raymond, a professor of ecosystem ecology at the Yale School of Forestry & Environmental Studies (F&ES). “Understanding how ecosystems exchange carbon is important, as they currently offset a significant percentage of emissions caused by human activity.” 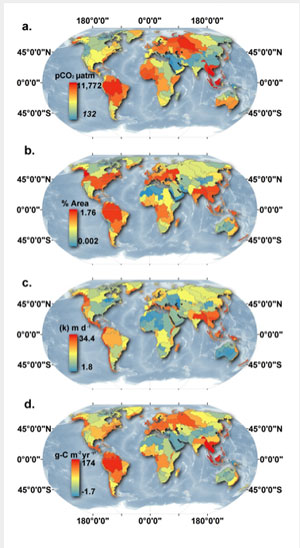 About 70% of the carbon flux from inland waters occurs in just over 20% of the planet’s land surface, including “hotspots” in Southeast Asia, the Amazon, and Central America, where rainfall tends to be greatest. (Image by Peter A. Raymond, et al)

Earlier studies have suggested that CO2 evasion from inland waters might play a critical role in the planet’s carbon cycle, but previous estimates were unsystematic and offered little spatial resolution, researchers said.

Using newly available data about the concentration of CO2 in the planet’s inland waters, the F&ES-led team found that the evasion rate — the rate at which CO2 moves from water into the atmosphere — was highest in tropical “hotspots” where annual rainfall is greatest, including in Southeast Asia, the Amazon, and Central America.

All told, about 70% of the carbon flux from inland waters occurs in just over 20% of the planet’s land surface, Raymond said.

Overall, researchers found that the global CO2 evasion rate from rivers and streams was 1.8 billion tons of carbon per year, compared with 0.32 billion tons annually from lakes and reservoirs.

A critical step was creating the first spatial map of the total area of the planet covered by water, down to the smallest streams and lake, according to the researchers. “We thought, ‘OK, someone must have done this before,’” Raymond said. “But then we started looking and said, ‘Oh, we have to do this.’”

Using newly available datasets, particularly from satellite-based technologies, they calculated that rivers and streams cover about 624,000 square kilometers of the planet’s surface, compared with about 3 million square kilometers for lakes and reservoirs.

The group also compiled the first global dataset of CO2 in inland waters, including calculations from 6,708 stations along the world’s rivers and streams, which was also newly available, largely as result of the ongoing research of co-author Jens Hartmann, a professor of geosciences at the University of Hamburg.

“For 10 years we compiled available data to generate the largest river hydrochemical database to represent CO2 in the water at a global scale,” said Hartmann. “This work shows how new, relevant knowledge could be gained by fusion of globally scattered field data being generated by hundreds of scientists and different agencies.”

Finally, researchers mapped the gas transfer velocity occurring at the different inland waters, a parameter known as “k,” which relates to the rate at which turbulence at the surface of the water drives CO2 evasion.

When these maps were combined, the researchers found that the CO2 evasion rate from lakes and reservoirs was actually lower than some previous estimates, but that the rate from rivers and streams was three times greater. The CO2 contribution was particularly high in smaller streams, where turbulence levels are typically greatest.

“Small streams contribute a large proportion of the CO2 evasion, yet they remain poorly represented by field data,” said David Butman, a co-author and postdoctoral researcher at the Yale School of Forestry & Environmental Studies.

While the findings provide new insights into how rivers and streams affect the global carbon cycle, researchers emphasize that additional research is required to determine the source of CO2 in inland waters and the extent to which human activities contribute to these levels.

“Inland waters are biogeochemical hotspots. They are also a critical global resource,” Raymond said. “A continued effort is needed to map inland waters and understand how they impact global processes such as the carbon budget, species habitat, and production of clean drinking water.”