At the Society for Neuroscience annual meeting in San Diego Nov. 10, 2013, Brown University scientists presented research showing what happens in the brain during sleep to lock in learning of a visually oriented “Where’s Waldo”-like task.

PROVIDENCE, R.I. [Brown University] — As any indignant teacher would scold, students must be awake to learn. But what science is showing with increasing sophistication is how the brain uses sleep for learning as well. At the annual meeting of the Society for Neuroscience in San Diego Nov. 10, 2013, Brown University researchers discussed new research describing the neural mechanism by which the sleeping brain locks in learning of a visual task.

The mounting evidence is that during sleep the brain employs neural oscillations — brainwaves — of particular frequencies to consolidate learning in specific brain regions. In August, Brown scientists reported in the Journal of Neuroscience that two specific frequencies, fast-sigma and delta, that operated in the supplementary motor area of the brain were directly associated with learning a finger-tapping task akin to typing or playing the piano.

The new results show something similar with a visual task in which 15 volunteers were trained to spot a hidden texture amid an obscuring pattern of lines. It’s a bit like an abstracted game of “Where’s Waldo” but such training is not merely an academic exercise, said Takeo Watanabe, professor of cognitive, linguistic, and psychological sciences at Brown.

“Perceptual learning in general has been found to improve the visual ability of patients who have some decline of function due to aging,” Watanabe said. 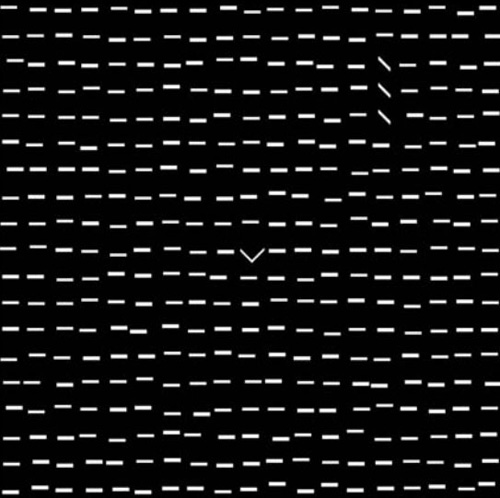 Find the anomalies. Test subjects were asked to find a group of diagonal lines and a caret against an obscuring background of lines. Their sleeping brainwaves before and after the task were compared with their performance of the task. Sleep appeared to help visual learning. Image credit: Watanabe lab/Brown University

In this case the researchers, led by graduate student Ji Won Bang, devised an experiment to see how sleep may help such training take hold. They measured the brainwaves of the participants during sleep before and the training, and they measured the volunteers’ performance on the task before and after.

The researchers saw significant increases in sigma brainwave power after sleep compared to before in the visual cortical area in the occipital lobe of the volunteers’ brains.

To ensure they were measuring activity related to learning the task, the researchers purposely put the stimulus of the discrimination task in a particular quadrant of the subjects’ field of view. That position corresponds to an anatomically distinct part of the visual cortical area. The team saw that the measured gain in sigma wave power was greater specifically in that trained part of the visual cortical area rather than in the untrained parts.

They also saw that the difference of power increase between trained and untrained regions of the visual cortical area was correlated with each individual’s performance improvement on the task.

The results are novel, in large part because the scientists employed a unique blend of measurement technologies including magnetic and electronic encephalography, magnetic resonance imaging and polysomnography to measure the brainwaves in specific brain regions with millimeter and millisecond precision during distinct phases of sleep.

The repeated significance of sigma oscillations, known as sleep spindles, in both the visual task and the motor task may be important in figuring out a broader picture of how the brain consolidates learning during sleep, the researchers said. They did not, however, see the same uptick of delta frequency power that they saw in their study of the motor task.

Neuroscientists believe the two frequency bands play different roles. The sigma frequency is associated with internal workings of a brain region, while delta is associated more with inter-region communication.

“So far we are thinking that the sigma band is used commonly during learning-related jobs, but not necessarily the delta bands,” said Yuka Sasaki, associate professor (research) of cognitive, linguistic, and psychological sciences.

With more to learn, both awake and asleep, their studies continue in their sleep lab at Brown.