Can the president really do that? Two UW law professors give answers in new book

No, no, and not directly, say Lisa Manheim and Kathryn Watts, professors of law at the University of Washington, in a new book.

The answers, of course, are more complicated than a word or two. But every news cycle seems to raise a variation of the same question: Can he do that? 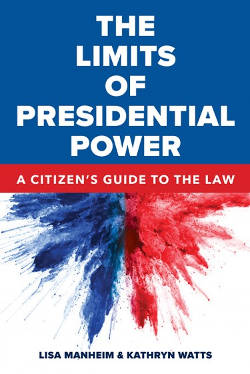 Manheim and Watts, both former U.S. Supreme Court clerks, have now literally written the book on what Trump — or any president — can and cannot do. “The Limits of Presidential Power: A Citizen’s Guide to the Law” is available on Amazon — as the one-year anniversary of Trump’s presidency approaches.

The book emerged from a class Watts and a colleague put together — at the request of students — within weeks of Trump’s election. The feedback they received, along with news coverage of the class, helped to confirm how hungry students, along with members of the public more generally, are for clear and accurate information about the legal basis of presidential power — and how all Americans can take steps to protect the rule of law.

The result was the book, “The Limits of Presidential Power,” which Manheim and Watts believe is the first to provide a concise and accessible guide to the laws that govern the presidency. To help ensure the book remains timely, inexpensive, and readily available, the authors took another unusual step: They decided to bypass traditional publishers and self-publish. It will be available for $2.99 as an ebook and $7.99 in print.

“We hope our guide will provide people with the knowledge they need in order to effectively participate in government, and to protect the rule of law,” said Watts. “Democracies like ours are kept alive by informed citizens.”

From the start, they decided that this project was about providing the public with knowledge —and they concluded that self-publishing would enable them to get the book to readers faster, and cheaper. In fact, a law school class at the University of Arizona — one open to the public as well as to law students — will use it this winter.

At just over 150 pages, “The Limits of Presidential Power” delves, chapter by chapter, into familiar checks (think branches of government) and other important players (the states, the media and the voters). The book also sifts through the president’s “toolkit” and provides a variety of examples, from the first presidency to the 45th, of how the chief executive has wielded his authority, or been hemmed in:

But this isn’t a book about Trump, the authors point out, nor does it take a stand on his presidency — beyond what it demonstrates about the importance of legal limits. Partisanship has little place in these pages.

“As lawyers and law professors, we believe deeply in protecting the rule of law. We started with that point of view, and that’s what guided us,” Watts said. “You don’t see us weighing in on whether a decision on a policy matter is a good thing or a bad thing.”

What they do suggest is civic participation: consuming, and paying for, reliable sources of media; providing input on proposed federal regulations (a straightforward online process, the authors say); and, of course, voting.

“It’s important to vote in every single election. People tend to vote only in elections that are high-profile, but their voting power is greatly reduced if they choose to vote in that selective way,” Manheim said. “State and local officials are constantly making important decisions regarding whether to support or resist the federal government. If voters choose not to vote in state and local elections, those decisions may no longer reflect what those voters want.”

Manheim and Watts believe their book is unique in its approach and target audience; it’s not a traditional textbook or casebook. Rather, it is a guide to the what, why and how of the presidency for all citizens.

“The more people understand how our institutions were designed and what Constitutional protections were built into our government’s framework, the better chance our democracy has of enduring, and the better people are situated to participate in government,” Watts said. “Participation is key to ensuring that our democracy survives. Democracies don’t protect or sustain themselves. They’re sustained by people.”