Developing globalization strategies for American and Chinese companies was the topic of a panel discussion at Yale on March 2. Titled “China and the U.S. — Dual Engines of Global Growth,” the event was hosted by China Economic Forum (CEF), a Yale student organization.

Jeffrey Sonnenfeld, senior associate dean for executive programs and the Lester Crown Professor in the Practice of Management at the Yale School of Management (Yale SOM), delivered opening remarks at the panel discussion, which was moderated by Peter Schott, professor of economics at Yale SOM.

Kleinfeld notedthat success in business depends heavily on mutual understanding and an open and collaborative approach, especially in the case of Sino-U.S. relations today.

Roach said, “The connection between China and the United States is of profound importance to the prosperity of the world from an economic, political, social and geo-political point of view.” According to Roach, former chair of Morgan Stanley Asia, China’s change in growth model could pose a significant challenge for the United States. As China is increasingly relying on labor-intensive growth, rather than a resource-intensive one, the surplus of China’s foreign reserve is likely to decrease in the future, he contended, warning that the benefit of obtaining low-cost capital from China would disappear as a result of this growth model shift. 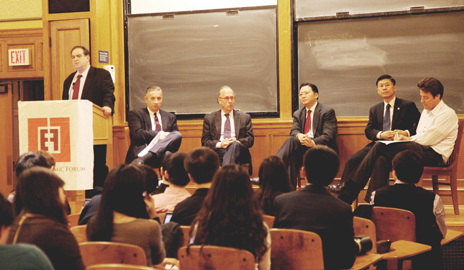 Niu expressed the need for Chinese investors to develop increased understanding of U.S. politics, regulations, media, and government. He noted “Universities like Yale have done a terrific job establishing great programs with universities in China to educate leaders in government and in business.”

“We believe in a promising future for Sino-U.S. relations,” said Yingqi Tan ’14, CEF president. “CEF is a community for individuals who are interested in taking action to learn, inspire, and influence.”