As the hot, humid weather descended on Houston’s Harris County this spring, the county’s mosquito surveillance team geared up for the busiest season in its fight to get ahead of dangerous mosquito-borne illnesses such as Zika.

This year, however, the team had a new weapon in its toolkit: A sleek-looking mosquito trap that experts say marks the biggest innovation in trap technology in decades.

The prototype trap, part of Microsoft’s broader Project Premonition research project, is designed to automatically do things entomologists previously had to do manually or not at all.

For example, this new trap, which is being deployed in the Houston area for the first time this month as part of a pilot project, is designed to only collect the type of mosquito an entomologist wants to track, instead of a hodgepodge of mosquitoes, flies, moths and other critters that scientists then need to manually sort through.

The trap also can tell researchers what time each mosquito was trapped, as well as what the temperature, wind and humidity was when the mosquito flew in. And it’s designed to withstand the rain, wind and other elements that can batter traditional traps and take them out of commission.

“We’ll have a plethora of data we never had before about the behavior of the insects,” said Ethan Jackson, a Microsoft researcher who is leading Project Premonition. 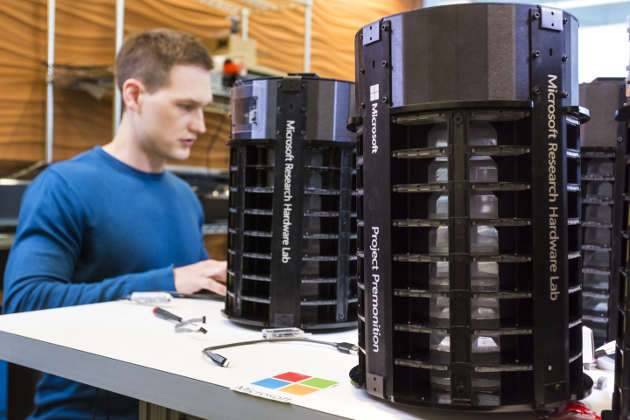 Debboun and his team at Harris County Public Health expect the traps to provide faster, more accurate information about where they can find the mosquitoes that pose the biggest health risk because they could be spreading diseases such as Dengue fever, chikungunya, West Nile virus, St. Louis encephalitis and Zika. That, in turn, will allow the team to target the areas of the vast county that need it most, saving time and money.

“In a county with this size and scope, we don’t have the resources to just cover the county and spray, spray, spray,” said Les Becker, the deputy director and director of operations for Harris County Public Health. “We’ve got to figure out how to do it as efficiently as possible.”

To gather all this information, the traps are using two small, battery-powered microprocessors, which gather data that can then be wirelessly downloaded and sent to the cloud. They’re also relying on the latest advances in a branch of artificial intelligence called machine learning for insights including the ability to differentiate between the mosquitoes they want to trap and the bugs they don’t.

For researchers who have been relying on decades-old traps to track 21st-century disease outbreaks, the trap is a huge leap forward.

“For a scientist this a dream come true,” said Debboun, who contacted Microsoft and asked if Harris County Public Health could be involved after he heard about it last year. “This is something so new, so innovative, so technologically advanced.”

Trying to make a difference

When Jackson and the rest of the research team launched Project Premonition last year, they weren’t planning to immediately start tracking a public health issue like Zika.

Instead, they expected to embark on a five-year research effort aimed at helping officials spot the next big public health concern before it hits major population centers.

“Project Premonition is designed to spot an outbreak like Zika before it really becomes a problem in the clinic,” said Jim Pipas, the Herbert W. and Grace Boyer Chair in Molecular Biology at the University of Pittsburgh and one of the scientists working on Project Premonition. “It’s an early warning system.”

To do that, the researchers plan to first trap mosquitoes — using the new trap – in remote areas outside of big cites. Then, they’ll use the latest advances in molecular biology and machine learning to analyze the contents of those mosquitoes for signs that a new and potentially dangerous disease is starting to appear.

The ability to proactively get a jump on fighting an outbreak like Zika before it becomes a major health threat is a huge advantage over the current system. Right now, public health officials are usually reacting to a disease outbreak only once it is so widespread that doctors are already spotting the harmful effects, such as the devastating birth defects currently linked to Zika.

The project isn’t aimed at curing these types of diseases. Instead, the goal is to stop people from ever getting them by mitigating their spread in the first place.

“This is not going to solve the Zika issue or the Dengue issue or the chikungunya issue,” said Douglas Norris, a professor of molecular microbiology and immunology at Johns Hopkins Bloomberg School of Public Health who is working on the project. “But hopefully what this project will do is enhance our ability to detect them.”

The development of that early warning system is still on track. But when the Zika virus started spreading, the researchers realized that even at this early stage of the project, their research could help with the more immediate public health threat as well.

“Even though we’re not ready to deploy, we’re trying to see if we can make a difference,” Pipas said.

The early versions of the mosquito traps that they are deploying in the Houston area will serve two purposes. They will help entomologists there track mosquitoes that could carry Zika or other harmful diseases right now, while also giving researchers the data they need to start bringing the promise of Project Premonition to life.

The first step is to train the new mosquito traps to do their job better.

The system is designed to recognize which mosquito it is supposed to catch based on the flap of the mosquito’s wing. But to do that it needs what experts call training data: Lots and lots of examples of mosquitoes and other bugs flying into the traps. That’s what they are hoping to collect in Houston.

That data can then be used to build an algorithm that uses machine learning to help the trap learn to correctly identify the mosquito it should be capturing, and to not react when other types of mosquitoes, or completely unrelated insects, try to fly into the trap.

Since each mosquito flies into its own individual box, the new traps also can record what time it flew in and environmental factors such as wind, temperature and humidity that were present at the time. That could help scientists understand the specifics of how a virus is spreading, such as what type of mosquito is infecting people and whether those mosquitoes are more likely to feed at night or when temperatures reach a certain point.

“It collects a lot of data that normally we don’t get,” Norris said. “We can use that to figure out real-world solutions, like that bed nets might work.”

Back in the lab, the researchers also can look more closely at each mosquito to figure out what animal it was feeding on and what viruses it is carrying. The researchers are using the mosquitoes they’ll capture in Houston this summer as training data for the system designed to spot potential disease outbreaks.

Jonathan Carlson, a senior researcher in the Nature and Computing group at Microsoft Research, said the system they are building is similar to the type of system used to classify web pages.

But instead of figuring out which web pages are about baseball versus football, this system is trying to figure out what viruses these mosquitoes are carrying and whether new or worrisome ones are emerging.

The latest advances in both computer science and molecular biology are making it more practical for researchers to cull through the “soup” of mosquitoes and the blood they fed on to figure out what viruses and microbes might be lurking there.

“The vast majority of genomes are unknown,” Carlson said. “We have to figure out, what’s in that soup?”

In addition to building better traps and developing analytics models, the Project Premonition team also is working on ways in which drone technology could be used both for the short-term goal of helping track the spread of Zika and other illnesses, and the long-term goal of mitigating the next disease outbreak.

In the short term, the researchers hope to use drones equipped with computer vision technology to look for areas where mosquitoes that could be carrying diseases are congregating. Using drones instead of people could be another way to save time and money.

In the long term, the researchers hope to use drones to transport and place their new mosquito traps in remote areas – instead of hiking several hours each way to do that manually.

“It will be a revolutionary increase in efficiency,” Pipas said.

Back in Harris County, Becker said public health officials are already looking forward to other, longer-term benefits of Project Premonition.

For example, some scientists have theorized that birds may be playing a role in the sharp increase in West Nile virus in Harris County, but they haven’t had any source of data to really explore that. The ability to figure out what animal a mosquito was feeding on, based on the Project Premonition data, could allow them to look into that research question.

“What the data piece can do is allow us to ask questions that we’ve never been able to ask before,” Becker said.