Four young men who have been paralyzed for years achieved groundbreaking progress — moving their legs — as a result of epidural electrical stimulation of the spinal cord, an international team of life scientists reports today in the medical journal Brain.

The study, conducted by researchers from the University of Louisville, UCLA and the Pavlov Institute of Physiology, was funded in part by the Christopher and Dana Reeve Foundation and the National Institutes of Health.

All four participants were classified as suffering from chronic, motor complete spinal cord injuries and were unable to move their lower extremities prior to the implantation of an epidural stimulator. The stimulator delivers a continuous electrical current to the participants’ lower spinal cords, mimicking signals the brain normally transmits to initiate movement. 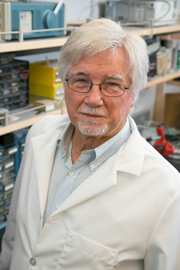 V. Reggie Edgerton in lab. Edgerton is a distinguished professor of integrative biology and physiology, neurobiology, and neurosurgery at UCLA. Image credit: University of California

The research builds on an initial study, published in May 2011 in the journal The Lancet, that evaluated the effects of epidural stimulation in the first participant, Rob Summers of Portland, Ore., who recovered a number of motor functions as a result of the intervention.

Now, three years later, the key findings documented in Brain detail the impact of epidural stimulation in a total four participants, including new tests conducted on Summers. Summers was paralyzed after being struck by a vehicle, and the other three participants were paralyzed in auto or motorcycle accidents.

What is revolutionary, the scientists said, is that the second, third and fourth participants — Kent Stephenson of Mt. Pleasant, Texas; Andrew Meas of Louisville, Ky.; and Dustin Shillcox of Green River, Wyo. — were able to execute voluntary movements immediately following the implantation and activation of the stimulator.

The participants’ results and recovery time were unexpected, which led researchers to speculate that some pathways may be intact post-injury and therefore able to facilitate voluntary movements.

“Two of the four subjects were diagnosed as motor and sensory complete injured with no chance of recovery at all,” said lead author Claudia Angeli, a senior researcher with the Human Locomotor Research Center at Frazier Rehab Institute and an assistant professor at University of Louisville’s Kentucky Spinal Cord Injury Research Center (KSCIRC). “Because of epidural stimulation, they can now voluntarily move their hips, ankles and toes. This is groundbreaking for the entire field and offers a new outlook that the spinal cord, even after a severe injury, has great potential for functional recovery.”

Yury Gerasimenko, professor and director of the laboratory of movement physiology at Russia’s Pavlov Institute in St. Petersburg and a researcher in the UCLA Department of Integrative Biology and Physiology. Image credit: University of California

In epidural stimulation, the electrical current is applied at varying frequencies and intensities to specific locations on the lumbosacral spinal cord, corresponding to the dense neural bundles that largely control the movement of the hips, knees, ankles and toes. With the participants, once the signal was triggered, the spinal cord reengaged its neural network to control and direct muscle movements.

When coupling the intervention with rehabilitative therapy, the impact of epidural stimulation intensified. Over the course of the study, the researchers noted that the participants were able to activate movements with less stimulation, demonstrating the ability of the spinal network to learn and improve nerve functions.

“We have uncovered a fundamentally new intervention strategy that can dramatically affect recovery of voluntary movement in individuals with complete paralysis, even years after injury,” said Susan Harkema, a University of Louisville professor and rehabilitation research director at KSCIRC, Frazier Rehab Institute, director of the Reeve Foundation’s NeuroRecovery Network and primary author of The Lancet article. “The belief that no recovery is possible and complete paralysis is permanent has been challenged.”

Beyond regaining voluntary movement, the research participants have displayed a myriad of improvements in their overall health, including increases in muscle mass and regulation of their blood pressure, as well as reduced fatigue and dramatic improvements to their sense of well-being.

Additionally, all four men were able to bear weight independently, as reported by the team, which also includes UCLA’s V. Reggie Edgerton and Yury Gerasimenko, professor and director of the laboratory of movement physiology at Russia’s Pavlov Institute in St. Petersburg and a researcher in the UCLA Department of Integrative Biology and Physiology.

“This research brings up an amazing number of possibilities for how we can develop interventions that will help people recover movement they have lost,” said Edgerton, a distinguished professor of integrative biology and physiology, neurobiology, and neurosurgery at UCLA and a co-author of the research. “The circuitry in the spinal cord is remarkably resilient. Once you get them up and active, many physiological systems that are intricately connected and that were dormant come back into play.”

The study offers hope that clinical therapies can be developed to advance treatment for the nearly 6 million Americans living with paralysis, including nearly 1.3 million with spinal cord injuries.

The four paralyzed participants ranged in neurological level from C7–T5 and were at least two years post-injury at the time of the intervention. Two of them had been rated “A” on the American Spinal Injury Association’s classification system, meaning they had absolutely no sensation or cognition below the site of their injury; the researchers were highly sceptical that these men would elicit any voluntary movement as a result of the intervention.

However, with the application of epidural stimulation, all four participants recovered voluntary control of their lower extremities, surprising the scientists, who believed at least some of the sensory pathway must be intact for epidural stimulation to be successful.

“With this study, the investigators show that their findings about a motor complete patient regaining movement, as published three years ago in The Lancet, were not an anomaly,” said Susan Howley, executive vice president for research at the Reeve Foundation. “At the present time, other than standard medical care, there are no effective evidence-based treatments for chronic spinal cord injury. However, the implications of this study for the entire field are quite profound, and we can now envision a day when epidural stimulation might be part of a cocktail of therapies used to treat paralysis.”

The research was funded by the Reeve Foundation and the National Institutes of Health (RO1EB007615, P30 GM103507), the Leona M. and Harry B. Helmsley Charitable Trust, the Kessler Foundation, the University of Louisville, the Jewish Hospital and St. Mary’s Foundation, the Frazier Rehab Institute and University Hospital.

“When we first learned that a patient had regained voluntary control as a result of the therapy, we were cautiously optimistic,” said Roderic Pettigrew, director of the National Institute of Biomedical Imaging and Bioengineering, which provided support for the study. “Now that spinal stimulation has been successful in four out of four patients, there is evidence to suggest a large cohort of individuals, previously with little realistic hope of any meaningful recovery from spinal cord injury, may benefit from this intervention.”

“This is a wake-up call for how we see motor complete spinal cord injury,” said Edgerton, who has been conducting fundamental research in this area for 38 years and is a member of the Reeve Foundation’s International Research Consortium on Spinal Cord Injury. “We don’t have to necessarily rely on regrowth of nerves in order to regain function. The fact that we’ve observed this in four out of four people suggests that this is actually a common phenomenon in those diagnosed with complete paralysis.”

The scientists are optimistic that the therapy intervention will continue to result in improved motor functions. In fact, based on observations from the research, there is strong evidence that with continued advancements of the epidural stimulator, individuals with complete spinal cord injuries will be able to bear weight independently, maintain balance and work towards stepping, the scientists said.

For more information on the Reeve Foundation, visit www.christopherreeve.org/epi.

The journal Brain is published by Oxford University Press.

– By Rebecca Laming and Stuart Wolpert