Researchers from North Carolina State University and the University of North Carolina at Chapel Hill have developed an ultrasound device that could help identify arterial plaque that is at high risk of breaking off and causing heart attack or stroke.

At issue is the plaque that builds up in arteries as we age. Some types of plaque are deemed “vulnerable,” meaning that they are more likely to detach from the artery wall and cause heart attack or stroke.

“Existing state-of-the-art technologies are capable of determining if plaque is present in the arteries, but can’t tell whether it’s vulnerable. And that makes it difficult to assess a patient’s risk,” says Dr. Paul Dayton, co-author of a paper on the new device and professor in the joint biomedical engineering department at NC State and Chapel Hill. “Our goal was to develop something that could effectively identify which plaques are vulnerable.”

There are two ultrasound techniques that can help identify vulnerable plaques, but both depend on the use of contrast agents called “microbubbles.” 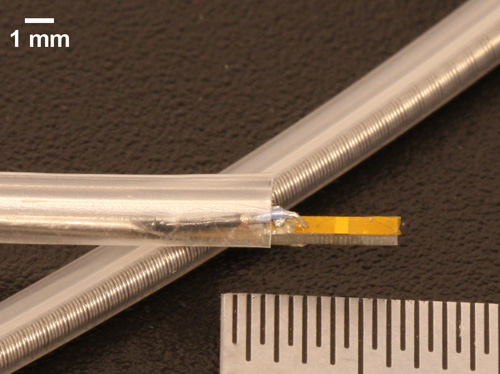 The first technique is to identify “vasa vasorum” in arteries. These are clusters of small blood vessels that often infiltrate arterial plaque, and which are considered indicators that a plaque is vulnerable. When microbubbles are injected into an artery, they follow the flow of the blood. If vasa vasorum are present, the microbubbles will flow through these blood vessels as well, effectively highlighting them on ultrasound images.

The second technique is called molecular imaging, and relies on the use of “targeted” microbubbles. These microbubbles attach themselves to specific molecules that are more likely to be found in vulnerable plaques, making the plaques stand out on ultrasound images.

“The problem is that existing intravascular ultrasound technology does not do a very good job in detecting contrast agents,” says Dr. Xiaoning Jiang, an NC State associate professor of mechanical and aerospace engineering, an adjunct professor of biomedical engineering and co-author of the paper.

“So we’ve developed a dual-frequency intravascular ultrasound transducer which transmits and receives acoustic signals,” Jiang says. “Operating on two frequencies allows us to do everything the existing intravascular ultrasound devices can do, but also makes it much easier for us to detect the contrast agents – or microbubbles – used for molecular imaging and vasa vasorum detection.”

The prototype device has performed well in laboratory testing, but the researchers say they are continuing to optimize the technology. They hope to launch pre-clinical studies in the near future.

The paper, “A preliminary engineering design of intravascular dual-frequency transducers for contrast enhanced acoustic angiography and molecular imaging,” is published in the May issue of IEEE Transactions on Ultrasonics, Ferroelectrics, and Frequency Control. Lead author of the paper is Jianguo Ma, a mechanical engineering Ph.D. student at NC State. The paper was co-authored by Heath Martin, a Ph.D. student in the joint biomedical engineering program.

The research was supported by the National Institutes of Health, under grant 1R01EB015508.