The scandal around the oil spilt into the Gulf of Mexico does not subside. On Thursday, the information was released that U.S. authorities are preparing a lawsuit against the owner of the exploded BP platform, demanding compensation for damage caused by the leakage. Fines can reach $4,300 for each barrel of oil spilt in the waters of the Gulf, i.e., a total of approximately $17.6 billion.

The U.S. government will base its claims on two regulations – the Clean Water Act and Oil Pollution Act, whereby for each barrel of oil spilt in the water the culprit must pay $1,100. In this case, if the U.S. can prove in court that there was a case of gross negligence on BP’s side which caused the accident on the Deepwater Horizon platform, the amount of compensation could rise nearly fourfold, to $4,300, says Forbes. Thus, the total amount of compensation of the British company will amount to approximately $17.6 billion.

However, as noted by the media, the maximum fine amount in the claim will be awarded only if the court finds signs of negligence in actions of BP that gave rise to an emergency situation on the oil platform off the coast of the United States. The final decision on filing the claim is pending.

“Clean Water Act gives the (government) of the US the right to seek compensation for oil spills similar to the leakage on the Deepwater Horizon from various organizations, in the amount of $ 1.1 thousand (and in some cases – up to $4.3 thousand) per barrel of oil spilt in the water,” the court documents state. 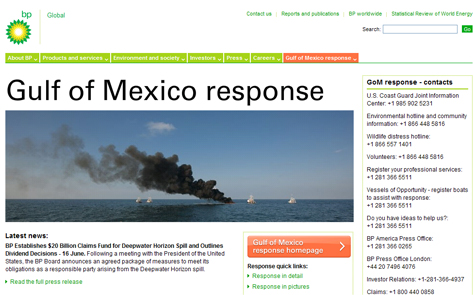 Deepwater Horizon platform operated by BP sank in the Gulf of Mexico off the coast of Louisiana on April 22, after a 36-hour fire, which followed a powerful explosion that claimed the lives of 11 people. The leakage was stopped by BP only in August, thanks to the use of Static kill technology – injection of special heavy drilling fluid and cement in an emergency well.

Nearly 4.9 million barrels of oil was spilt in the waters of the Gulf. At the same time, rescuers managed to collect only approximately 800 thousand of them. Thus, over 4 million barrels are still in the ocean. The bay area was dealt a huge environmental damage. Losses of BP caused by elimination of the effects of leakage, as of early September, amounted to $8 billion.

In addition, the British oil giant at the request of the U. S. government created a special fund in the amount of $20 billion to compensate victims of accidents, both companies and individuals.

The loss of BP for the second quarter of 2010, according to the reporting of US GAAP, totaled $ 17.15 billion against $4.385 billion profit for the same period a year earlier. The loss of BP for six months as a whole amounted to $11.071 billion. Total losses of the company in connection with the leak may be expected to exceed $30 billion.

Meanwhile, BP is trying to share the responsibility for what had happened. Previously, the company laid the blame for the accident in the Gulf of Mexico on Transocean and Halliburton. The first company was the owner of the platform Deepwater Horizon and on the basis of the contract with the British was engaged in drilling for BP. Halliburton, according to the results of the investigation conducted by the British company, was responsible for the special cement barrier at the well, which was intended to keep the hydrocarbons from random leakages.

This incident was the largest oil spill in the U.S., the magnitude of which exceeded the effects of the sinking of the tanker Exxon Valdez off Alaska in 1989. Then, 260 thousand of barrels of oil were spilt from the stranded ship.

The reaction of American authorities and the population to the accident in the Gulf of Mexico was quick. American journalists called the former head of BP, Tony Hayward, the “most hated man. ” People refused to refuel at gas stations owned by the company, and fines from the Government and claims for compensation were filed almost around the clock. As previously mentioned to Bigness.ru by analysts of Kalita-Finans, even if BP is able to fully solve the problem with the accident in the Gulf, “a quiet life in the U.S. is no longer in sight, and every project of the company will be considered by both the authorities and regulators and the public with an extreme bias.

Perhaps now it is really appropriate to leave the large, but extremely unfriendly (to the British company), American market for some time. And it was not so much about the desire of U.S. authorities to eliminate a “non-local” competitor, but has to do with the attitude of the citizens and companies in the U.S., i.e., the end-users, who, when possible, will avoid the product of BP due to the prevailing negative image of the destroyer of American Ecology,” the analysts noted.