NAIROBI, Kenya & ARMONK, N.Y. – 17 Sep 2010: In a move that will accelerate the transformation of African mobile communications and positively impact the speed of economic development across the African continent, Bharti Airtel Limited and IBM (NYSE: IBM) today announced the selection of IBM to manage the computing technology and services that power Bharti Airtel’s mobile communications network spanning 16 African countries.

An agreement is expected to be finalized in the fourth quarter.

Under a completed agreement, IBM will deploy and manage state-of-the-art information technology infrastructure and applications to support Bharti Airtel’s goal of bringing affordable and innovative mobile services to remote locations in Africa.  In addition, IBM will deploy advanced technologies created by IBM Research, including the Spoken Web — a voice-enabled Internet technology that allows users to access and share information simply by talking over an existing telephone. This is particularly compelling for populations with little or no literacy, visual impairments, or which lack access to PCs. 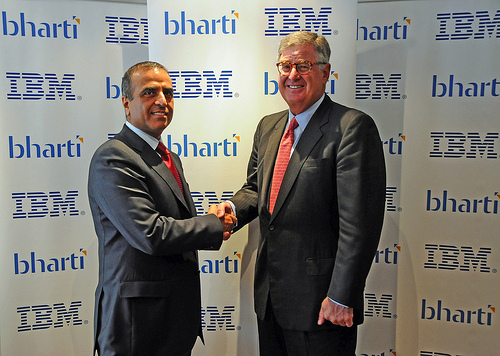 About the image: NEW TECH ERA IN AFRICA — IBM Chairman and CEO Samuel J. Palmisano (right) and Bharti Airtel Chairman and Managing Director Sunil Bharti Mittal participate in a press conference on Friday, September 17 at the Crowne Plaza Hotel in Nairobi, Kenya to announce the selection of IBM to manage Bharti Airtel’s mobile communications network in Africa.  An agreement is expected to be finalized in the fourth quarter of 2010. The move is anticipated to accelerate Africa’s emerging mobile communications market, bringing economic and societal benefits to 16 African countries. Image credit: IBM

When completed, the agreement will extend a deep relationship between IBM and Bharti Airtel that was established in 2004 when South Asia’s leading mobile communications provider tapped IBM to run the IT and applications for its entire Indian network.  Since then, Bharti Airtel has seen explosive growth – from six million subscribers to more than 150 million today.  Bharti Airtel plans to replicate the success of its relationship with IBM by lowering the barrier to entry for the people of Africa to own a mobile device.

According to a Deloitte report commissioned by the mobile communications industry association GSMA, only 40 out of every 100 Africans have a mobile phone.  However, demand is growing at an average rate of 25 percent annually, and a 10 percent rise in mobile penetration could increase gross domestic product  by 1.2 per cent in developing markets.

Sunil Bharti Mittal, Chairman and Managing Director, Bharti Airtel, said:  “There are huge opportunities throughout Africa to transform how people communicate and how communities interact.  Delivering on that opportunity through affordable mobile communications for everyone is our focus.

“We are delighted to extend our successful relationship with IBM in South Asia to Africa.  This transformational business delivery model, which will be a first in Africa’s telecom industry, will bring enhanced efficiencies to our operations and help us deliver world-class mobile services to our customers.

“It will also offer career enhancement opportunities to Bharti Airtel’s employees in the IT domain who will now get exposure to global best practices and latest technologies with IBM.  More importantly, this alliance underlines our commitment to the growth of Africa’s Information and Communication Technology (ICT) sector and contributes towards bridging the digital divide on the continent.”

Samuel J. Palmisano, Chairman, President and Chief Executive Officer, IBM, said:  “We see our strategic relationship with Bharti Airtel as a powerful example of building a smarter planet.  We have achieved great success together in India, and now we are bringing that model to Africa.  By building a 21st century telecommunications infrastructure for the continent – in effect, treating all of Africa as a system of systems – we expect to help spark transformation not just in communications but across all sectors of society – empowering businesses, governments and individual citizens to connect, innovate and achieve economic growth.”

Under the 10-year planned agreement, IBM will consolidate 16 different IT environments across Bharti Airtel’s African operations into an integrated IT system and will oversee the management of all of the applications, data center operations, servers, storage and desktop services.

When the agreement becomes final, IBM will provide customer support applications that include customer relationship management, billing and self-care that will empower customers and assist Bharti Airtel in delivering innovative and convenient 2G and 3G mobile services.  In addition, IBM plans to deploy a powerful content management system to offer rich media content such as music and video over mobile devices, while simultaneously facilitating the growth of the application developer community in Africa.  The strategic partnership will enable Bharti Airtel to scale its network and systems to more than 100 million African customers by 2012.

IBM will also build automated internal systems for Bharti Airtel’s business which will result in enhanced efficiency and empowerment for employees through applications that deliver processes and data on a real time basis – both on PCs and mobile devices.  Business partners such as distributors and retailers will benefit from on demand data by simply using mobile devices to increase efficiencies.  IBM will also be responsible for deploying advanced information security systems that will provide privacy protection for customer data and enhance the resilience of enterprise systems against threats.