Titled “Presidents and Black America: A Documentary History,” the book is designed for everyone from advanced scholars to casual readers of history. 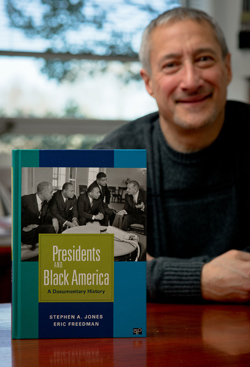 MSU associate journalism professor Eric Freedman is co-author of "Presidents and Black America: A Documentary History." The book uses rarely seen documents to provide new insight on how American presidents have dealt with issues of race. Photo by G.L. Kohuth

It takes the reader from the presidency of George Washington, who raised a few eyebrows in 1776 with his gracious letter to black poet Phillis Wheatley thanking her for the poem she wrote of him, to Barack Obama and his dealings with the rhetoric of the Rev. Jeremiah Wright, and the firing of Shirley Sherrod from her post in the U.S. Department of Agriculture.

“It puts human faces and human situations onto the official ‘This is what President So-and-So did,’” Freedman said. “It reinforces to me that history is more than simply dates and places, formal events and the language used.”

Freedman notes that even though Obama is the nation’s first black president, issues related to race continue at this time.

“That says to me that regardless of the race of the president, race is still a political and cultural issue in the United States,” he said.

One of the more interesting chapters, said Freedman, focuses on the presidency of Thomas Jefferson. Jefferson had conflicting views on slavery, and there is a fair amount of discussion regarding his relationship with his slave/mistress, with whom he fathered several children.

“Whether it was the stage where it was only rumors or when science advanced enough to prove it,” Freedman said, “it played on every white fear, whether it was interbreeding of the master-slave in an unequal relationship both legally and culturally.”

Freedman is a former reporter who won a Pulitzer Prize in 1994 for reporting that disclosed flagrant spending abuses at Michigan’s House Fiscal Agency. Co-author Stephen Jones is a former newspaper editor who is an assistant professor of history at Central Michigan University.