A fungus that kills an estimated 30 percent of the world’s rice crop may finally have met its match, thanks to a research discovery made by scientists at the University of Delaware and the University of California at Davis.

The research, which is funded by the National Science Foundation, is published in BMC Plant Biologyand includes, along with Bais, authors Carla Spence, a doctoral student in the Department of Biological Sciences, Emily Alff, who recently earned her master’s degree in plant and soil sciences, and Nicole Donofrio, associate professor of plant and soil sciences, all from UD; and SundaresanVenkatesan, professor, Cameron Johnson, assistant scientist, and graduate student Cassandra Ramos, all from UC Davis.

“We truly are working to disarm a ‘cereal killer’ and to do so using a natural, organic control,” says Bais, in his laboratory at the Delaware Biotechnology Institute. In addition to rice, a distinct population of the rice blast fungus also now threatens wheat production worldwide.

“Rice blast is a relentless killer, a force to be reckoned with, especially as rice is a staple in the daily diet of more than half the world’s population — that’s over 3 billion people,” Bais notes. “As global population continues to grow, biocontrol bacteria may be an important key for farmers to overcome crop losses due to plant disease and to produce more food from the same acre of land.” 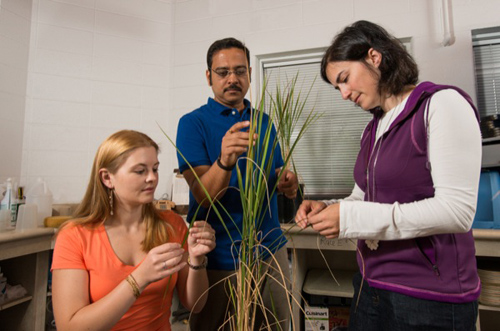 According to Bais, the rice blast fungus (Magnaporthe oryzae) attacks rice plants through spores resembling pressure plugs that penetrate the plant tissue. Once these spores infiltrate the cell wall, the fungus “eats the plant alive,” as Bais says. Common symptoms of rice blast are telltale diamond shaped-lesions on the plant leaves.

In order to do its work, the spore must produce a structure called the appressorium, a filament that adheres to the plant surface like an anchor. Without it, the fungus can’t invade the plant.

In a research study published in the journal Planta this past October, Bais and colleagues Spence, Donofrio and Vidhyavathi Raman showed that Pseudomonas chlororaphis EA105 strongly inhibited the formation of the appressorium and that priming rice plants with EA105 prior to infection by rice blast decreased lesion size.

For her work, Spence, the lead author, recently received the Carson Best Paper Award for the best scientific paper published by a Ph.D. student in biological sciences at UD.

The next step in the research was to sample the rhizosphere, the soil in the region around the roots of rice plants growing in the field, to reveal the microbial community living there and to attempt to elucidate their roles.

Thanks to DNA sequencing techniques, Bais says that identifying the various microorganisms in soil is easy. But understanding the role of each of those microorganisms is a continuing story.

A natural control for a deadly fungus

“Everyone knows what’s there, but we don’t know what they are doing,” Bais says of the microbes. To home in on the source of the antifungal impact, Bais and his colleagues are relying on what he refers to as “old school culturing” to find out if a single bacterium or a group of different bacteria are at work.

In their study reported in BMC Plant Biology, the researchers used gene sequencing techniques to identify 11 naturally occurring bacteria isolated from rice plants grown in the field in California. These bacteria were then tested in the laboratory, with Pseudomonas chlororaphis EA105 demonstrating the strongest impact on rice blast. The soil microbe reduced the formation of the anchor-like appressoria by nearly 90 percent while also inhibiting fungal growth by 76 percent.

Bais points out that although hydrogen cyanide is commonly produced by pseudomonad bacteria, the antifungal impact of Pseudomonas chlororaphis EA105 appears to be independent of cyanide production.

Applying a natural soil microbe as an antifungal treatment versus chemical pesticides offers multiple benefits to farmers and the environment, Bais says.

“Rice blast quickly learns how to get around synthetics — most manmade pesticides are effective only for about three years,” Bais says. “So it’s really cool to find a biological that can attenuate this thing.”

Bais, who also has conducted multiple studies with beneficial microbes in the Bacillus family, envisions a day when farmers will treat plants with a “magic cocktail of microbes” naturally found in soil to help boost their immunity and growth.

This summer, he and his colleagues will conduct field trials using Pseudomonas chlororaphis EA105 on rice plants grown on the UD farm. He also will work with farmers in the central states in India.

The research is supported by a $1.9 million grant from the National Science Foundation’s Plant Genome Research Project.