Biologists Turn Back the Clock to Understand Evolution of Sex Differences

Sex differences account for some of the most of the spectacular traits in nature: the wild colours of male guppies, the plumage of peacocks, tusks on walruses and antlers on moose. Sexual conflict – the battle between males and females over mating – is thought to be a particularly potent force in driving the evolution of traits that differ in males and females.

However, the genetic processes responsible for producing such traits are not well understood, nor how they evolved from their simpler less elaborate ancestral forms. We tend to assume that each tiny step in evolution is an advantage. But are they really?

To investigate, a research team led by Locke Rowe of the Department of Ecology and Evolutionary Biology at the University of Toronto with collaborators Ehab Abouheif of the Biology Department at McGill University, and Abderrahman Khila of University of Toronto and McGill, found a way to recreate those incremental steps, turning back the evolutionary clock and watching the transformation of simple antennae into more elaborate ones. The antennae are used to grasp females during mating interactions, and the researchers were able to measure their increasing utility in this new function as they were increasingly elaborated. The study entitled “Function, developmental genetics, and fitness consequences of a sexually antagonistic trait” is being published in Science May 4. 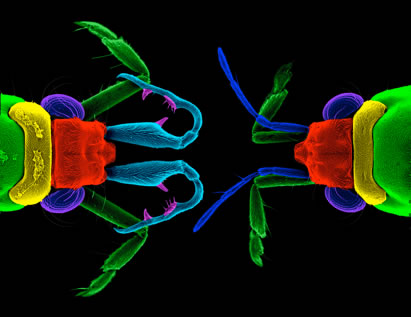 Looking down on the front portion of male (left) and female (right) water striders, Rheumatobates rileyi. Structures that are similar in both sexes (monomorphic) are similarly coloured, while the dimorphic antennae are coloured with different shades of blue in each sex. Grasping structures on male antennae are highlighted in purple. Photo Credit A. Khila

The study looks specifically at water striders, Rheumatobates rileyi, in which the battle of the sexes is evident in the struggles on the water’s surface during mating. Males benefit by mating frequently, females by mating infrequently: both have developed traits to give them the upper hand.

“Over evolutionary time these male and female traits tend to escalate in a manner analogous to an arms race,” says Rowe.

A key difference between the sexes is the male water striders’ antennae, which have evolved from typical sensory devices to large and elaborate grasping devices.

Using high-speed video to observe mating, the researchers noted that each structure – hooks, enlarged segments and spikes – on the antennae appeared precisely designed to grasp females. They then looked at which genes were being expressed during development of the male antennae (just prior to maturation). Knowing the gene provides the opportunity to modify its expression, and therefore modify the male antennae. One gene looked promising so the researchers knocked down its expression during development using RNA interference.

“In this way, we were able to create males with a range of antennae from a simple female-like antennae all the way to the highly elaborate antennae with hooks and other grasping mechanisms of the males we see today,” says Abouheif.

The researchers then tested a set of these males with differing antennae to determine their utility in grasping females. They found that as the antennae became more elaborate, mating success increased. “This means that the struggle over mating could account for the ever increasing elaboration of these antennae,” says Rowe.

The study is unusual in bringing the tools of genetic model systems to a natural system where much is already known about the selective forces involved in shaping the traits under study. It presents one of the rare case studies (another is Darwin’s finches) where a direct linkage has been described between known forces of selection, evolutionary change morphology, and the underlying genetic basis.

The research was funded by the Canada Research Chairs program, the Natural Sciences and Engineering Research Council of Canada and ATIP-Avenir program CNRS, France.