A new assessment of wind energy in India by Lawrence Berkeley National Laboratory has found that the potential for on-shore wind energy deployment is far higher than the official estimates— about 20 times and up to 30 times greater than the current government estimate of 102 gigawatts. This landmark finding may have significant impact on India’s renewable energy strategy as it attempts to cope with a massive and chronic shortage of electricity.

“The main importance of this study, why it’s groundbreaking, is that wind is one of the most cost-effective and mature renewable energy sources commercially available in India, with an installed capacity of 15 GW and rising rapidly,” says Berkeley Lab scientist Amol Phadke, the lead author of the report. “The cost of wind power is now comparable to that from imported coal and natural gas-based plants, and wind can play a significant role in cost effectively addressing energy security and environmental concerns.”

Even if the previously estimated potential of 102 GW is fully developed, wind would provide only about 8 percent of the projected electricity demand in 2022 and 5 percent in 2032. The new Berkeley Lab study has found the total techno-economic wind potential to range from 2,006 GW for 80-meter hub heights (an indication of how high the wind turbine stands above the ground) to 3,121 GW for 120-meter hub heights. Given these new estimates, the availability of wind energy can no longer be considered a constraint for wind to play a major role in India’s electricity future. 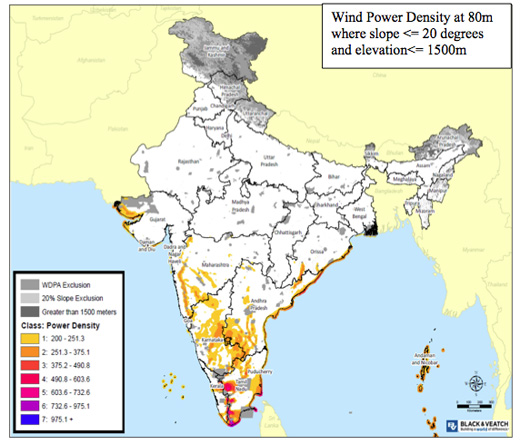 More than 95 percent of the wind potential is concentrated in five states in southern and western India. Image credit: Berkeley Lab

Phadke and his team have been discussing their findings informally and formally with several key government agencies in India and have gotten positive responses. “The key agency in charge, the Ministry of New and Renewable Energy (MNRE), has now signed a Memorandum of Understanding with Berkeley Lab to collaborate on several issues related to potential estimates and wind energy integration,” said Jayant Sathaye, who leads the International Energy Studies Group at Berkeley Lab.

Ranjit Bharvirkar, a senior consultant at Itron Inc. and one of the other authors of the study, said part of the motivation for reassessing India’s wind potential came from recent reassessments of wind potential in the United States and China. Both found substantial increases over the previous assessments—a ten-fold jump in China and a 50 percent increase in capacity in the United States and 400 percent by energy. Improved wind technology, including higher efficiency and hub heights, accounted for much of the increase along with more advanced mapping techniques.

The previous wind potential estimate in India of 102 GW is based on the assumption that only two percent of the windy land is available for wind power development. However, this assumption is not based on any assessment of land availability. The Berkeley Lab study undertook a systematic assessment of the availability of land using publicly available GIS (geographic information system) data on topography and land use and found a significantly higher availability of land that can potentially be used for wind power development, which is the primary reason for the higher potential estimates.

The study excluded land with low-quality wind, slopes greater than 20 degrees, elevation greater than 1,500 meters and certain other unsuitable areas such as forests, bodies of water and cities. The researchers obtained off-the-shelf wind speed data for heights of 80 meters, 100 meters and 120 meters from 3TIER.

The study also finds that the total footprint required to develop high-quality wind energy (that is, wind turbines at 80 meters with a capacity factor greater than 25 percent, which would yield a potential of about 543 GW in India) is approximately 1,629 square kilometers, or 0.05 percent of the total land area in India. The footprint is not large because, typically, only about 3 percent of a wind farm is occupied by the wind turbines and related infrastructure; the rest of the land can be used for other purposes.

The study was funded by the ClimateWorks Foundation through a contract with the Regulatory Assistance Project. Engineers from Itron Inc. and Black and Veatch contributed to the report. “Reassessing Wind Potential Estimates for India: Economic and Policy Implications” can be downloaded at: https://ies.lbl.gov/node/473.