In some parts of the developing world, people may live in homes without electricity or toilets or running water but yet they own cell phones. To charge those phones, they may have to walk for miles to reach a town charging station—and possibly even have to leave their phones overnight. Now a startup company spun off technology developed at Lawrence Berkeley National Laboratory (Berkeley Lab) has created a simple, inexpensive way to provide electricity to the 2.5 billion people in the world who don’t get it reliably.

Point Source Power’s innovative device is based on a solid oxide fuel cell that is powered by burning charcoal, wood or other types of biomass—even cow dung—the types of fuel that many in the developing world use for cooking. The fuel cell sits in the fire and is attached to circuitry in a handle that is charged as the fuel cell heats up to temperatures of 700 to 800 degrees Celsius. The handle, which contains an LED bulb, can then be detached and used for lighting or to charge a phone.

“In the developing world, 2.5 billion people cook with solid fuels every day. We decided to piggyback on that ritual,” said Craig Jacobson, CEO and co-founder of Point Source Power, based in Alameda, California. “Our fuel cell is made from low-cost materials and is very tolerant of contaminants, things like sulfur and carbon, which would kill most other fuel cells.” 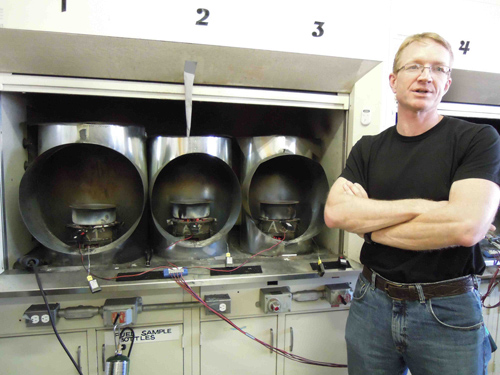 Jacobson co-invented the fuel cell in his 13 years as a materials scientist at Berkeley Lab. Working with Steve Visco and Lutgard DeJonghe, both still affiliated with the Lab, their breakthrough was in finding a way to replace most of the ceramics in the fuel cell with stainless steel, a far cheaper and more durable material.

“Ceramics are typically brittle and relatively expensive to process and assemble into systems,” Jacobson said. “We got rid of 90 percent of the ceramics, keeping only a very thin functional layer, about half the thickness of human hair, to serve as the electrolyte.”

As a result, Point Source Power’s fuel cell is rugged, being able to withstand welding and thermal shock. That makes it cheaper to manufacture. It can also start and stop in a matter of seconds. “Fuel cells have been around for over 50 years—they work great. There are only three problems with fuel cells: cost, cost and cost,” Jacobson said. “Our philosophy is, let’s get rid of those costs and make a fuel cell that can run on anything that burns.”

Jacobson left Berkeley Lab in late 2008 and co-founded Point Source Power with three other Berkeley Lab scientists, two of whom have since left the company. The other co-founder, Mike Tucker, splits his time between the company, where he serves as chief technology officer, and the Lab, where he is a scientist in the Environmental Energy Technologies Division.

“We wanted to make a company that makes a difference,” Jacobson said. “And in markets with off-grid power, they pay a premium for electricity. They will pay per watt-hour what we pay per kilowatt-hour, but they don’t need nearly as much electricity. That was a light bulb that went off.” 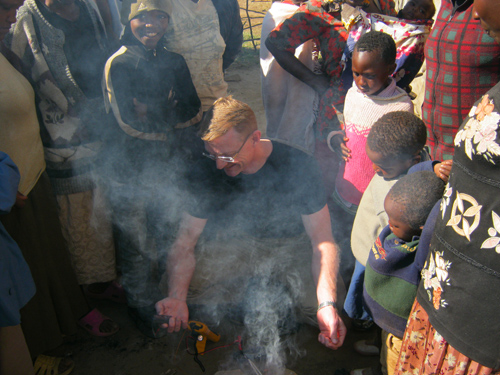 Indeed, the light bulb in Point Source Power’s device, which it calls VOTO, provides longer and better quality light than the kerosene lamps commonly found in the developing world. Moreover it doesn’t emit the unhealthy pollutants and greenhouse gases that kerosene does.

Point Source Power is licensing a portfolio of more than 130 patents from Berkeley Lab. For a year, they worked out of Jacobson’s garage to develop their product and also went to India and Kenya to test the market. In 2010 Khosla Ventures invested in the startup.

The company now has nine employees working in a low-rise building on the old Alameda Naval Air Station. It is starting manufacturing in preparation for commercial release of the VOTO in Kenya this year. Jacobson has been to Kenya a number of times to conduct field trials and obtain input from both users and distributors.

“There’s a lot of enthusiasm,” he said. “They’re fascinated by it. It’s like magic—you put a box in a fire and you get electricity out. People get it and enjoy doing it.” 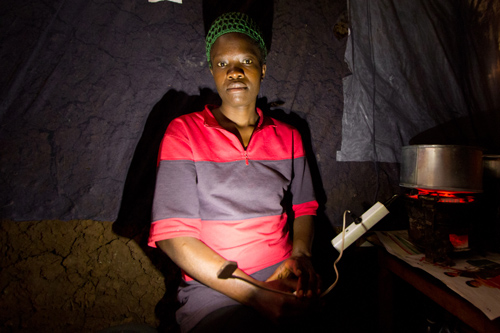 A woman in Kibera, the largest slum in Nairobi, tries out an early version of the VOTO charger. (Kenya photos courtesy of Jacobson)

The handle will retail for about $17 and the fuel cell for about $7. Like all fuel cells, the main limitation is its lifetime—it will last only three to four months with regular use. But given that families spend $8 to $12 a month on kerosene, “within less than two months they’ll get their money back and also get more convenience and save time,” Jacobson said.

Later this year Point Source Power plans to release a version of the VOTO for the U.S. outdoors and camping market, which will also allow charging of rechargeable batteries. Further down the road, Jacobson said the company may go into the backup power market, developing the fuel cell for natural disaster situations or larger scale off-grid systems, such as in agriculture.

“There’s a lot of waste biomass in the world,” he said. “If you can convert that to electricity it’s a good thing.”