Imagine charging your phone as you walk, thanks to a paper-thin generator embedded in the sole of your shoe. This futuristic scenario is now a little closer to reality. Scientists from the U.S. Department of Energy’s Lawrence Berkeley National Laboratory (Berkeley Lab) have developed a way to generate power using harmless viruses that convert mechanical energy into electricity.

The scientists tested their approach by creating a generator that produces enough current to operate a small liquid-crystal display. It works by tapping a finger on a postage stamp-sized electrode coated with specially engineered viruses. The viruses convert the force of the tap into an electric charge.

Their generator is the first to produce electricity by harnessing the piezoelectric properties of a biological material. Piezoelectricity is the accumulation of a charge in a solid in response to mechanical stress.

The first part of the video shows how Berkeley Lab scientists harness the piezoelectric properties of a virus to convert the force of a finger tap into electricity. The second part shows the “viral-electric” generators in action, first by pressing only one of the generators, then by pressing two at the same time, which produces more current. Video by Seung-Wuk Lee’s lab

The milestone could lead to tiny devices that harvest electrical energy from the vibrations of everyday tasks such as shutting a door or climbing stairs.

It also points to a simpler way to make microelectronic devices. That’s because the viruses arrange themselves into an orderly film that enables the generator to work. Self-assembly is a much sought after goal in the finicky world of nanotechnology.

The scientists describe their work in a May 13 advance online publication of the journal Nature Nanotechnology. 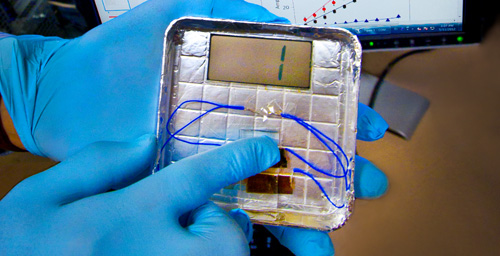 “More research is needed, but our work is a promising first step toward the development of personal power generators, actuators for use in nano-devices, and other devices based on viral electronics,” says Seung-Wuk Lee, a faculty scientist in Berkeley Lab’s Physical Biosciences Division and a UC Berkeley associate professor of bioengineering.

The piezoelectric effect was discovered in 1880 and has since been found in crystals, ceramics, bone, proteins, and DNA. It’s also been put to use. Electric cigarette lighters and scanning probe microscopes couldn’t work without it, to name a few applications.

But the materials used to make piezoelectric devices are toxic and very difficult to work with, which limits the widespread use of the technology. 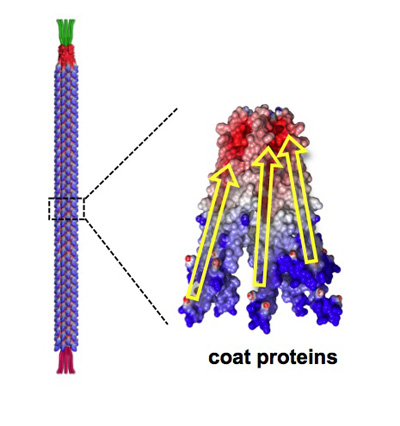 The M13 bacteriophage has a length of 880 nanometers and a diameter of 6.6 nanometers. It’s coated with approximately 2700 charged proteins that enable scientists to use the virus as a piezoelectric nanofiber. Image courtesy of Seung-Wuk Lee's lab

Lee and colleagues wondered if a virus studied in labs worldwide offered a better way. The M13 bacteriophage only attacks bacteria and is benign to people. Being a virus, it replicates itself by the millions within hours, so there’s always a steady supply. It’s easy to genetically engineer. And large numbers of the rod-shaped viruses naturally orient themselves into well-ordered films, much the way that chopsticks align themselves in a box.

These are the traits that scientists look for in a nano building block. But the Berkeley Lab researchers first had to determine if the M13 virus is piezoelectric. Lee turned to Ramesh, an expert in studying the electrical properties of thin films at the nanoscale. They applied an electrical field to a film of M13 viruses and watched what happened using a special microscope. Helical proteins that coat the viruses twisted and turned in response—a sure sign of the piezoelectric effect at work.

Next, the scientists increased the virus’s piezoelectric strength. They used genetic engineering to add four negatively charged amino acid residues to one end of the helical proteins that coat the virus. These residues increase the charge difference between the proteins’ positive and negative ends, which boosts the voltage of the virus.

The scientists further enhanced the system by stacking films composed of single layers of the virus on top of each other. They found that a stack about 20 layers thick exhibited the strongest piezoelectric effect. 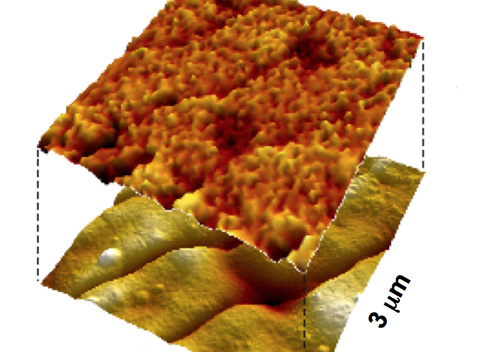 The only thing remaining to do was a demonstration test, so the scientists fabricated a virus-based piezoelectric energy generator. They created the conditions for genetically engineered viruses to spontaneously organize into a multilayered film that measures about one square centimeter. This film was then sandwiched between two gold-plated electrodes, which were connected by wires to a liquid-crystal display.

When pressure is applied to the generator, it produces up to six nanoamperes of current and 400 millivolts of potential. That’s enough current to flash the number “1” on the display, and about a quarter the voltage of a triple A battery.

“We’re now working on ways to improve on this proof-of-principle demonstration,” says Lee. “Because the tools of biotechnology enable large-scale production of genetically modified viruses, piezoelectric materials based on viruses could offer a simple route to novel microelectronics in the future.” 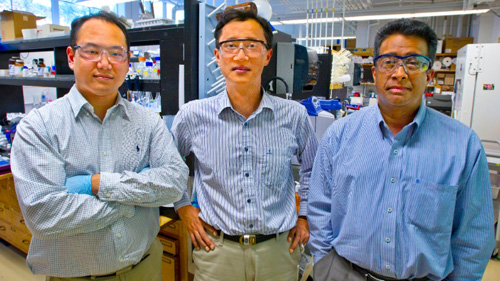