The Information Age will get a major upgrade with the arrival of quantum processors many times faster and more powerful than today’s supercomputers. For the benefits of this new Information Age 2.0 to be fully realized, however, quantum computers will need fast and efficient multi-directional light sources. While quantum technologies remain grist for science fiction, a team of researchers with the U.S. Department of Energy (DOE)’s Lawrence Berkeley National Laboratory (Berkeley Lab) have taken an important step towards efficient light generation, the foundation for future quantum networks.

In a study led by Xiang Zhang, a faculty scientist with Berkeley Lab’s Materials Sciences Division, the research team used a unique optical metamaterial with a refractive index of zero to generate “phase mismatch–free nonlinear light,” meaning the generated light waves move through the material gaining strength in all directions. This phase mismatch-free quality holds promise for quantum computing and networking, and future light sources based on nonlinear optics – the phenomena that occur when interactions with light modify a material’s properties.

“In our demonstration of nonlinear dynamics in an optical metamaterial with zero-index refraction, equal amounts of nonlinearly generated waves are observed in both forward and backward propagation directions,” says Zhang. “The removal of phase matching in nonlinear optical metamaterials may lead to applications such as efficient multidirectional light emissions for novel light sources and the generation of entangled photons for quantum networking.” 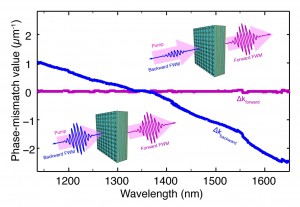 Zhang is the corresponding author of a paper in Science that describes this research. The paper is titled “Phase Mismatch–Free Nonlinear Propagation in Optical Zero-Index Materials.” Co-authors are Haim Suchowski, Kevin O’Brien, Zi Jing Wong, Alessandro Salandrino and Xiaobo Yin.

Zhang, who holds the Ernest S. Kuh Endowed Chair Professor of Mechanical Engineering at the University of California (UC) Berkeley, where he also directs the National Science Foundation’s Nano-scale Science and Engineering Center, is one of the world’s foremost authorities in metamaterials research.

Metamaterials are artificial nanofabricated constructs whose optical properties arise from the physical structure of their superlattices rather than their chemical composition. They’ve garnered a lot of attention in recent years because their unique structure affords electromagnetic properties unattainable in nature. For example, a metamaterial can have a negative index of refraction, the ability to bend light back towards the source, unlike materials found in nature, which always bend light forward away from the source.

In their work with metamaterials, Zhang and his research group have generated the world’s first optical invisibility cloak, mimicked black holes, and created the first plasmonic nanolasers. In this latest study, he and his group focused on the nonlinear properties of metamaterials. 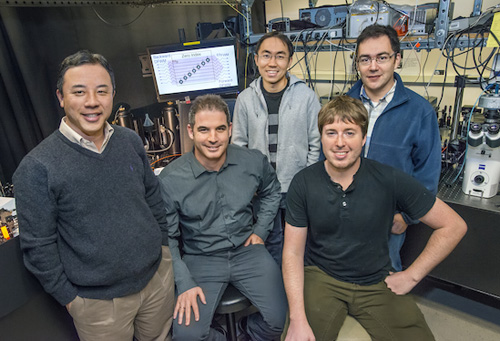 Nonlinear optical processes are always a challenge to achieve and maintain because of the phase-mismatch problem. The interaction of intense laser light with a nonlinear material can generate new light of a different color, but can also lead to the re-absorption of previously generated photons, depending on the relative phase between the two. Different phase velocities lead to destructive interference due to the lack of optical momentum conservation between the photons, known as “phase mismatch” in the jargon of nonlinear optics.

“Phase mismatch is one reason why nonlinear optical processes are not common in everyday life,” says Haim Suchowski, a member of Zhang’s research group who along with Kevin O’Brien was the co-lead author of the Science paper. “In the past 60 years, since the beginning of nonlinear optics, scientists have been developing techniques to compensate this lack of momentum conservation in order to achieve phase matching. However, all of these techniques have limitations and present their own challenges.”

In a zero-index metamaterial, the phases of propagating light waves are mismatch-free in both directions, whereas in a positive/negative index material only the waves propagating in a forward direction are phase mismatch-free. Image courtesy of Zhang group (Click image to enlarge)

Adds O’Brien, “Moreover, all phase mismatch compensation schemes work only in one specific direction, either forward or backward but not both. This restriction arises because the phase-matching process represents a balance between the momenta of the photons involved in the nonlinear interactions, a balance that is disturbed when the momentum of one photon changes sign because of a direction change.”

Previously, it was demonstrated that a metamaterial could be engineered to yield a net refractive index of zero. A beam of light shined through the superlattice of this zero-index metamaterial was unaffected, as if it had passed through a vacuum. The Berkeley researchers surpassed this effort by engineering a zero-index metamaterial that actually generates light through a nonlinear process. This metamaterial features a fishnet structure – a stack of metal-dielectric multilayers with perforated holes. The fishnet consists of 20 alternating layers of gold films 30 nanometers thick and magnesium fluoride films 50 nanometers thick on a 50 nanometer thick silicon nitride membrane.

“We’ve shown that optical momentum conservation in our metamaterial is always preserved regardless of the direction in which the light waves are generated,” Suchowski says. “We call the interactions of light and our metamaterial phase-mismatch free because the nonlinear light emission is equal in all directions.”

The researchers tested their metamaterial using a technique called four-wave mixing, in which three beams of light mix in a non-linear medium to create a fourth. Equal amounts of nonlinearly generated waves were observed in both forward and backward propagation directions.

Explains O’Brien, “In a zero-index material, the photons carry zero momentum and satisfy momentum conservation for any combination of photon directions. This allows the nonlinearly generated waves to coherently build up in both forward and backward directions, which in turn allows for efficient multidirectional emission.”

O’Brien and Suchowski have compared the emission of light waves throughout their zero-index metamaterial to that of positive- and negative-index materials by drawing an analogy with the generation of water waves from rocks dropped in a pond.

“If one drop many rocks into a pond at random, for every wave you generate, you also generate the inverse with a trough where the first had a peak,” Suchowski says. “These waves will destructively interfere with one another so that very few waves are generated no matter how many rocks you drop. If, however, the pond has a zero refractive index, the waves always add up constructively because their phases are all the same. These multiple waves will combine to form a single dramatically stronger wave that propagates in all directions.”

Says O’Brien, “The concept of phase-mismatch free nonlinear interactions provides a new degree of freedom in controlling the nonlinear dynamics in a metamaterial. In addition to entangled photon generation, we could see the realization of other exotic effects such as bi-directional coherent Raman scattering for remote sensing applications.”

This research was supported by DOE Office of Science.