BANGALORE, India — Dec. 3, 2012 — Giri Prasad, a 33-year-old tailor who lives in Delhi, first noticed the pain below his ribs. He went to see a doctor, but when it didn’t subside, he traveled to the hospital where he eventually learned he had tuberculosis.

“There were many problems because first and foremost, I am the bread earner for the family,” he says. “If the bread earner falls ill, it is a real problem for those who are dependent on him. Here in the city the biggest problem is that if one falls sick, there is no other person who will come help.”

The health worker “took my fingerprint on the computer and only then gave me the medicine,” Prasad explains. “In the three days a week I had to go to have my medicine, it did not happen even once that I was unable to go. I always went to get my medicine.”

Microsoft Research India developed the biometric monitoring system in response to one of the most pressing problems in battling tuberculosis — the number of patients who fail to complete their treatment programs and thus develop and spread a deadlier version of the disease. 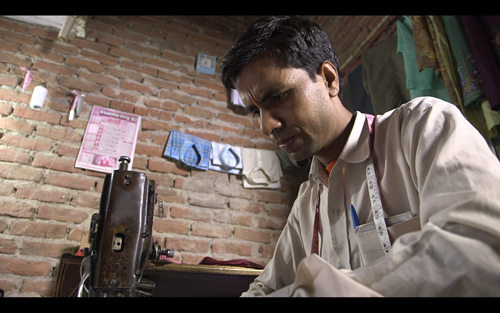 A bacteria that’s spread through the air from person to person, tuberculosis is the second greatest killer worldwide due to a single infectious agent, afflicting nearly 9 million and killing 1.4 million people each year, according to the World Health Organization.

Tuberculosis is treatable and curable through a standard six-month program of four antimicrobial drugs. In India, as in many places throughout the world, these medicines are provided free by the federal government and are administered under direct observation by health workers at clinics around the country. 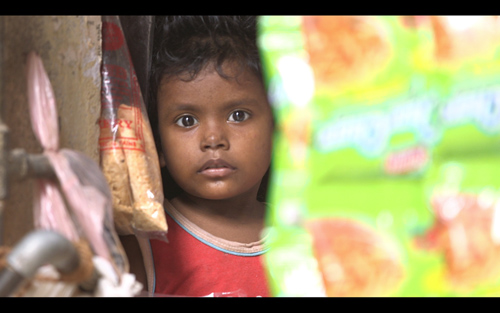 Tuberculosis: The Great Killer. Because the bacteria is spread through the air, everyone is at risk. Tuberculosis is the second greatest killer due to a single infectious agent worldwide, taking 1.4 million lives every year. New Delhi, India, July 2012. Image credit: Microsoft

“The way it works in India and around the world is that it’s so important to finish the course of medication that patients must come to clinics to take the medication under the supervision of health workers,” says Bill Thies, the lead Microsoft researcher working on the project. “It’s called Directly Observed Therapy.”

The problem, however, is that the treatment requires more than 40 visits to a clinic over a six-month period, and many patients — for reasons from busy work schedules to lack of knowledge about the importance of taking the medicine — don’t complete their treatment programs.

“If patients start to feel better — which happens a few weeks after starting the medication — and they’re told they need to take a trip to the center at least once per week for the next six months, there’s an education barrier there,” says Thies. “They say, ‘Why is it important for me to continue taking medication if I don’t have any symptoms?’”

In addition, the social stigma of having tuberculosis can prevent patients from completing their medication programs. “The social stigma against TB is horrifying,” says Dr. Shelly Batra, co-founder of Operation ASHA. “In my country, 100,000 women are thrown out of their families each year because they have contracted tuberculosis. They become destitute, homeless, and they die of disease and starvation on the streets. Three hundred thousand children are thrown out of school every year because they have got TB and nobody wants them. Or they are forced to leave school and become child laborers if a wage-earning parent has got TB.”

Patients who don’t complete the entire six-month antibiotic regimen are at risk of developing multidrug resistant tuberculosis (MDR-TB), which fails to respond to conventional treatment and is difficult and costly to treat. Like standard tuberculosis, drug-resistant tuberculosis is highly contagious. It afflicts 650,000 people worldwide, and the numbers are growing, according to the World Health Organization.

“Drug-resistant TB is going to be the new plague that has the potential to wipe out millions,” says Dr. Batra. 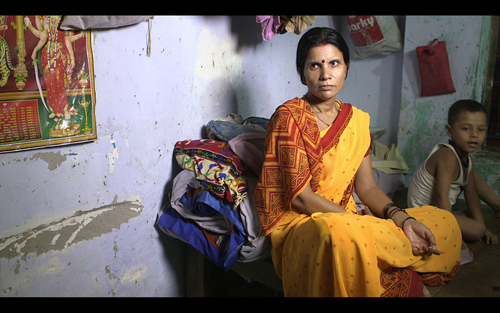 The Risk of Multidrug Resistant Tuberculosis. Patients who don’t complete the entire six-month antibiotic regimen are at risk of developing multidrug resistant tuberculosis (MDR-TB), which fails to respond to conventional treatment and is difficult and costly to treat. Manisha’s mother juggles the challenges of her younger daughter’s illness while caring for the rest of her family. New Delhi, India, July 2012. Image credit: Microsoft

It is exactly these kinds of issues that Microsoft Research India wanted to address when it decided to work together with Operation ASHA, India’s largest non-governmental organization in tuberculosis treatment and prevention.

Thies had started working on technologies for tuberculosis treatment as a graduate student at MIT, and approached Operation ASHA after being hired as a Microsoft researcher in India. “I was working in this space before I joined Microsoft, and we used that as a starting point in our conversations with Operation ASHA,” he says. “They basically described the challenges they faced in making sure patients are taking their medication, and that’s how the project got started.”

Without a biometric system, health workers are required to keep handwritten records, checking off paper-based treatment cards when patients came to the clinic to take their doses. But in the crowded, frenetic atmosphere of clinics around the country, what can happen is that health workers wait until the day the treatment cards are due, check all the boxes, and hand them in.

“From an administration standpoint, if you’re running a treatment program that has 225 centers, how do you ensure quality of care across the centers?” Thies says. “Really there’s no substitute for having an infallible, tamper-proof record.” 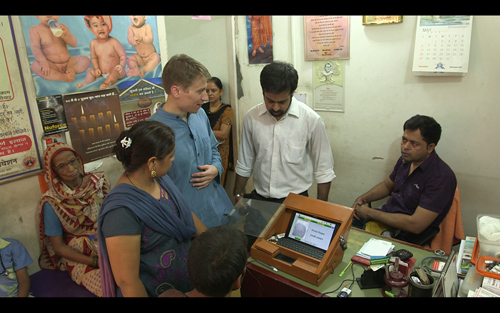 Combatting Tuberculosis through Technology. In an effort to stop the spread of multidrug resistant tuberculosis, Microsoft India Researcher Bill Thies and other researchers in the Technology for Emerging Markets Group developed a system for tracking each patient’s adherence to their treatment program. New Delhi, India, July 2012. Image credit: Microsoft

The two organizations set out to do just that — develop an infallible, tamper-proof system that tracked the medication taken by each patient. By developing such a system, they reasoned, they could help cure more patients of standard tuberculosis while preventing the spread of drug-resistant tuberculosis.

Thies and a small team of researchers tested out various designs. They wanted a system that wouldn’t allow health workers to enter false data, could transfer information across areas India without reliable Internet access, was easy for non-computer users to use, and couldn’t be removed from the clinics.

They eventually decided the answer lies in connecting three devices: a fingerprint reader, a low-cost laptop called a netbook computer, and a GSM modem that allows information to be transmitted in areas without reliable Internet connections.

With those three devices working together, patients who come to the clinic can scan their finger, with an electronic record of their visit logged onto the netbook using software built on the Microsoft .NET platform. Throughout the day, the record of patients visiting each clinic is sent to Operation ASHA’s central office using the GSM modem, allowing workers to track which patients came to each clinic using Microsoft SQL Server database software.

Microsoft Research and Operation ASHA began deploying the system in spring 2010, offering training to help health workers learn the technology. To date, the biometric system has been deployed in more than 40 centers, with more than 60,000 medication doses administered to 3,000 patients.

While researchers have yet to measure the impact on cure rates, interviews with health workers show that the biometric system is encouraging more patients to come to the clinics to complete their course of medication.

“A key benefit is that the patient can never fake having come to the clinic because they actually have to come and provide their fingerprint so the organization knows they were there,” says Thies. “And if someone misses a dose, their supervisor gets an SMS that says, `Today, these patients have missed their doses. You need to follow up in their homes.’”

Thies and his team were worried that health workers would feel threatened by the technology because it checks their work. Interestingly, however, health workers reported that it helped them do a better job. “If a patient doesn’t want to come and gives the excuse of going for duty, I tell them that this is important and that this record goes to the ofﬁce,” one health worker said during the evaluation interview. “This becomes a reason for them to visit the center.”

Operation ASHA eventually plans to make the biometric monitoring system available in all of its 225 centers worldwide. “I believe that biometric technology will go a long way in the prevention of drug-resistant TB,” says Operation ASHA’s Dr. Batra. “Where TB treatment is being done, technology should be used to prevent drug resistance. That is the only way ahead.”

The biometric system also has applications beyond tuberculosis. For example, the technology has been used to monitor whether sex workers in Bangalore are attending support programs to ensure their health and safety. In addition, the Uganda Health Ministry is adapting the technology to monitor doses of anti-viral drugs in the treatment of HIV/AIDS.

“It’s a pervasive problem in tuberculosis that nobody has any reliable account of which patients are taking their medication — it’s almost impossible to get that data,” Thies says. “So when people learn that this is the first data that they can trust, the first data where it’s impossible to trick the technology, they get really excited.”

For his part, Prasad says the toughest thing about having had tuberculosis is being apart from his children — even though he no longer has tuberculosis, he still purposely keeps his distance for fear they will become infected. “I hope no one [else] gets this disease,” he says. “That would be best.”

Acknowledgements: This project would not have been possible without the hard work of Abhishek Sinha, Nupur Bhatnagar, Michal Paik, Navkar Samdaria, Aakar Gupta, Manish Bhardwaj, Sandeep Ahuja, and the incredibly dedicated staff at Operation ASHA.

Donate: If you’d like to help or learn more about Operation ASHA, go to www.opasha.org.

Centers for Disease Control and Prevention, Trends in Tuberculosis, 2011

Reuters, Dangerous TB Spreading at Alarming Rate in Europe – WHO