Dean Starkman, a Pulitzer Prize-winning financial journalist for the Columbia Journalism Review, shared his theories about the 2008 financial crisis with students at a Calhoun College master’s tea on Nov. 29. His talk was sponsored by the Poynter Fellowship in Journalism at Yale.

Starkman, who is currently writing a book on what he regards as the failure of the media to anticipate the financial crisis, explained that he believes the evidence was there, yet no major news sources reported it. “I don’t like the financial press and institutionalized media because they screwed up the pre-crisis coverage, and I don’t like the new media people either — so what do I like?” Starkman joked. 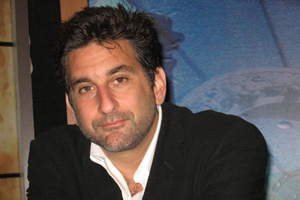 While researching his upcoming book, Starkman discovered a piece that had been published by a Pittsburgh journalist in December 2004 — nearly four years before the crisis itself — warning that a subprime mortgage crisis could happen. That this existed, said Starkman, proved not only that there were warning signs, but that someone in the mainstream media could have, and probably should have, caught them earlier.

“Its very function is to challenge authority and stick up for the little guy. … It doesn’t follow agendas; it helps set them,” he explained. Had there been more of this type of reporting in the years and months before the first financial companies failed, Starkman said, things might have gone differently.

Ultimately, Starkman said he believes that accountability journalism is about informing the people — which, he noted, is what journalism is at its core — and that it is the responsibility of journalists to be accountable to their readers.

“It’s about giving the public a chance, what Richard Hofstadter called the ‘literate citizen,’ to participate in and understand complex problems,” Starkman concluded. “If you’re going to give the public the chance to engage, this practice [of accountability journalism] must be preserved.”