To Paul Tough, his recent visit to the University of Chicago Harris School of Public Policy was “a nice homecoming.”

During the two years of research for his new book, How Children Succeed: Grit, Curiosity and the Hidden Power of Character, Tough spent time at UChicago and in its surrounding neighborhoods.

“The nerve center of my journalistic enterprise was a small dorm room in International House,” he joked Oct. 18 in a speech at Chicago Harris, saying that many of the ideas in the book drew from work in the Department of Economics, the Economics Research Center, the Crime Lab and from the Consortium on Chicago School Research.

In his speech, “The Science of Success,” Tough examined how helping children build character traits like perseverance, curiosity, conscientiousness, optimism and self-control can help them overcome the constraints of poverty and narrow the achievement gap.

“There is a lot of promising and suggestive evidence out there that if we focus on this dimension of non-cognitive skills, or character strengths, especially at these two periods of life—in early childhood and in adolescence—we can have a profound effect on how well kids do, especially kids who are growing up in disadvantage,” said Tough. Building these skills has shown important positive effects, he said, including significantly higher college completion rates. 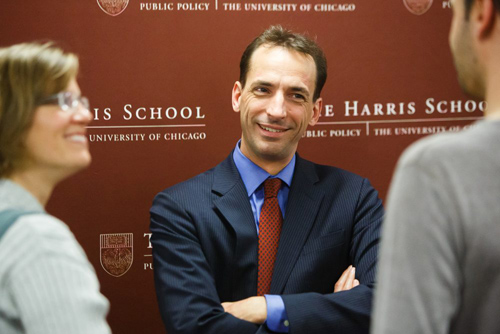 Author Paul Tough spoke Oct. 18 at Chicago Harris, discussing how his research at UChicago helped inform his book on children and their character traits. Photo by Jason Smith

Tough walked the audience through his research process, saying that when he first arrived at UChicago to start researching his book, he had a question—how do children succeed? To get started, he apprenticed himself to Nobel laureate James Heckman, the Henry Schultz Distinguished Service Professor in Economics, and then spent time with many different researchers on campus.

“We are proud that during his time in residence here at Chicago Harris, he was introduced to many of the ideas that he describes in his book, in particular the role of early life events and the importance of non-cognitive skills to childhood development,” said Prof. Ariel Kalil, director of the Center for Human Potential and Public Policy, which promotes research and training on achievement, health and well-being across the lifespan.

The center co-sponsored the Fifth Annual Lecture on Science, Technology & Society, along with the Human Capital and Economic Opportunity Global Working Group, of which Tough is a member.

Tough’s speech was followed by comments from three distinguished Chicago-based panelists on their own efforts to foster non-cognitive skills in children. Joshua Anderson, executive director of Teach for America-Chicago, talked about how Tough’s focus on developing non-cognitive skills resonated deeply with the experience of his TFA teachers. Diana Rauner, president of the Ounce of Prevention Fund, described her organization’s Home Visiting Program work to create secure attachments between the parent and child, something Tough identifies as critical to the ability to succeed. And Jonathan Guryan, a professor of human development and social policy at Northwestern University, spoke about his research examining how cognitive behavioral therapy can reduce relapses in delinquency in the juvenile justice system. They agreed that more research is needed on how to best foster these important non-cognitive skills.

Armed with that information, “we could not only change the lives of children, the outcomes for whole families, but we could change the situation in whole neighborhoods in Chicago and around the country,” Tough concluded.