Astronomers have witnessed for the first time a spiral galaxy in the early universe, billions of years before many other spiral galaxies formed. In findings reported July 19 in the journal Nature, the astronomers said they discovered it while using the Hubble Space Telescope to take pictures of about 300 very distant galaxies in the early universe and to study their properties. This distant spiral galaxy is being observed as it existed roughly three billion years after the Big Bang, and light from this part of the universe has been traveling to Earth for about 10.7 billion years.

“As you go back in time to the early universe, galaxies look really strange, clumpy and irregular, not symmetric,” said Alice Shapley, a UCLA associate professor of physics and astronomy, and co-author of the study. “The vast majority of old galaxies look like train wrecks. Our first thought was, why is this one so different, and so beautiful?”

Galaxies in today’s universe divide into various types, including spiral galaxies like our own Milky Way, which are rotating disks of stars and gas in which new stars form, and elliptical galaxies, which include older, redder stars moving in random directions. The mix of galaxy structures in the early universe is quite different, with a much greater diversity and larger fraction of irregular galaxies, Shapley said.

“The fact that this galaxy exists is astounding,” said David Law, lead author of the study and Dunlap Institute postdoctoral fellow at the University of Toronto’s Dunlap Institute for Astronomy & Astrophysics. “Current wisdom holds that such ‘grand-design’ spiral galaxies simply didn’t exist at such an early time in the history of the universe.” A ‘grand design’ galaxy has prominent, well-formed spiral arms.

The galaxy, which goes by the not very glamorous name of BX442, is quite large compared with other galaxies from this early time in the universe; only about 30 of the galaxies that Law and Shapley analyzed are as massive as this galaxy. 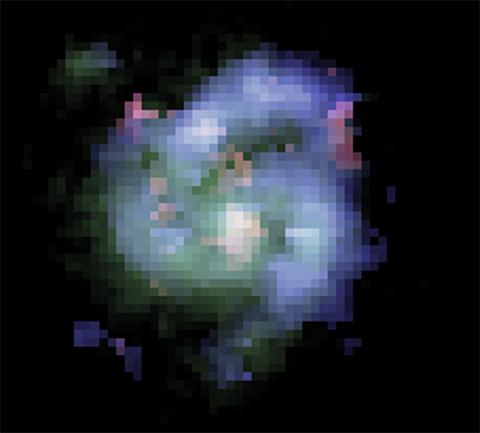 To gain deeper insight into their unique image of BX442, Law and Shapley went to the W.M. Keck Observatory atop Hawaii’s dormant Mauna Kea volcano and used a unique state-of-the-science instrument called the OSIRIS spectrograph, which was built by James Larkin, a UCLA professor of physics and astronomy. They studied spectra from some 3,600 locations in and around BX442, which provided valuable information that enabled them to determine that it actually is a rotating spiral galaxy — and not, for example, two galaxies that happened to line up in the image.

“We first thought this could just be an illusion, and that perhaps we were being led astray by the picture,” Shapley said. “What we found when we took the spectral image of this galaxy is that the spiral arms do belong to this galaxy. It wasn’t an illusion. We were blown away.” Law and Shapley also see some evidence of an enormous black hole at the center of the galaxy, which may play a role in the evolution of BX442.

Why does BX442 look like galaxies that are so common today but were so rare back then?

Law and Shapley think the answer may have to do with a companion dwarf galaxy, which the OSIRIS spectrograph reveals as a blob in the upper left portion of the image, and the gravitational interaction between them. Support for this idea is provided by a numerical simulation conducted by Charlotte Christensen, a postdoctoral scholar at the University of Arizona and a co-author of the research in Nature. Eventually the small galaxy is likely to merge into BX442, Shapley said.

Law, a former Hubble postdoctoral fellow at UCLA, and Shapley will continue to study BX442. 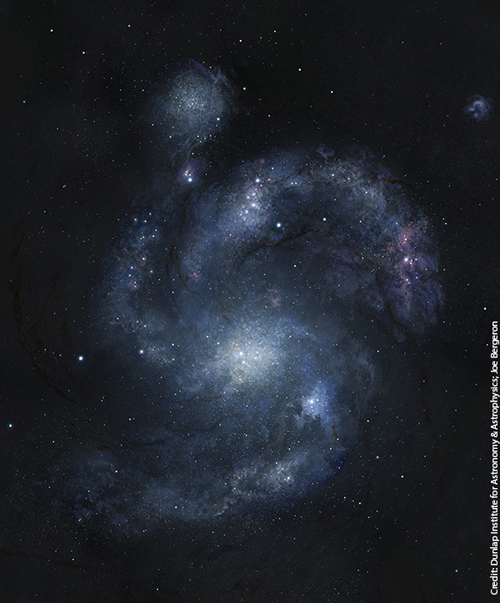 “We want to take pictures of this galaxy at other wavelengths,” Shapley said. “That will tell us what type of stars are in every location in the galaxy. We want to map the mixture of stars and gas in BX442.”

Shapley said that BX442 represents a link between early galaxies that are much more turbulent and the rotating spiral galaxies that we see around us. “Indeed, this galaxy may highlight the importance of merger interactions at any cosmic epoch in creating grand design spiral structure,” she said.

Shapley’s research is funded by the David and Lucile Packard Foundation.