The 168 rectangular panels on the roof of the Katherine Moran Coleman Aquatic Center will generate  enough power to keep the lights on and enough thermal energy to heat the million-gallon pool. The center, due to open April 13, will be Rhode Island’s first hybrid (heat and power) solar installation — also the largest in the nation and the first on a college campus.

Brown is diving into solar energy.

The University is installing an array of solar panels on its new aquatics center that will be the first combined solar-powered electrical and heating system in Rhode Island and the largest installation of its kind in the United States. Earlier this week, technicians bolted down the last of the 168 rectangular-shaped panels on the Katherine Moran Coleman Aquatics Center’s roof. The center is expected to open for students on April 13. When it does, the solar panels will generate enough power — 160,944 total watts — to keep the lights on and enough thermal energy to heat the center’s million-gallon pool. 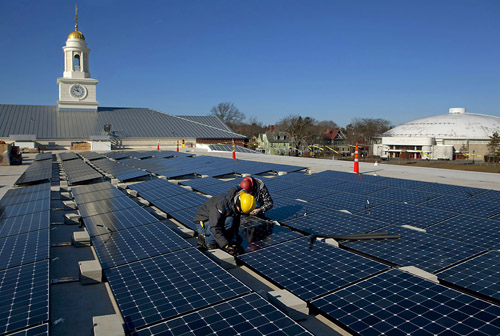 More heat and light. The 168 hybrid solar panels installed on the roof of the new aquatics center provide both electricity for the building and heat for the pool. It is the largest hybrid solar installation in the country and the first on a college campus. Image credit: Mike Cohea/Brown University

“This system is a great demonstration project of how renewable energy can be utilized in a city environment and provides a living lab for students,” said Chris Powell, director of sustainable energy and environmental initiatives at Brown.

Lined up in 21 rows that take up the majority of the roof, the panels are outfitted with photovoltaic cells that produce electricity from sunlight. Each panel is tilted at a shade under 10 degrees to optimize resistance to natural forces and to lighten the panels’ collective weight. Underneath the photovoltaic strip is a membrane that siphons the heat generated by the sunlight to heat up glycol, a fluid that is channeled to a source, which, in turn, heats the pool. Collecting and using the heat also cools the panels, improving each panel’s electrical output by 6 percent, an additional 18 watts.

“In the meantime, you’re also collecting over 650 watts of thermal energy,” said Michael Intrieri, founder and chief executive officer of SunDrum Solar, a firm based in Hudson, Mass., that designs the hybrid panels for residential and commercial markets.

That thermal energy will keep the pool water more than comfortable in the summer and will “preheat” the water to about 60 degrees Fahrenheit in the winter, said Tim Moore, supervising electrician for Sunlight Solar Energy, Inc., who oversaw the panels’ installation at the aquatics center.

Currently, the largest hybrid solar panel array is on the Thomas P. “Tip” O’Neill Jr. Federal Building in Boston. When operational, the $800,000 Brown system not only will be the largest hybrid installation in the nation, but also the first of its kind on a college campus, Intrieri said.