ANN ARBOR — The aftermath of Hurricane Sandy, which ripped through southern Haiti in October, will extend beyond destruction and injury. The current and future food security looks bleak barring significant intervention during the next year, according to a University of Michigan report.

Rain-triggered mudslides throughout the country from the hurricane has not only washed out homes, but also roadways and bridges—bringing transportation to a near standstill, says Athena Kolbe, the report’s lead author and a U-M doctoral candidate in social work and political science. The natural disaster compounded Haiti’s long struggles to transport enough produce from the countryside to village markets and major urban centers. 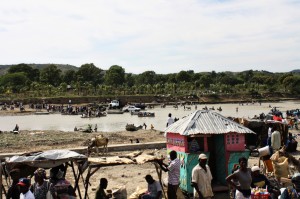 With many households surveyed lacking seeds, cuttings and tubers needed to grow food during the upcoming season, Kolbe expects a bleak outlook.

“It is likely that the country will be forced to import more expensive food from abroad to meet the needs of the local population,” she said.

The latest report—”After the Storm: Haiti’s Coming Food Crisis”—is among a series about happenings in Haiti. Previous reports have focused on how residents have been affected by violent crime.

Agriculture, Kolbe says, is the backbone of Haiti’s economy, with more than three million farming families in the country. Since other forms of economic efforts, such as manufacturing, haven’t been a priority, natural disasters can negatively impact Haiti’s population—exposing it to food insecurity.

Using data collected from nearly 1,500 household surveyed in October and November, some of the key findings include:

The report’s researchers noted that breastfeeding women were among the storm survivors who reported a lack of sufficient food to meet their daily needs. Nearly 80 percent of them said they couldn’t produce enough milk for their babies during the week after the storm.

Haiti leaders, international donors and community groups must respond proactively with plans and interventions before widespread hunger affects more cities, Kolbe says. For example, financial assistance for farmers, as well as direct aid in the form of seeds and fertilizer, can make a difference toward recovery efforts.

“A coordinated and effective response is possible,” she said.