Both techniques were born out of the discovery that underground nuclear explosions leave their mark—on the outer reaches of Earth’s atmosphere.

Now, working with astronomers at the U.S. Naval Research Laboratory (NRL), they have analyzed historical data from the Very Large Array (VLA), a constellation of 27 radio telescopes near Socorro, New Mexico—and discovered that the VLA recorded a very similar pattern of disturbances during the last two American underground nuclear tests, which took place in Nevada in 1992.

Dorota Grejner-Brzezinska, professor of geodetic and geoinformation engineering at Ohio State, said that the new findings help support the notion that GPS systems—and their technological successors, global navigation satellite systems (GNSS)—are viable tools for detecting clandestine nuclear tests around the globe. She added that now is a good time to begin developing the concept. 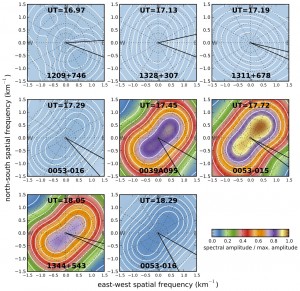 A shockwave from an underground nuclear test disturbs the ionosphere over the Very Large Array. Image by Joseph Helmboldt, Naval Research Laboratory.

“With a global availability of permanently tracking GPS networks now extending to GNSS, tremendous amounts of information are becoming available, and the infrastructure is growing,” she said. “We have a great opportunity to develop these ideas, and make a tool that will aid the global community.”

Grejner-Brzezinska presented the findings in a press conference at the American Geophysical Union (AGU) meeting on Dec. 4 with study co-authors Jihye Park, a postdoctoral researcher in geodetic and geoinformation engineering at Ohio State, and Joseph Helmboldt, a radio astronomer at NRL. Park presented the research in a lecture at AGU on Dec. 3.

While radio telescopes don’t cover the entire globe as GPS systems do, Helmboldt said that the two technologies complement each other, with telescopes offering higher-resolution measurements over a smaller area.

“The observations we make as radio astronomers are not so different from GPS,” he said. “We may be looking up at a distant galaxy instead of down to the Earth, but either way, we’re all looking at radio waves traveling through the ionosphere.”

The ionosphere is the outermost layer of the atmosphere, which begins approximately 50 miles above the Earth’s surface. It contains charged particles that can interfere with radio waves and cause measurement errors in GPS and radio telescopes.

For that reason, both radio astronomers and geodetic scientists routinely monitor the ionosphere in order to detect these errors and compensate for them.

“We’re talking about taking the error patterns—basically, the stuff we usually try to get rid of—and making something useful out of it,” Grejner-Brzezinska said.

Park, who developed this analysis method to earn her doctoral degree at Ohio State, cited key similarities and differences between the GPS data from the 2009 North Korean nuclear test and the VLA data from the 1992 American tests: one on Sept. 18 named Hunters Trophy, and the other on Sept. 23, named Divider.

The North Korean bomb is believed to have had a yield of about five kilotons. According to the GPS data, the wave front of atmospheric disturbance spread outward from the test site in the village of P’unggye at approximately 540 miles per hour. It reached 11 GPS stations in South Korea, China, Japan, and Russia in that first hour. In contrast, Hunters Trophy and Divider each had yields of 20 kilotons. Each blast created a wave front that quickly covered the 700 miles from the Nevada Test Site to the VLA, with a top speed of approximately 1,500 miles per hour.

“Clearly, the U.S. explosions were much bigger than the North Korean explosion,” Park said. “The wave fronts traveled faster, and the amplitudes were higher. There are still details missing from the North Korean test, but we can learn a lot by comparing the two events.”

Park will continue this work while she takes a new position at the University of Nottingham starting in January. She’s already found that GPS stations in the North Pacific recorded ionospheric disturbances during the deadly Japanese earthquake of 2011, and she will focus on how to differentiate between earthquake signals and nuclear test signals.

Collaborators on this work include Ralph R. von Frese, professor in the School of Earth Sciences at Ohio State; Yu “Jade” Morton, professor in electrical engineering at Miami University in Oxford, Ohio; and Thomas Wilson, an astronomer at NRL.