After a Three-Decade Hiatus, Sea-Level Rise May Return to the West Coast

WASHINGTON — The West Coast of North America has caught a break that has left sea level in the eastern North Pacific Ocean steady during the last few decades, but there is evidence that a change in wind patterns may be occurring that could cause coastal sea-level rise to accelerate beginning this decade.

That is the conclusion of a new study that says that conditions dominated by cold surface waters along the West Coast could soon flip to an opposite state.

“There are indications that this is what might be happening right now,” says Peter Bromirski, a researcher at Scripps Institution of Oceanography, UC San Diego, and lead author of a study now in press in the Journal of Geophysical Research–Oceans, a journal of the American Geophysical Union.

Global sea level rose during the 20th Century at a rate of about two millimeters (0.08 inches) per year. That rate increased by 50 percent during the 1990s to a global rate of three millimeters (0.12 inches) per year, an uptick frequently linked to global warming. Rising sea level has consequences for coastal development, beach erosion and wetlands inundation. Higher sea levels could cause increased damage to coastal communities and beaches, especially during coincident high tides, storm surges and extreme wave conditions. 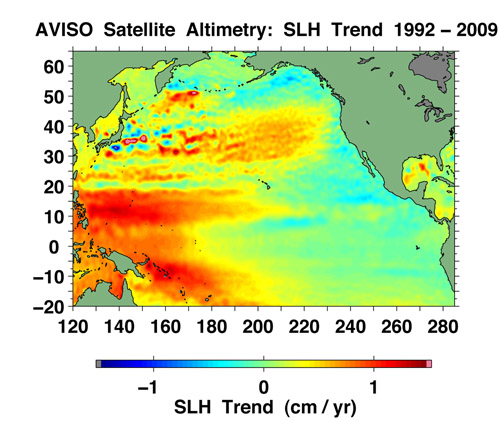 Satellite altimetry sea-level height estimates over an 18-year period show upward trends in the western Pacific Ocean that are much larger than the global rise rate, but virtually no rise off the West Coast. Image credit: American Geophysical Union

Scientists date the current phase of a Pacific Ocean climate cycle called the Pacific Decadal Oscillation (PDO) to the mid- to late-1970s. The current “warm” phase is characterized by the upward movement, or upwelling, of cold water toward the surface along the West Coast. Despite a few El Niño-induced surges in sea level during that time, the coastal sea level trend has mostly been steady.

When the cycle shifts to its negative “cold” phase, coastal ocean waters will become characterized more by a downwelling regime, where the amount of colder, denser water currently brought to the surface will be reduced. Resulting warmer surface water will raise sea level. 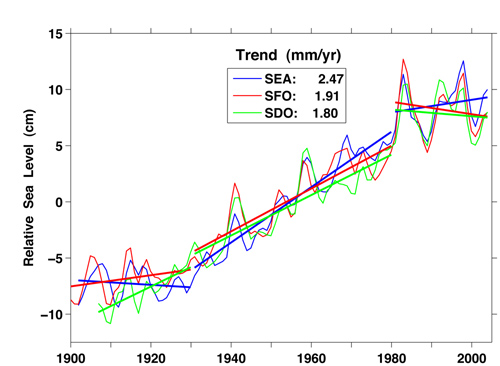 Tide gauge data at Seattle, San Francisco and San Diego show sea level along the Pacific coast rising at about the global rate from 1930 to about 1980, but scant rise or even a lowering of sea level over the past three decades that is consistent with altimetry. Image credit: American Geophysical Union

The authors write that the characteristics of wind stress variability over the eastern North Pacific “recently reached levels not observed since before the mid-1970s regime shift. This change in wind stress patterns may be foreshadowing a PDO regime shift, causing an associated persistent change …that will result in a concomitant resumption of sea level rise along the U.S. West Coast to global or even higher rates.”

Several state and federal agencies, led by the California Department of Boating and Waterways, funded the study. Support also came from NOAA, the National Science Foundation, and the California Energy Commission.