Valèse Mapto Kengne obtained her diploma last spring from the Université de Montréal Faculty of Education where she devoted her thesis to answering that very question. “I wanted to know the truth behind the numbers. Why do some girls drop out? And contrarily, what drives the others to persevere? 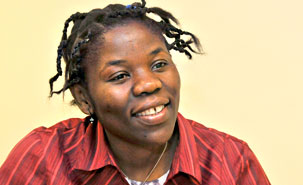 Quebec has been a real laboratory for me, says Valèse Mapto Kengne. I learned a lot, ranging from the struggles of women to the benefits of the Parent Report. Image credit: University of Montreal

She traveled part of the African continent, particularly Cameroon and Togo, to hear the stories of women who persevered until university. Many of which were heartbreaking. “Imagine a slew of talented women who are without a support network, without financial resources, trapped in forced marriages and oftentimes mothers of one or many children and you can’t help them in any way. It’s heartbreaking,” says a tearful Kengne.

The researcher knows something about it. She personally lived through painful moments prior to coming to Quebec. “My thesis was very therapeutic,” says Kengne. “I understood my personal struggle through the stories of these women.”

The fighters, the assisted and the heirs

Kengne categorized the women into three groups: the fighters, the assisted and the heirs. All of their journeys were different, but they all shared an extraordinary resilience.

“Women are still reduced to sexual objects which obstructs their education,” says Kengne. “For them, school is an instrument with which they can free themselves from various forms of domination, particularly male domination and sexist stereotypes, and attain a certain autonomy.” The situation is so problematic that one participant admitted: “I disguised myself as a boy seeing as they all did better in school.”

The fighter’s journey is defined by sacrifice and suffering. They often come from rural areas where schools aren’t readily accessible, their parents are poorly educated and many are single mothers. Many were forced to marry young while others lost their parents and were adopted by family or friends. “They find all sorts of ways to make it out,” says Kengne. “They work as housecleaners or live with people to take care of their kids.”

The assisted live through similar struggles but find refuge with friends and family who provide them with moral and financial support.

The heirs are particularly fortunate as they come from a family that supports their development. Therefore, they have greater confidence in their future than many of their peers. Most of them live in urban areas near schools.

Kengne highlights the importance of educated parents. “If the mothers aren’t educated, the girls aren’t likely to be. When considering the education of children, one must also consider the literacy of parents to help them emerge from poverty and help them better protect their children from abuse and many of the early pitfalls.”

The fighters, the assisted and the heirs are all exposed to the sexual harassment of male teachers who dominate the profession. “I had a teacher who followed me until the end of high school and who kept promising the world if I succumbed to his advances,” said a student. This forces many girls to change schools or even dropout.

According to Kengne , schools still aren’t an environment of liberty and equality. “The proof is that there is still a group of fighters.”

Schools must reach out to children and not the opposite. “If not, they are abandoned from the get-go,” says Kengne. The future of Africa depends on it. “The quality of life and human dignity to which many developing countries aspire will not be realized without the equitable schooling of their youth.”

Kengne will soon return to Cameroon. She would like to teach at the university and share the knowledge she acquired here. “Quebec has been a real laboratory for me. I learned a lot, ranging from the struggles of women to the benefits of the Parent Report. It helped me understand that it is possible for developing countries to build institutions promoting universal values. That is why I believe Africa needs me…and why I need Africa.