Diamonds, Silver and the Quest for Single Photons

Building on earlier work, scientists and engineers recently developed a manufacturing process that allows them to craft an assortment of miniature, silver-plated-diamond posts that enable greater control of light producing photons at the atomic scale. The research could prove important for future generations of quantum computers. 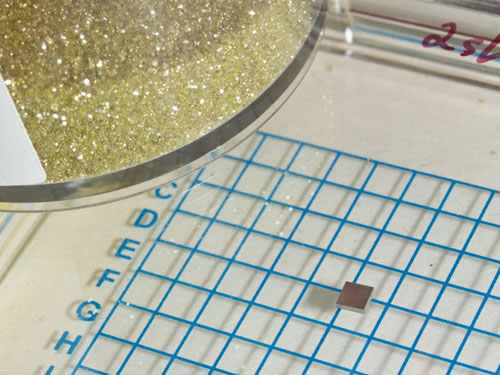 Imperfections (known as color centers) in the diamond can give the crystals a characteristic color. Nitrogen in these tiny diamonds (top) turns them yellow. The two chips at the bottom consist of diamond layered on silver. Image credit: Eliza Grinnell / Harvard SEAS

The development supports efforts to create robust, room-temperature quantum computers by setting the stage for diamond-based microchips. Additionally, the technology could support new tools capable of measuring magnetic fields at the nanometer scale.

Appearing online in the Oct. 9, 2011 edition of Nature Photonics, the research was led by electrical engineer Marko Loncar of Harvard University, his postdoctoral researcher and his students.

“Luminescent imperfections in diamond, and nitrogen-vacancy color centers in particular, have recently emerged as a promising building block for realization of scalable, on-chip, quantum networks and sensitive magnetometers, owing to excellent ‘memory’ in a nitrogen vacancy’s spin,” says Loncar. 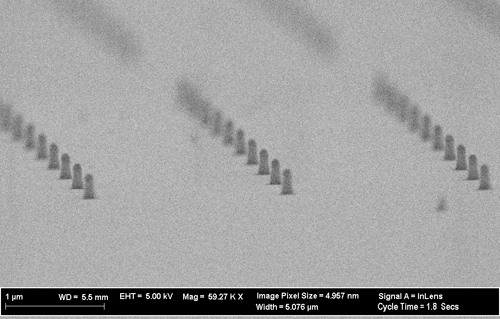 SEM image of the diamond nanoposts. Each one is approximately 100nm wide and 200nm tall. A nanometer is a billionth of a meter. Image credit: Jennifer Choy, Harvard University

The researchers implanted pure diamond crystals with nitrogen (which yields the necessary imperfections to enable diamonds to emit photons), etched arrays of parallel posts approximately 180 nanometers tall and 100 nanometers in diameter into the crystals, and coated the posts with a thin layer of silver. The fabrication procedure results in tens of thousands of devices for each iteration of the manufacturing process.

“Color centers in diamond arise from defects or atomic impurities in the crystal lattice, resulting in the luminescence we see in some bulk diamond crystals,” adds co-author Jennifer Choy of Loncar’s laboratory. “Certain color centers, including the nitrogen-vacancy center used in this work, are quantum emitters that release single photons, which are coupled to electronic (and nuclear) spin states and can be used to encode, store, communicate and finally read-out information. Single photon emission in such systems is generally robust even at room temperature, which makes diamond-based devices enticing for the creation of an on-chip quantum network.” 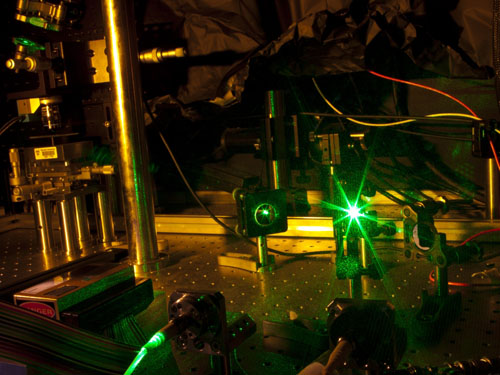 By studying both bare and coated diamond, the researchers recorded variations in photon emission that appear to be dependent upon not just the material coating, but also the size of each post. The resulting data suggest how various configurations could yield emitters tuned for specific purposes, such as high-speed computing, advanced imaging and secure communications.

The emitters in the new devices are implanted close to the diamond surface and possess electron spins with orientations that affect the fluorescence intensity of the emitter. Because the electron spins are sensitive to the ambient electromagnetic field environment, they have potential as sensitive, magnetic-field sensors, allowing researchers to collect information by monitoring the photon count rate.

“Demonstrating control over the rate at which photons are released is a challenging and important step towards utilizing these color centers in quantum information processing protocols, since it allows for information to be encoded and read-out more efficiently,” adds Choy. “The diamond-silver device leads to rate enhancements in many emitters over the entire diamond chip in parallel and provides an efficient way to manipulate photon production rates on a large scale. “While much research remains before diamond can yield devices such as quantum computer chips or nanometer-scale magnetometers, the recent study provides engineers and scientists with a clearer understanding of fundamental photonics behavior that could potentially guide such technology.

For more on NSF-supported research in Massachusetts, navigate the interactive map at NSF’s SEE Innovation website.