Washington, D.C.— Around 250 million years ago, at the end of the Permian period, there was a mass extinction so severe that it remains the most traumatic known species die-off in Earth’s history. Some researchers have suggested that this extinction was triggered by contemporaneous volcanic eruptions in Siberia. New results from a team including Director of Carnegie’s Department of Terrestrial Magnetism Linda Elkins-Tanton show that the atmospheric effects of these eruptions could have been devastating. Their work is published in Geology.

The mass extinction included the sudden loss of more than 90 percent of marine species and more than 70 percent of terrestrial species and set the stage for the rise of the dinosaurs. The fossil record suggests that ecological diversity did not fully recover until several million years after the main pulse of the extinction. 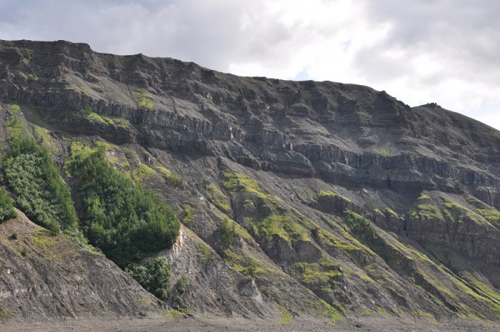 This photo taken along Kotuy River in Arctic Siberia shows the base of the Siberian Traps volcanic sequence. Photo courtesy of MIT’s Benjamin Black.

Their results indicate that volcanic releases of both carbon dioxide (CO2) and sulfur dioxide (SO2) could have created highly acidic rain, potentially leaching the soil of nutrients and damaging plants and other vulnerable terrestrial organisms. Releases of halogen-bearing compounds such as methyl chloride could also have resulted in global ozone collapse.

The volcanic activity was likely episodic, producing pulses of acid rain and ozone depletion. The team concluded that the resulting drastic fluctuations in pH and ultraviolet radiation, combined with an overall temperature increase from greenhouse gas emissions, could have contributed to the end-Permian mass extinction on land. 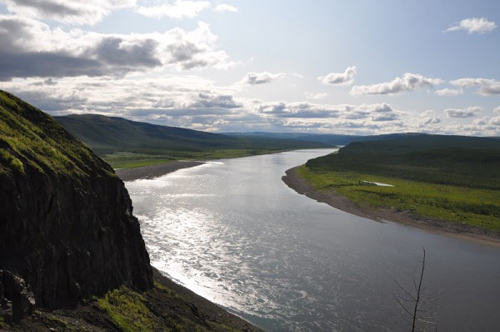 Photo of the Kotuy River in Arctic Sibera, where the base of the Siberian Traps vocanic sequence is shown. Photo courtesy of MIT’s Benjamin Black