A Tailored Pair of Genes

*For ancient plants, two genes were definitely better than one*

In the wake of the disaster that killed the dinosaurs, the ancestors of today’s crop plants reinvented themselves.

They doubled their genomes, and in that single act set the stage for feeding the world 60 million years later.

In a study published in the Nov. 16 issue of the journal Nature, researchers from the University of Minnesota and other institutions recount how sequencing the genome of a model, alfalfa-like legume revealed the monumental benefits that flowed when the ancestor of legumes acquired an extra copy of every gene. 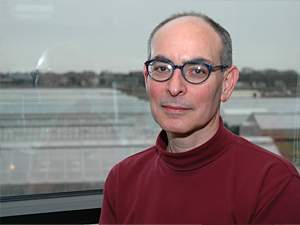 Researcher Nevin Young led a crack team of 124 scientists in deciphering an important piece of the genetic history of legumes. Image credit: University of Minnesota

The findings may help researchers genetically engineer legumes to do a better job of meeting the world’s rising demand for nitrogen, the backbone of all protein and a major nutrient in fertilizers.

Legumes supply nitrogen through a partnership (called symbiosis, Latin for “living together”) with bacteria that live in the roots of the plants and turn inert nitrogen from the air into a biologically usable form. The process is called nitrogen fixation.

“Legume symbiosis with nitrogen-fixing bacteria is the largest source of natural, nonsynthetic nitrogen fertilizer in agriculture,” says first author Nevin Young, a plant pathology professor at the University of Minnesota. “Understanding and leveraging symbiosis is the only possible way anybody can think of to expand the amount of natural fertilizer that gets into crops. The discovery [of genome duplication’s role] is important in understanding how that symbiosis works.”

To visualize that role, think of genes as jobs. Suppose one person is handling two jobs; he or she may well be mediocre at both. But if you could duplicate the person, you would get two people who could specialize and thus do each job better. That’s what most plants, including the common ancestor of legumes, did with their genes nearly 60 million years ago.

How the genes doubled isn’t known, but Young says it could have arisen from a mating where both “eggs” and “sperm” retained full-sized genomes.

Using the legume Medicago truncatula as the model, the researchers studied the fates of two genes in the ancestral plant, starting with the doubling of those (and all other) genes several million years after an asteroid struck Earth. That famous catastrophe occurred 65 million years ago, ending the Cretaceous Period and leading to the demise of the dinosaurs.

Both of the ancestral genes had performed dual functions. One was to help nitrogen-fixing bacteria infect the roots of the legume and enter into symbiosis with the plant. In this arrangement, the bacteria supply the plant with nitrogen so it can make protein, and in return, the plant supplies the bacteria with energy. 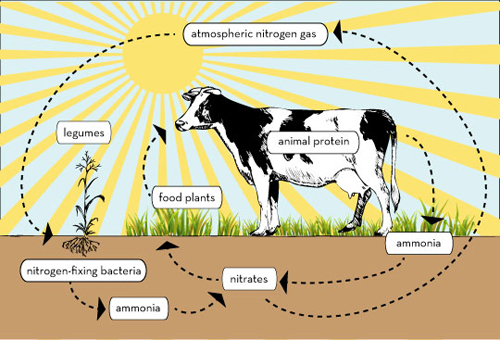 This simplified graphic shows how nitrogen-fixing bacteria in the roots of legumes perform the crucial first step in turning nitrogen in the air into nourishment for food plants and animals. Image credit: University of Minnesota

The ancestral genes’ second function was to help the plant’s roots interact with soil fungi that supply the plant with minerals, notably phosphorus, which the plant could not wrest from the soil by itself.

With the genome doubling, each ancestral gene now came in two copies. The researchers found that each copy evolved a different specialty: one involved with the plant’s interactions with nitrogen-fixing bacteria, the other governing its relations with soil fungi. Both functions improved, and the ancestral legume evolved into many species, including top performers like soybeans, peas, beans, and peanuts, which supply most of the protein consumed by humans.

Because of the similarity between the two plants, “everything we discover about Medicago is directly applicable to alfalfa,” a major forage crop, Young says. The work will help scientists help legumes produce more nitrogen and phosphorus fertilizer.

“There are a lot of problems with fertilizers in water, and we spend a lot of money on synthetic fertilizer,” says Young. “To keep agriculture sustainable, plants and people who grow plants will have to do a better job utilizing naturally occurring nutrients like nitrogen and phosphorus. [Besides legumes] the only way to make fertilizer is through mining or [fossil-fuel-intensive] factories.

“Plants can only do it with help from bacteria and fungi, and the discovery we made is important in understanding how that works.”

Major U.S. funding for the research was provided by the National Science Foundation and the Noble Foundation.