A Scarcity of Women Leads Men to Spend More, Save Less

MINNEAPOLIS / ST. PAUL — The perception that women are scarce leads men to become impulsive, save less, and increase borrowing, according to new research from the University of Minnesota’s Carlson School of Management.

“What we see in other animals is that when females are scarce, males become more competitive. They compete more for access to mates,” says Vladas Griskevicius, an assistant professor of marketing at the Carlson School and lead author of the study. “How do humans compete for access to mates? What you find across cultures is that men often do it through money, through status and through products.” 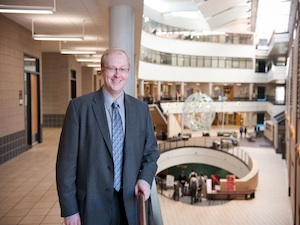 To test their theory that the sex ratio affects economic decisions, the researchers had participants read news articles that described their local population as having more men or more women. They were then asked to indicate how much money they would save each month from a paycheck, as well as how much they would borrow with credit cards for immediate expenditures. When led to believe women were scarce, the savings rates for men decreased by 42 percent. Men were also willing to borrow 84 percent more money each month.

In another study, participants saw photo arrays of men and women that had more men, more women, or were neutral. After looking at the photographs, participants were asked to choose between receiving some money tomorrow or a larger amount in a month. When women were scarce in the photos, men were much more likely to take an immediate $20 rather than wait for $30 in a month.

According to Griskevicius, participants were unaware that sex ratios were having any effect on their behavior. Merely seeing more men than women automatically led men to simply be more impulsive and want to save less while borrowing more to spend on immediate purchases.

“Economics tells us that humans make decisions by carefully thinking through our choices; that we’re not like animals,” he says. “It turns out we have a lot in common with other animals. Some of our behaviors are much more reflexive and subconscious. We see that there are more men than women in our environment and it automatically changes our desires, our behaviors, and our entire psychology.”

“The Financial Consequences of Too Many Men: Sex Ratio Effects on Savings, Borrowing, and Spending” will be published this month in the Journal of Personality and Social Psychology. Co-authors of the study include Joshua Tybur (VU University Amsterdam), Joshua M. Ackerman (M.I.T.), Andrew Delton and Theresa Robertson (University of California, Santa Barbara), and Andrew E. White (Arizona State University).

While sex ratios do not influence the financial choices women make, they do shape women’s expectations of how men should spend their money when courting. After reading a news article informing women that there are more men than women, women expected men to spend more on dinner dates, Valentine’s gifts, and engagement rings.

“When there’s a scarcity of women, women felt men should go out of their way to court them,” adds Griskevicius.

In a male-biased environment, men also expected they would need to spend more in their mating efforts.

In addition to conducting laboratory experiments, the researchers reviewed archival data and calculated the sex ratios of more than 120 U.S. cities. Consistent with their hypothesis, communities with an abundance of single men showed greater ownership of credit cards and had higher debt levels.

Research Implications for Marketers and Society

Whereas previous research has found that merely seeing an attractive woman in advertising would make a man more aggressive or make a man more interested in conspicuously consuming, “The Financial Consequences of Too Many Men” study suggests it may not be that simple. According to the findings, whether a woman is alone or surrounded by many or few men can have a great impact on the reaction it elicits.

Griskevicius says the effects of sex ratios go beyond marketing and influence all sorts of behavior. He cites other studies showing the strong correlation between male-biased sex ratios and aggressive behavior.

“We’re just scratching the tip of the iceberg when it comes to financial behavior,” says Griskevicius. “One of the troubling implications of sex ratios for the world in general is that it’s about more than just money. It’s about violence and survival.”

About the Carlson School of Management

Established in 1919 and based in the Twin Cities of Minneapolis and St. Paul, the Carlson School of Management at the University of Minnesota is a recognized leader in business education and research. Its focus on experiential learning, international education and maintaining strong ties to the business community exemplify the school’s commitment to excellence. More information about the school can be found at www.carlsonschool.umn.edu.