Vanadium dioxide is poised to join the pantheon of superstars in the materials world. Already prized for its extraordinary ability to change size, shape and physical identity, vanadium dioxide can now add muscle power to its attributes. A team of researchers with the U.S. Department of Energy (DOE)’s Lawrence Berkeley National Laboratory (Berkeley Lab) has demonstrated a micro-sized robotic torsional muscle/motor made from vanadium dioxide that for its size is a thousand times more powerful than a human muscle, able to catapult objects 50 times heavier than itself over a distance five times its length within 60 milliseconds –  faster than the blink of an eye.

“We’ve created a micro-bimorph dual coil that functions as a powerful torsional muscle, driven thermally or electro-thermally by the phase transition of vanadium dioxide,” says the leader of this work, Junqiao Wu, a physicist who holds joint appointments with Berkeley Lab’s Materials Sciences Division and the University of California-Berkeley’s Department of Materials Science and Engineering. “Using a simple design and inorganic materials, we achieve superior performance in power density and speed over the motors and actuators now used in integrated micro-systems.”

Vanadium Dioxide Micro-Muscle. This movie shows a vanadium dioxide-based micro-muscle functioning first in micro-catapult mode, throwing out an object, and then in micro-explosion mode, whereby it senses a proximate object and reacts by pushing the object away. (Movie courtesy of Junqiao Wu group, Berkeley Lab/UC Berkeley) 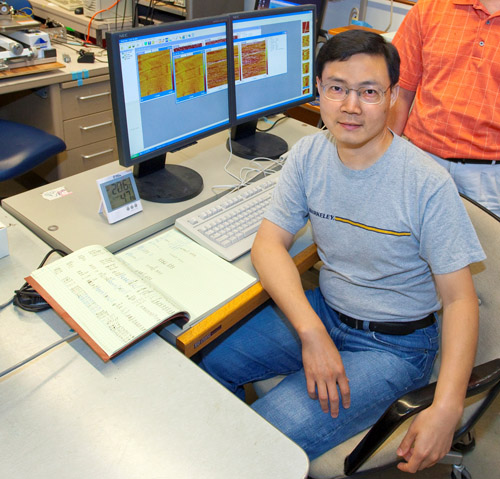 What makes vanadium dioxide highly coveted by the electronics industry is that it is one of the few known materials that’s an insulator at low temperatures but abruptly becomes a conductor at 67 degrees Celsius. This temperature-driven phase transition from insulator-to-metal is expected to one day yield faster, more energy efficient electronic and optical devices. However, vanadium dioxide crystals also undergo a temperature-driven structural phase transition whereby when warmed they rapidly contract along one dimension while expanding along the other two. This makes vanadium dioxide an ideal candidate material for creating miniaturized, multi-functional motors and artificial muscles.

“Miniaturizing rotary motors is important for integrated micro-systems and has been intensively pursued over the past decades,” Wu says. “The power density of our micro-muscle in combination with its multi-functionality distinguishes it from all current macro- or micro-torsional actuators/motors.”

Wu and his colleagues fabricated their micro-muscle on a silicon substrate from a long “V-shaped” bimorph ribbon comprised of chromium and vanadium dioxide. When the V-shaped ribbon is released from the substrate it forms a helix consisting of a dual coil that is connected at either end to chromium electrode pads. Heating the dual coil actuates it, turning it into either a micro-catapult, in which an object held in the coil is hurled when the coil is actuated, or a proximity sensor, in which the remote sensing of an object (meaning without touching it) causes a “micro-explosion,” a rapid change in the micro-muscle’s resistance and shape that pushes the object away.

“Multiple micro-muscles can be assembled into a micro-robotic system that simulates an active neuromuscular system,” Wu says.  “The naturally combined functions of proximity sensing and torsional motion allow the device to remotely detect a target and respond by reconfiguring itself to a different shape. This simulates living bodies where neurons sense and deliver stimuli to the muscles and the muscles provide motion.”

The vanadium dioxide micro-muscles demonstrated reversible  torsional motion over one million cycles with no degradation. They also showed a rotational speed of up to approximately 200,000 rpm, amplitude of 500 to 2,000 degrees per millimeters in length, and an energy power density up to approximately 39 kilowatts/kilogram.

“These metrics are all orders of magnitudes higher than existing torsional motors based on electrostatics, magnetics, carbon nanotubes or piezoelectrics,” Wu says.

The heating of the vanadium dioxide micro-muscle to actuate it can be done either globally with a tiny heating pad, or with an electrical current applied to the dual coil. Wu says heating with the electric current is the better way to go because it allows for the selective heating of individual micro-muscles and the heating and cooling process is much faster. In addition, as vanadium dioxide absorbs light and coverts it into heat, the coil can also be triggered optothermally.

“With its combination of power and multi-functionality, our micro-muscle shows great potential for applications that require a high level of functionality integration in a small space,” Wu says.

This work was supported by a DOE Office of Science Early Career Award to the University of California, Berkeley.

For more about the research of Junqiao Wu go here