Mating and meiosis – the specialized cell division that reduces the number of chromosomes in a cell – are related, but in most yeasts they are regulated separately. Not so in Candida lusitaniae, where the two programs work in unison, according to a new study in Nature. Comparison with other species suggests that this fusion may support C. lusitaniae’s “haploid lifestyle” of maintaining only one set of chromosomes in each cell.

PROVIDENCE, R.I. [Brown University] — From a biological point of view, the world’s most exotic sex lives may be the ones lived by fungi. As a kingdom, they are full of surprises, and a new one reported in the journal Nature seems sure to titillate the intellects of those who study the evolution of mating and ploidy, the complement of chromosomes in each cell.

Fungal fecundity is a seemingly anything goes world. Individual yeasts reserve the option of either sexual or asexual reproduction. Biologists remain puzzled about why, but different species predominantly maintain cells containing one (haploidy), two (diploidy), or three or more (polyploidy) versions of their chromosomes. Contrast that with the humdrum reproduction of animals who are locked into an unwavering program of sex and two versions of chromosomes in most cell types, except eggs, sperm and some others. Scientists look to yeasts to study the true variety of reproduction in the natural world.

“Fungi, in terms of sexual reproduction, are on the outer limits with what they can do, when they do it, and how they do it,” said study corresponding author Richard Bennett, associate professor in Brown University’s Department of Molecular Microbiology and Immunology. “There is a lot of super interesting biology in studying fungal sex. They keep surprising us.”

In a study Bennett’s lab published online in October in the journal Eukaryotic Cell, for example, a team led by undergraduate Riyad Seervai found that when Candida tropicalis mates, it turns diploid cells into tetraploid cells. But then it uses a mechanism other than meiosis to reduce the chromosome complement back to that of a diploid. This work was highlighted in print earlier this month. 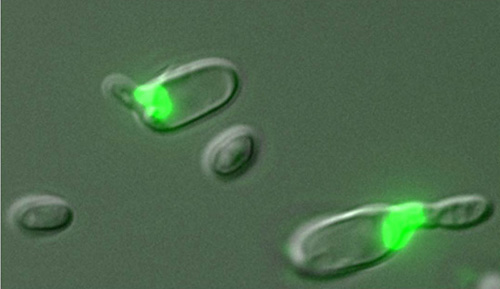 In the new study in Nature, Bennett’s team, including lead authors Christine Scaduto and Raquel Kim Sherwood (now at Yale), focused on the infectious species Candida lusitaniae, which unlike many Candida species happens to prefer a haploid “lifestyle.” The scientists compared how its gene expression regulates mating and meiosis — the process of producing haploid cells from diploid cells – to that of a related diploid yeast, Saccharomyces cerevisiae, a.k.a. brewer’s yeast.

Previous studies had shown that the brewer’s yeast regulates meiosis and mating independently. The genes relevant to each process are transcribed and expressed when their specific process is underway. What the researchers discovered in C. lusitaniae, however, is that the yeast expressed genes associated with meiosis and mating during both processes. Their mating and meiosis programs were essentially fused.

It appeared as if sometime during its own evolution, C. lusitaniae had completely rewired its reproductive program compared to its “cousin” brewer’s yeast. If that were without precedent, perhaps it could just be written off as an oddity, but there is another haploid yeast that has also evolved such a fused program: Schizosaccharomyces pombe. But S. pombe and C. lusitaniae are very distant relatives. Their evolution diverged at least 330 million years ago.

That two such distantly related haploid yeasts should each have evolved a fused program of mating and meiosis makes it seem more likely that there is some generally good reason for doing so, Bennett said. His hypothesis is that coupling of mating and meiosis offers the yeasts an advantage in maintaining their haploid lifestyle by efficiently splitting up the diploid products of mating.

In general, fungi have proven ready to adapt their sexual habits based on their environment, Bennett said. Furthermore, across biology there is an emerging picture that genes involved in sexual reproduction are evolving faster than non-sex genes. But the question of why fungi should prefer a life of haploidy, diploidy, or polyploidy rages as hotly as ever among biologists.

In addition to Bennett, Sherwood, and Scaduto, the paper’s other author is Sandra Torres (now at University of California–San Francisco).