EAST LANSING, Mich. — Peer influence and low self-control appear to be the major factors fueling juvenile cybercrime such as computer hacking and online bullying, according to a new study led by a Michigan State University criminologist.

Thomas Holt, assistant professor of criminal justice, said the findings reinforce the need for parents to be more aware of their children’s friends and Internet activities.

“It’s important to know what your kids are doing when they’re online and who they are associating with both online and offline,” Holt said. 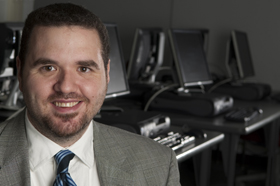 The study, which appears online in the American Journal of Criminal Justice, is one of the first to examine the cybercrime motivations of students in middle and high school. Previous research has focused on college students, creating questions about the causes of cybercrime involvement among youth.

Holt and colleagues conducted a scientific survey of 435 students in a suburban Kentucky school district. According to the study, the biggest predictor to engaging in cybercrime was peer influence – basically, kids whose friends engaged in cybercrime were more likely to engage in those behaviors as well, Holt said.

Cybercrime includes digital piracy (such as stealing music files), viewing online pornography (illegal if under 18), online bullying and harassment (including threatening or sexual messages delivered via e-mail or text message) and cyber-trespassing (which most often involves computer hacking).

Lack of self-control was also a major predictor. Holt said this is more difficult for parents to tackle.

“These are the more risk-taking, impulsive kids; they’re more likely to act on opportunity,” Holt said. “So understanding your children’s potential for behavior is important as well.”

Parental-control software is encouraged, Holt said, although it’s important to note that many kids today can work around these programs.

“It’s not just enough to have a Net Nanny,” Holt said. “Parents need to be more proactive with their kids and discuss these ethical dilemmas to using a computer, such as whether it’s right or wrong to steal music or to download something without paying for it.”

Holt’s co-researchers are Adam Bossler from Georgia Southern University and David May from Eastern Kentucky University.