COLLEGE PARK, Md.- Anyone watching bats skillfully maneuvering through the air to catch their dinner is impressed by how they quickly change direction and speed. Now researchers in the A. James Clark School of Engineering at the University of Maryland believe they have uncovered one of the secrets of bats’ aerodynamic prowess: rows of microscopic, domed hairs on their wings that might act like speedometers and stall indicators.

In a new study published in the Proceedings of the National Academy of Sciences of the United States of America (PNAS), Susanne Sterbing-D’Angelo and her colleagues have found empirical evidence for what researchers have long suspected: the tiny domed hairs function as arrays of sensors that transmit airspeed information to bats’ brains, helping them control their flight and avoid stalling.

These hairs function similar to Pitot tubes, the flight speed and stall sensors installed on aircraft wings. A Pitot tube has two holes-one in the front, and one on the side-that measure airflow pressures as the plane flies. The difference between the pressures at these two measurement points is called “dynamic pressure,” which is used to calculate airspeed.

In the bat, the researchers believe tactile sensing “Merkel” receptors at the base of the hairs-which are about as long as a human hair is thick-might be specialized to sense airflow patterns and therefore help stabilize flight when airflow is disrupted.

The Clark School team studied two bat species: the big brown bat and the short-tailed fruit bat. In a flight test experiment, bats were trained to find a path through an artificial forest. After the bats had learned to negotiate the route, they were filmed twice: before and after wing hair had been removed with a depilatory cream. After hair removal, the bats experienced reduced aerial maneuverability: they flew faster and made wider turns. The researchers believe the bats’ flying speed increased when they were hairless because the lack of sensor information made them think they were flying too slowly and could stall. 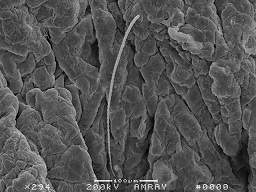 In a separate experiment, the researchers measured electrophysiological response to air puffs from an airflow generator in bats with the domed hair and in those in which hair had been removed. In the bats with hair, the air puffs triggered responses from clusters of neurons in the somatosensory cortex of the bats’ brains, which responds to tactile receptors. The bats whose wing membranes had been chemically depilated showed no such responses.

The neurons responded with directional sensitivity to stimulation of the wing hairs with low-speed airflow. Wing hairs mostly preferred reversed airflow, which occurs under flight conditions when the airflow separates and vortices form. The findings suggest that the domed hairs might represent an evolutionary adaptation for aerodynamic control.

The research is being incorporated into work on bat wing-inspired sensors with Professor Belinda Batten’s dynamics and control research group at Oregon State University. Eventually these sensors could be used to develop a new generation of air speed and stall detectors for aircraft.

Sterbing-D’Angelo is an Assistant Research Scientist with the Institute for Systems Research (ISR), within the A. James Clark School of Engineering at the University of Maryland. The team includes Maryland researchers Mohit Chadha, Chen Chiu, Ben Falk, Wei Xian, Janna Barcelo, and Cynthia F. Moss, along with John M. Zook from the Department of Biological Sciences at Ohio University. At Maryland, the research involved ISR, the Program in Neuroscience and Cognitive Science and the Department of Psychology.