The transformation of the Thu Thiem New Urban Area in Ho Chi Minh City is the focus of a new exhibition in Vietnam by renowned artist Tiffany Chung that is based on research conducted in collaboration with Yale anthropologist Erik Harms.

Titled “an archaeology project for future remembrance,” the exhibition is on view at Galerie Quynh in Ho Chi Minh City.

Harms’ research on urban planning, evictions, and the construction of “New Urban Zones” in Vietnam piqued Chung’s interest in Thu Thiem. According to Chung — who met Harms over a decade ago, when he was in Ho Chi Minh doing fieldwork for his dissertation — the conceptual framework of the exhibitiondrew inspiration from the anthropologist’s unpublished essay “Urban Wastelands and the ‘Laws of the Jungle.’” Harms’ work exemplifies how the story of cultivating wastelands has precedents since the pre-colonial period and continues in present-day Vietnam.

“The project began to evolve into an actual physical act of archaeological excavation, imagining the future ruins of both the currently deserted Thu Thiem and the planned ‘Thu Thiem New Urban Area,’” says Chung in her artist statement describing the exhibition.

Yale anthropologist Erik Harms is completing a three-year study of the demolition and reconstruction of two urban zones in Ho Chi Minh City. This is a view of the eviction and land clearance in Thu Thiem in September 2010. (Photo by Erik Harms)

An excavated concrete slab, two windows recovered from a demolished home in Thu Thiem, and urban planning map drawings of colonial and contemporary Saigon are among the objects featured in the exhibition, which is on view through Jan 10.

“Chung’s ‘archaeology of future remembrance’ sifts through the rubble of development to recapture voices and social spaces that have been rendered invisible by the transformation of a city,” says Harms. “It is not a project of nostalgia, but of remembrance, uncovering — like an archeologist — traces and buried fragments of civilization.” 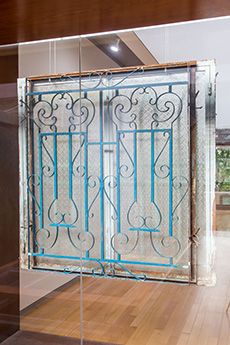 A window recovered from a demolished home in Thu Thiem is on display as part of the exhibition at Galerie Quynh, Ho Chi Minh City. (Photo by Bui The Trung Nam; image courtesy of Galerie Quynh and Tiffany Chung)

Harms also provided background sources and maps to support Chung’s installation “The Galapagos Project: On the Brink of Our Master Plans,” which is currently on view at a second location of Galerie Quynh. One of the maps on display is based on flood predictions for Ho Chi Minh in 2050. In addition, Chung will present her “floating town,” which debuted at the Singapore Biennale in 2011.

Harms, an assistant professor of anthropology specializing in Southeast Asia and Vietnam, is completing a three-year study of the demolition and reconstruction of two urban zones in Ho Chi Minh. Funded by the National Science Foundation, his research explores the physical transformations of the areas and provides a detailed ethnographic record of the social and cultural changes.

As part of his research, Harms and his colleagues spent nine months conducting intensive fieldwork in Thu Thiem and in Phu My Hung. More than 15,000 residents were evicted from Thu Thiem; and many historic and religious buildings were destroyed at the unfinished site. The researchers also interviewed occupants in the completed Phu My Hung zone, one of the city’s most exclusive residential and business areas.

Harms narrates the intertwining tales of displacement and modernization through photos and interviews with relocated residents. Comparative studies at the two sites evaluate different stages in the development of the new urban area concept, notes Harms. “Our research reveals that the luxury and the rubble of the New Saigon are two sides of the same story,” he says.

Harms is the author of the book, “Saigon’s Edge: On the Margins of Ho Chi Minh City” (2011). His research on urbanization in Thu Thiem and Phu My Hung will be the topic of his next book.

Chung’s projects will also be featured at several venues in the United States, including the AD&A Museum, University of California, Santa Barbara, California; the Chao Center for Asian Studies, Rice University, Houston, Texas; and the Museum of Fine Art, Houston, Texas.