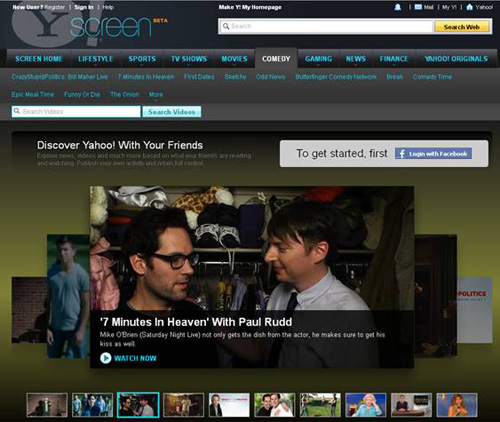 “Yahoo! is already the leader in original storytelling online, with nine out of the top ten shows on the web and provocative, groundbreaking projects like Tom Hanks’ ‘Electric City,'” said Mickie Rosen, SVP Yahoo! Media Network. “Following the success we saw with our slate of programming for women, we’re excited to work with comedy powerhouses like Funny or Die, Broadway Video, Paramount Pictures/Red Hour, Electus/Principato Young Entertainment, David Morgasen and others to continue innovating on our slate programming approach.”

“Yahoo!’s continued efforts to push forward the creativity and originality of premium online content elevates the entire digital entertainment space,” said Drew Buckley, COO and head of Digital for Electus. “We are incredibly proud to launch our new comedy show ‘Sketchy’ with Yahoo! as they are at the forefront of original programming on the Web.”

“We are excited to showcase “First Dates” on the Yahoo! Comedy Channel,” said Dick Glover, CEO of Funny Or Die. “It’s a great series that will resonate well with the Yahoo! audience, and Seth particularly loves the idea of continuing with the series until he, or rather Toby Harris, succeeds in getting to a ‘second’ date.”

“Yes, that would be nice, but until that day comes, it is fortunate for Toby (and yes, let’s face it, for me too), that there are many single girls in Los Angeles,” said Seth Morris, star of “First Dates With Toby Harris.”

Similar to the successful female-targeted slate of programming Yahoo! debuted in October 2011, the Yahoo! Comedy Channel offers marketers a significant opportunity to align their brand with premium content and a “Share of Voice” opportunity to buy against the entire slate of shows.

The Yahoo! Comedy Channel already has top-tier brands signed on as advertisers for the launch of the slate.

Consumer insights indicate that the desire for premium digital video is greater than ever before. Yahoo! is in the strongest position to capitalize on this growing market trend, with the most viewed portfolio of original programming online. Yahoo!’s original programs reel in more viewers than many other websites combined.

Starring Seth Morris, created and directed by Elliot Dickerhoof, produced by Anna Wenger. “First Dates With Toby Harris” is a series that takes us on a journey of ill-fated first dates with the lovable (sometimes deplorable) and always single Toby Harris. Set in Los Angeles, each episode centers around a different woman and issue that will leave the audience bickering about who was right and who was wrong, and how they might have handled it better. Love him or hate him, a date with Toby is a date you will always remember.

“Sketchy” is a weekly video series featuring stand-alone, topical comedy shorts written, directed, and starring some of the biggest names in comedy.

“Odd News” is a weekly Web show, hosted by Greg Proops, that delights and surprises viewers with the funniest, most bizarre, but absolutely real news stories of the week. “Odd News” is consistently in the top ten of the most watched shows online.

From David Morgasen, the director known for classic viral videos like the “David Blaine Street Magic” spoofs and “Obama-McCain Dance-off”, as well as his work on “Jimmy Kimmel Live” comes “Hackerazzi.” It’s like Wikileaks, except instead of classified government documents, it features embarrassing celebrity videos, never meant for us to see. It’s the only place you can see hidden treasures like Mitt Romney busting a move at a fundraiser, Prince William pulling a prank that goes horribly wrong on Kate Middleton, or Donald Trump getting dissed by a parrot. All this thanks to state-of-the-art digital effects.