Avatar Kinect, available today, lets you – or rather your personalized avatar – interact with or hang out with up to seven other friends in 24 virtual stages ranging from a late-night talk show set to outer space to a sports tailgate party. To make the cyber socializing more real, Kinect’s camera tracks gestures and facial expressions – eyebrow raises, smiles, belly laughs and all.

Kinect Sparkler, available later this week, lets players use their fingers to draw sparkling lines that whirl glowing, gold stars in front of, behind, and around 3-D photographs of themselves.

“Avatar Kinect and Sparkler are fun, creative experiences that allow consumers to get a sneak preview of cutting-edge Kinect technologies today instead of waiting until it’s in full-blown games,” says Eric Lang, general manager for the Microsoft Startup Business Group.

About the video: In Kinect Fun Labs’ Avatar Kinect Stand-Up Comedy Fest on Facebook, users will view a handful of comics and their avatars and vote for their favorite. Credit: Microsoft

“We think these are very interesting and important capabilities for the platform – if you think about gaming, it’s all about making the experience more immersive,” says Umaimah Mendhro, a senior product manager for Microsoft Startup Business Group.

Adds Mendhro: “Some of this technology may be realized in games farther in the future, but we worked on these Fun Labs projects to offer a compelling, fun and cool experience that we could deliver today, using the power of Kinect.”

Users can share creations from both Avatar Kinect and Sparkler with the wave of a hand on the Fun Labs Live friends feed or uploading to KinectShare.com. From KinectShare, users can share their creations on Facebook or download them to their computers, email them to friends, and more.

Avatar Kinect makes all kinds of interactive experiences possible – from hosting virtual events to creating your animated shows to just hanging out virtually with friends. Along with using Avatar Kinect to record monologues, or to chat with friends, there is tremendous potential for bloggers and podcasters to use the gadget as a new platform. When it comes to Kinect, including Avatar Kinect and Sparkler, “it’s about forgetting your inhibitions and letting your funny, creative side out,” Mendhro says. 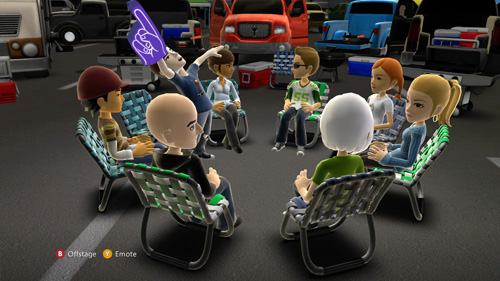 Avatar Kinect lets your personalized avatar interact with with up to seven other friends in 24 virtual stages ranging from a late-night talk show set to a sports tailgate party. Image credit: Microsoft

To celebrate the launch of Avatar Kinect, Microsoft invited a handful of up-and-coming comedians to record stand-up routines – but to perform them as avatars, using some of the virtual stages in Avatar Kinect. The videos will go on the Facebook Xbox fan page, where fans will get to vote for their favorite, and the winning comedian will get his or her routine highlighted by Xbox.

In fact, personalizing the avatar is a big part of the fun. Last week, Maria Bartiromo – anchor of CNBC’s “Closing Bell” and anchor and managing editor of “Wall Street Journal Report with Maria Bartiromo” experienced this firsthand.

“I really like this avatar-based interview,” Bartiromo told Mundie. “And maybe I don’t even have to come to work to do it.” 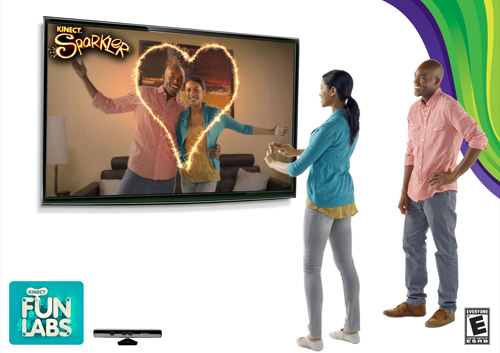 Kinect Sparkler lets players use their fingers to draw sparkling lines that whirl glowing, gold stars in front of, behind, and around 3-D photographs of themselves. Image credit: Microsoft

“It was really funny – when we went to record, Rebecca had to leave the virtual room because she and Amy were wearing the same dress,” Friedman says, laughing.

“It was horrifying!” Oztan says.

The four women say that though Avatar Kinect is for fun, it could be adopted by bloggers and podcasters as another platform for sharing. Friedman says she was impressed by the technology.

“When you’re playing Kinect, you’re seeing your avatar move, but there’s something about seeing it talk and have facial expressions that’s way cooler,” Friedman says. “The first time I saw Kinect, I thought, ‘The future is now,’ but this adds a whole other element that makes it seem that much more personal – like you’re that much more involved in the experience.”

Adds Oztan: “If you guys had seen what I was really wearing and looked like you would have been appalled, but my avatar looked fabulous.”

Kinect Fun Labs, home to several new Kinect innovations, was launched at the E3 conference earlier this year, and is part of a growing catalog of controller-free experiences – including several Kinect and Kinect-enhanced games for Xbox 360 coming this holiday season.

Kinect Fun Labs plans to release new applications (called gadgets) on a regular basis. Avatar Kinect is free for Xbox LIVE Gold subscribers who have Kinect, although it will be available to non-Gold-subscribers for 45 days so everyone can try it, Mendhro says. Kinect Sparkler will cost 240 points on Xbox LIVE.

“We tried to make the technology invisible and focused on the consumer experience. They’ll say, ‘I don’t understand how this works, but I don’t care. It’s cool,’” Wright says. “In addition to putting the latest Kinect technology into games that will come out two years down the road, we’re trying to give it to consumers as quickly as possible.”

Other key ideas behind creating Fun Labs, Wright says, are to help people make social connections and to inspire creativity – even from the Kinect community.

Kinect, which was released prior to last year’s holiday season, became the Guinness World Record holder for the fastest selling consumer electronic device over 60 days. Not surprisingly, a community of Kinect enthusiasts has emerged, including scientists, students and hobbyists.

Wright says people outside Microsoft are constantly thinking of new ways to enhance and use the device and its technology, and Fun Labs is a great avenue.

“We’ve had people submit ideas, and some of them are actually going to get built,” Wright says. “We’re very open to ideas that come from anywhere, and we’ll produce them – the idea is to release gadgets on a regular basis, all focusing on the different Kinect innovations. Kinect is really tied in with its community.”