EAST LANSING, Mich. — Pretreating non-edible biomass – corn leaves, stalks or switch grass – holds the keys for unlocking its energy potential and making it economically viable, according to a team of researchers led by Michigan State University.

Shishir Chundawat, a postdoctoral researcher, and Bruce Dale, professor of chemical engineering and materials science, of MSU led a team of researchers in identifying a potential pretreatment method that can make plant cellulose five times more digestible by enzymes that convert it into ethanol, a useful biofuel. The research was supported by the Great Lakes Bioenergy Research Center, a partnership between the University of Wisconsin and MSU and published in the current issue of Journal of the American Chemical Society.

Currently, ethanol or other biofuels can only be produced in usable quantities if the biomass is pretreated with costly, potentially toxic chemicals in an energy-intensive process. The new discovery could change that.

“What we’ve discovered is something like a cost-effective switch or a lever,” Chundawat said. “By using an ammonia-based solvent, we were able to pull a lever and flip the entire cellulose crystal from one structure to another, one that’s much easier to break down.” 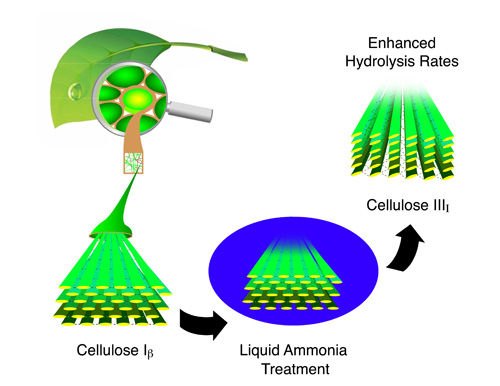 Biomass is a desirable renewable energy source because fermentable sugars within the cellulose network of plant cells can be extracted with enzymes and then converted into ethanol. Unfortunately, it’s a very complicated process, and one of the big difficulties in creating biofuels from plant matter is that cellulose tends to naturally orient itself into a sheet-like network of highly ordered, densely packed molecules.

These sheets stack upon themselves and bond together very tightly due to strong interactions between molecules – somewhat like sheets of chicken wire stacked together and secured by loops of bailing wire. This stacking and bonding arrangement prevents enzymes from directly attacking most of the individual cellulose molecules and isolating the sugar chains within them.

During pretreatment, researchers removed water and increased the ratio of ammonia. The result was seeing the so-called bailing wire being replaced with loose thread, which made it vulnerable to conversion into sugars. The end result is a potentially less costly and less energy intensive pretreatment regimen that makes the cellulose five times easier to attack. While increasing the rate of enzyme success improves biomass conversion, this research also opens the door for future improvement of cellulose-degrading enzymes.

Chundawat and Dale worked with researchers from the GLBRC and the U.S. Department of Energy’s Los Alamos National Laboratory. The GLBRC is one of three Department of Energy Bioenergy Research Centers funded to make transformational breakthroughs that will form the foundation of new cellulosic biofuels technology. The GLBRC is led by the University of Wisconsin, with MSU as the major partner. Additional scientific partners are DOE National Laboratories, other universities and a biotechnology company.