Anamika Mishra hopes to be a pediatrician someday, but right now, she’s studying pennies. “The people who make pennies used different materials, and we’re trying to figure out which is the densest,” she explains.

That’s how Mishra is spending her summer vacation. She is one of 51 high school students who are spending three weeks in an intensive science program that encompasses chemistry, math, psychology, biotechnology and microbial ecology. It’s called the Yale SCHOLAR program, and it is now in its 14th year.

The acronym stands for Science Collaborative Hands-On Learning and Research. It’s a partnership between Yale and Hill Regional Career High School in New Haven. The students — rising sophomores, juniors and seniors at the school — learn two-semesters-worth of material in a mere three weeks, while getting hands-on laboratory experience and hearing lectures by some of the top science faculty members at Yale. 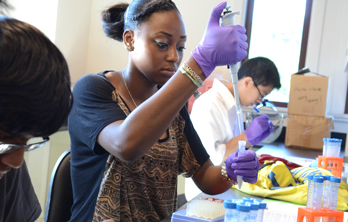 Jana Douglas of West Haven is one of the students who are living and studying on campus this summer through the SCHOLAR program. (Photo by Michael Marsland.)

Joan Steitz, Sterling Professor and vice chair of the Department of Molecular Biophysics and Biochemistry, talked to the students for an hour one afternoon. Steitz says she was impressed by the participants, describing them as bright, polite and attentive, “if a little shy.”

“Perhaps their shyness will be overcome as the program moves on,” she says. “This was only the beginning. Clearly, all the students are privileged to be able to take advantage of this opportunity; they seemed to be aware of this.” Other Yale professors who will talk to the students in the course of the three weeks include Marvin Chun, Laura Niklason, Laurie Santos and Jo Handelsman.

Mishra and her lab partner, Dayshalis Ofray, both rising juniors from New Haven, are among 15 students in the chemistry lab on this particular day who are trying to figure out which of the pennies produced between 1977 and 1987 is most dense. The U.S. Mint changed the composition of pennies in 1982 from nearly all copper to nearly all zinc with just a smattering of copper.

The penny-measuring experiment is not just academic; it’s also a bit of a competition for bragging rights. Athalie Cayo, a rising junior from Ansonia, thinks she knows which penny will win. “I think it’s going to be 1981. My calculations show that that’s when the density changed.”

Kyle Catubig, from West Haven, has a different opinion. “The density changed significantly in 1982. It was more dense before, and less dense after. 1977 will probably be the densest.” Ofray thought the “Most Dense” winner would be 1982, while Mishra thought it would be 1987.

Connie Allen, provost and chief academic officer at Saint Augustine’s College, has been teaching this chemistry class for several years. “By the time they get done,” she says, “they’ll be able to tell us if their hypothesis was correct or not. And it’s fine if it’s not. Actually, it’s more meaningful because they learn much more.”

For the three weeks of the program, the students leave their high school lives behind and become true Yalies. They eat and sleep at Jonathan Edwards College and take their classes and labs on Science Hill. The curriculum is designed by faculty from Yale, with the support of teachers and advisers from Career High School, Yale’s graduate and professional schools and the SCHOLAR faculty.

The SCHOLAR program began in 1998 to help motivated and academically talented Career High School students prepare for success in college and their careers. In the 14 years of the program, every SCHOLAR student has attended college upon graduation from Career High School, with many of them going on to careers in the sciences and health professions.

Program organizers began tracking former students last year, going back to the program’s inception. “The preliminary data is promising,” says Claudia Merson, director of public school partnerships in Yale’s Office of New Haven and State Affairs. “We have found that students who participate in our program are three times more likely to complete college within six years. Additionally, 39% of the students have completed degrees in a science-related discipline. This is much higher than the national average.”

The teachers gain from the experience as well. “I love it. I always come back,” says Allen. The students return to their high school classroom as leaders, she says, and as examples for their peers. But the best part, Allen says, is seeing their faces when they achieve something difficult. “Chemistry has a reputation of being a bear, and it is,” Allen says, “But over the three weeks you can see their level of confidence rising. Chemistry is the kind of thing that requires persistence and perspiration, but they believe they can do it through sheer will — and they do.”

Science journalist, author and Yale lecturer Carl Zimmer, whose latest book is called “A Planet of Viruses,” also had his turn with the kids. He talked to them about the enormous role that microscopic viruses play in our existence. “I thought the students were a great audience,” he says, “They peppered me with the kind of question that tells me they were listening closely to what I had to say.”

He adds: “I think this sort of program can have a huge effect on a student’s path long after high school. Their teacher told me how they would be studying the DNA of bacteria and viruses they find around New Haven. I wish I could have done that when I was 15.”

The penny experiment may seem elementary, but Allen says what the students learn is priceless. “Right now they’re learning to speak the language of chemistry, which means understanding the terminology and how to apply problem-solving techniques to chemistry. In the past few days, what they’ve really been doing is dimensional analysis.”

The students have an additional motivation. Cayo says, the Yale course “covers everything we’ll be doing next year in high school, so it gives me a heads up.” Mishra agrees. “The math I’m doing in this course will help me. Everything we’re doing now in three weeks, we’ll be doing all next year.”

But back to the pennies. The density did in fact change in 1982; pennies made up till that year were denser than those made in the years that followed. But, avers Allen, “All of the students won.”

The point of all this, of course, is about learning. Catubig sums it up. “I’ve learned that you can have fun while learning. These guys teach us how to learn new things, even though they’re really challenging. Was it a fun way to spend the summer? Yes.”

Cayo echoes the sentiment. “We learned about elements and how chemistry works with math. What was the most fun? The lab. You get to wear goggles and be little scientists, and work in a real lab. It’s not fake.”