Sian Beilock, lead author of a new study that appears on January 13 in the journal Science, says writing about test-related worries for ten minutes immediately before taking an exam is an effective way to improve test scores in classroom settings.

“By writing down one’s negative thoughts, students may come to realize that the situation is not as bad as they thought or that they are prepared to take it on,” said Beilock, an associate professor of Psychology at the University of Chicago. “As a result, they worry less during the test.”

Her study, “Writing about Testing Worries Boosts Exam Performance in the Classroom,” was funded by the National Science Foundation’s Directorate for Education and Human Resources.

“Understanding performance strategies that help people overcome memory limitations in high-pressure situations is an important goal of this research,” said Gregg Solomon, a program director in the directorate’s Division of Research on Learning in Formal and Informal Settings. 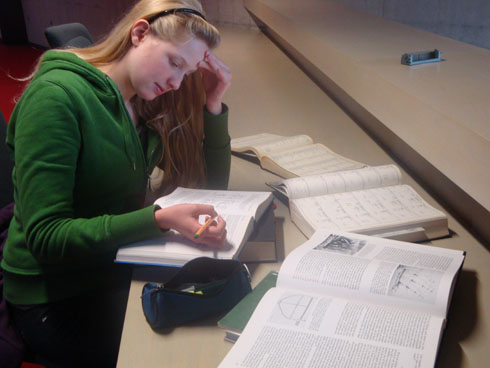 Writing down one's negative thoughts before an exam may help students get better grades according to a new study by researchers at University of Chicago.

“Other researchers have shown that expressive writing can help people decrease worries, but Beilock and her co-author wanted to test the benefits for students in the classroom.”

But students who get particularly anxious about tests taking saw their scores on high stakes exams go up nearly one grade point after they wrote about why they feared the test’s outcome.

The researchers concluded that the writing exercise provided students an opportunity to unload their anxieties before taking the test and thereby freed up brainpower needed to perform successfully–brainpower that is normally occupied by testing worries.

Beilock, who is also the author of a recently published book about mental logjams called “Choke: What the Secrets of the Brain Reveal about Getting It Right When You Have To,” said the findings of this new research are somewhat counterintuitive. Writing about anxiety before a test, it seems, would cause the worries to crystallize and manifest themselves, not alleviate them.

“But, once you know some of the science behind test anxiety, expressive writing and test performance, it makes sense,” she said.

It has been suggested that writing about one’s thoughts and feelings regarding a particular event or situation reduces one’s tendency to ponder negative consequences because it allows individuals to reexamine the situation such that the need to worry is decreased.

“If worries use up important thinking and reasoning resources that could otherwise be devoted to exam performance and writing eliminates these worries, then students’ performance should improve,” said Beilock.

The researchers say this type of writing may help people perform their best in variety of pressure-filled situations–whether it is a big presentation to a client, a speech to an audience, or even a job interview.