Worm study may resolve discrepancies in research on aging

Brown University researchers may have discovered what’s responsible for discrepant findings between dozens of fundamental studies of the biology of aging. A drug commonly used in research with C. elegans worms, they report, has had unanticipated effects on lifespan.

PROVIDENCE, R.I. [Brown University] — In matters of the fundamental molecular biology of aging, we mammals are not so different from tiny C. elegans worms. Some of the biggest differences only serve to make them convenient research models. But one distinction – their ability to asexually reproduce exact copies of themselves – may have led to many research discrepancies. The reason, according to a new Brown University-led study, is that the drug scientists use prevent such confusing reproduction turns out to help aging worms rebound from stress, thereby significantly lengthening their lifespan in some cases. 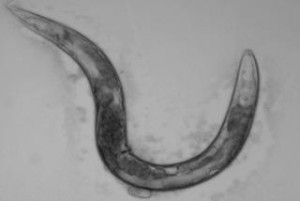 A model of aging. The C. elegans worm serves as a useful model in aging studies, including a new one that reveals the unintended role of a drug. Photo credit: Anne Hart

In the study in Mechanisms of Ageing and Development, neuroscience Professor Anne Hart, lead author Edward Anderson and colleagues identify the human chemotherapy drug FUdR as the culprit. Their detailed experiments show that the drug goes well beyond squelching worm reproduction. It also triggers stress response and turns on DNA repair pathways (that are also found in mammals) that allow the worms to better endure adverse conditions such as saltiness, heat, or low oxygen.

“We can explain a lot of the disagreement in the C. elegans aging field by realizing that FuDR can dramatically change the answer,” Hart said.

Reviewing dozens of studies with discordant findings across many genetic models of worm longevity, Anderson found that a consistent difference-maker was using FUdR.

“There were very different effects in published papers that had different doses of FUdR in them,” said Anderson, formerly a technician in Hart’s lab and now a biology graduate student at Brown. “Sometimes it’s a very profound disagreement.”

Moreover, some other studies may involve FUdR-related discrepancies but insufficient documentation of the methods prevented Anderson from being sure.

One of the first studies Anderson examined was a mysterious one from within the Hart lab that had employed FUdR in the conventional way for an aging study, leading to results they couldn’t reconcile with published results.

“We didn’t expect to have this happen,” Hart said. “We decided to figure out what was going on.”

They started to suspect FuDR might be the difference. Studies were beginning to enter the scientific literature – and rumors were welling up at conferences – suggesting it might affect more than just reproduction in worms.

To truly prove it or rule it out, they began a series of experiments testing FUdR’s effects in the worms and found that rather than simplifying their experiments on worm longevity, the drug was indeed dramatically changing their results.

In the absence of any stress, FUdR makes no difference to lifespan in normal worms, they confirmed. But when worms were exposed to a modest concentration of salt, animals who were not exposed to FUdR had only half the lifespan of those who were exposed to the drug. Meanwhile, adding even more FUdR caused even longer lifespan under salt stress. A tenfold increase in FUdR concentration extended lifespan by a factor of three. Other experiments suggested that FUdR causes better stress resistance in hot or low-oxygen conditions.

Further research revealed details of how FUdR protects the worms from stress. They found evidence that the drug turns on the gene that produces the protein “FOXO,” a master regulator of stress resistance in many organisms that is often central in longevity studies. They also found that exposure to FUdR forced DNA mutations that then activated a DNA-repair process. That process, once activated, also fixes a lot of DNA damage caused by environmental stresses, including dreaded “double-strand breaks,” a clean severing of the DNA molecule.

While many scientists in the biology of aging field may now find it helpful to reconcile disparate results of the past, Hart said, the new findings should also give them pause about continuing to use FUdR in the future.

It’s now clear that the drug has high potential to confound aging studies, the authors wrote. If it’s to be used at all, then it’s important for scientists in their published research to be very clear about if it was used and to state the genetic lines of worms and experimental conditions of the research.

But, it may be best not to use it at all, they wrote.