Data from the research plots on Tumamoc Hill reveal changes in the Sonoran Desert and have been important to key advances in the science of ecology.

Researchers at the University of Arizona’s Tumamoc Hill have digitized 106 years of growth data on individual plants, making the information available for study by people all over the world.

Knowing how plants respond to changing conditions over many decades provides new insights into how ecosystems behave. 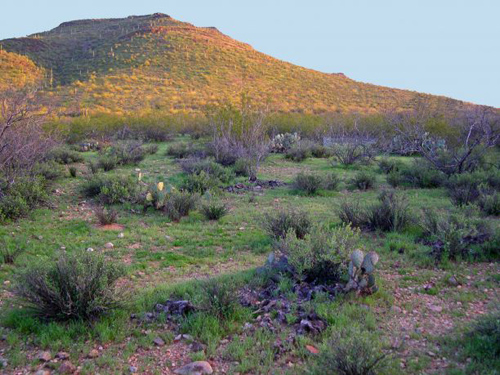 Looking toward Tumamoc Hill from the northwest side. (Photo courtesy of the Venable lab/UA department of ecology and evolutionary biology)

Some of the plots date from 1906 – and the birth, growth and death of the individual plants on those plots have been periodically recorded ever since.

The century-long searchable archive is unique and invaluable, said Venable, a UA professor of ecology and evolutionary biology who has been studying plants on Tumamoc since 1982.

The records have allowed scientists to estimate life spans for desert perennials, some of which are very long-lived, Venable said.

In addition, data from the plots on Tumamoc Hill reveal changes in the Sonoran Desert and have been important to key advances in the science of ecology.

For example, the Tumamoc plant censuses helped overturn the long-standing idea that plant communities progress through a series of steps to a stable collection of species known as a climax community.

“The desert wasn’t progressing toward a climax community,” he said. Instead of being in synch, each species and plot was changing to its own rhythm. 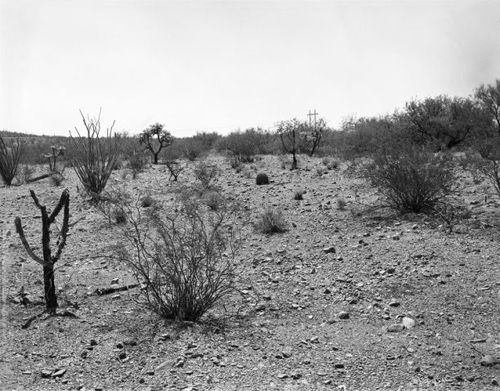 1958: This photograph was taken in 1958 by stake 912 in a flat area in the western part of the Desert Laboratory grounds. The plot’s dominant shrubs are creosote bush (Larrea tridentate) and white ratany (Krameria grayi) plus some triangle-leaf bursage (Ambrosia deltoidea) and species of cholla cactus. (Photo credit: Raymond M. Turner/U.S. Geological Survey)

Rodriguez-Buritica, a postdoctoral research associate in the UA department of ecology and evolutionary biology, Venable and their co-authors Helen Raichle and Robert H. Webb of the U.S. Geological Survey and Raymond M. Turner, formerly of USGS, have published a description of their data in the Ecological Society of America’s journal Ecology and archived the data set with the society.

The title of their paper is, “One hundred and six years of population and community dynamics of Sonoran Desert Laboratory perennials.” The National Science Foundation, the USGS and the U.S. National Park Service funded the archiving.

Landmark research on the physiology and ecology of desert plants has been conducted on Tumamoc Hill ever since the Carnegie Institution of Washington established the Desert Laboratory there in 1903 to study how plants cope with living in the desert.

The first permanent plots, generally 33 feet by 33 feet (10 meters by 10 meters), were established in 1906 by Volney Spalding; nine of his original plots remain to this day. Additional plots were established by Forrest Shreve in the 1910s and 1920s. Two more plots were added in 2010. Currently, there are 21 plots.

For every perennial plant within each plot, the ecologists recorded the species, the area the plant covered and its location. Even seedlings were identified and mapped.

In addition to the written records, repeated photographs of the plots have been taken since 1906. Those photographs are in the Desert Laboratory Collection of Repeat Photography at the USGS in Tucson, Ariz. 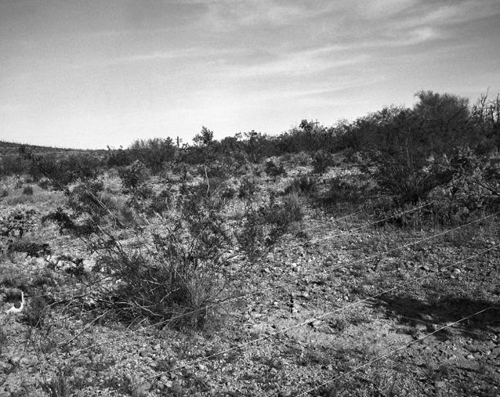 1978: Taken 20 years later from the same spot, this 1978 photo shows that the same species are dominant. All the species had increased their cover inside the plot. A new species, whitestem paperflower (Psilostrophe cooperi) had appeared in the plot. Good growing conditions in 1978, including good rains, fueled the increase in ground cover by both annuals and seedlings of perennial plants. (Photo credit: Raymond M. Turner/U.S. Geological Survey)

Over the years, botanists and ecologists have helped census and re-census the plots. Co-author Turner took over the work when he came to the UA as a botany professor in 1957, continued while a botanist for USGS and continues to do in retirement. In 1993, co-author Webb took up the project and is keeping the censuses going.

Sorting through data recorded from 2012 back to 1906 was a huge challenge, said Rodriguez-Buritica. She had something to build on: Janice Bowers of USGS had begun to archive the records but retired before finishing. Initially, Rodriguez-Buritica and Venable thought a year would do it – but the task ended up taking much longer.

The records were in several places – some at the library or in storage at Tumamoc and some in the UA library’s Special Collections.

One of the challenges Rodriguez-Buritica faced is that methods of collecting and recording information about plants have changed over time.

Spalding, who established the very first plots in 1906, worked long before the age of computers – he recorded his observations in a small notebook. Ecologists continued to record their field observations in paper notebooks and created maps on graph paper well into the latter part of the 20th century.

All those paper records had to be digitized.

Only in the last 20 years have scientists been pinpointing plant locations and other observations directly onto a map within their computers by using GPS and GIS technology.

Upon reviewing and checking the data, Rodriguez-Buritica realized that she needed to standardize the information collected over a century so that other scientists could analyze it.

Her expertise in applied statistics and spatial ecology was perfect for the job.

She also computerized the series of maps created over time so new investigators could see all the plant location maps created since 1906.

By putting all the information into a standardized digital format and making it easily accessible on the Web, Rodriguez-Buritica, Venable and their colleagues have ensured that other researchers can build on and expand this unique data set.

Tumamoc Hill is one of the birthplaces of plant ecology, Venable said.

“In the first half of the 20th century, all the great plant ecologists either worked here or came though here,” he said. “Plant ecologists from the Desert Lab were key in founding the Ecological Society of America and its flagship journal, Ecology. It is satisfying to see the project come full circle and be permanently archived 100 years later by the journal that these researchers started.”

The Desert Lab and Tumamoc Hill have been designated as a National Environmental Study Site, a National Historic Landmark, an Arizona State Scientific and Educational Natural Area and are on the National Register of Historic Places.