Coral reefs are in decline, but their collapse can still be avoided with local and global action.

That’s according to findings reported in the Cell Press journal Current Biology on May 9th based on an analysis that combines the latest science on reef dynamics with the latest climate models.

“People benefit by reefs having a complex structure – a little like a Manhattan skyline but underwater,” said Peter Mumby of The University of Queensland and University of Exeter. “Structurally-complex reefs provide nooks and crannies for thousands of species and provide the habitat needed to sustain productive reef fisheries. They’re also great fun to visit as a snorkeler or diver. If we carry on the way we have been, the ability of reefs to provide benefits to people will seriously decline.” 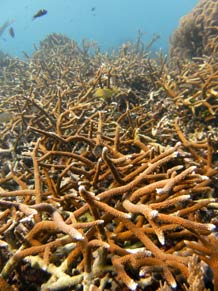 To predict the reefs’ future, the researchers spent two years constructing a model of how reefs work, building on hundreds of studies conducted over the last 40 years.  They then combined their reef model with climate models to make predictions about the balance between forces that will allow reefs to continue growing their complex, calcium carbonate structures and those such as hurricanes and erosion that will shrink them.

Ideally, Mumby says, the goal is a carbonate budget that remains in the black for the next century at least. Such a future is possible, their model shows, but only with effective local protection and assertive action on greenhouse gases.

“Business as usual isn’t going to cut it,” he said. “The good news is that it does seem possible to maintain reefs – we just have to be serious about doing something. It also means that local reef management – efforts to curb pollution and overfishing – are absolutely justified. Some have claimed that the climate change problem is so great that local management is futile. We show that this viewpoint is wrongheaded.”

Mumby and his colleagues also stress the importance of reef function in addition to reef diversity. Those functions of reefs include the provision of habitat for fisheries, the provision of a natural breakwater to reduce the size of waves reaching the shore, and so on. In very practical terms, hundreds of millions of people depend directly on reefs for their food, livelihoods, and even building materials.

“If it becomes increasingly difficult for people in the tropics to make their living on coral reefs, then this may well increase poverty,” said Emma Kennedy, a PhD student that developed the models at the University of Exeter. “It’s in everyone’s best interest to keep that from happening”.

The research took place in the Caribbean under the EU-funded project Future of Reefs in a Changing Environment (FORCE). Prof Mumby is part of the Australian Research Council Centre of Excellence for Coral Reef Studies.